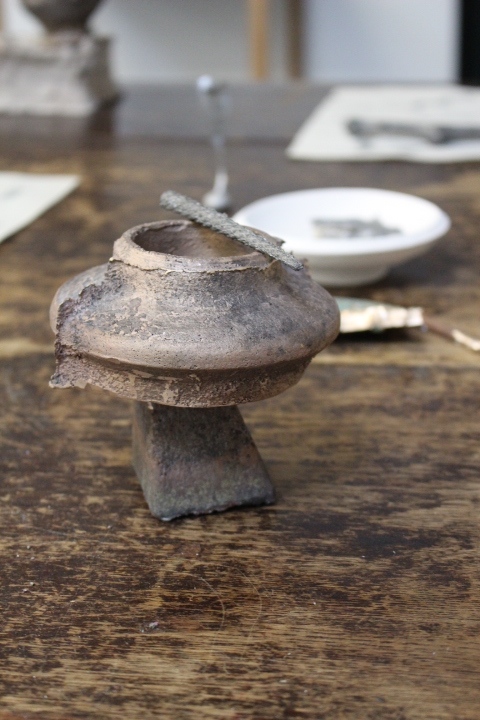 Over the course of her residency, Roos worked with metal casting and ceramics, taking inspiration from standing stones in the area and Pictish imagery. Roos held a workshop with pupils of the Lumsden Primary School and culminated her time at SSW with a group walk in collaboration with SSW AiR artist Gentian Miekleham.

Roos has written the following post about their Artist Led-Exchange Residency:

In my practice I usually study various ecosystems and consider the psychological and physical relationships of human behaviour connected to their environment and nature.

I wanted to focus on a liberation, invigoration of sorts through collective action for this residency. An activity that would embody people to feel and think in present time, to give them a chance to respond to their environment in a magnetic way. Encouraging an intuitive, potentially spiritual connection to their surroundings.

“​what is original does not come from absolute nothing (“oblivion”), but from an electromagnetic tenderness–from remembering not forgetting​.” – Timothy Morton in convo with Björk.

I was inspired by the number of standing stones in the North East area, especially in Aberdeenshire and how these monuments absorb so much time and energy spent, like a portal with their symbols speaking to you. It made me think about animism, that in each object there is a soul.

This ancient form of expression used for landmarks or to commemorate an identity, for legacy or to mark a heightening of perception, lead me to design and produce percussion steel tools taken from Pictish symbolism and sacred new age bronze objects. This involved learning new techniques in mould making, ceramic throwing and metal casting. These objects became the props with which participants could summon, release or interpret their feelings, using the object like an instrument, resonating a sound.

“rituals create a heightened state of consciousness and very interesting moments of awareness, while social gatherings are the marketplace for breaking habits, or for finding ways to embody discomfort…” – Johannes Paul Raether

I visited the Lumsden Primary School in my second week on residency and ran a workshop using the schools percussion instruments and a microphone. The class is a mix of primary 1 – 7 and there are 17 pupils in total, all very musically intuitive. We started the class with a megalith drawing exercise considering what icons their standing stone would reveal and where it would be placed in their local landscape. Examples included enchanted forest fossils, Justin Beiber, their favourite church, Pokemon, family and youtube channels. We went on to invent what sounds and words these standing stones would make and then performed them using an instrument of their choice. Playing as a group resulted in this musical chant, each pupil improvising their sounds and myself on the microphone calling out their words.

The residency allowed for a lot of experimentation like this and in terms of processes and concepts too. Including an opportunity to collaborate with a fellow resident, Gentian Miekleham and incorporate a walk as part of my exchange event. This opened discussion on the relevance of walking to empower people and how the activity is an art form.

Gentian was working with found objects she took from the landscape, thinking about time, trace and collecting as corresponding with experience and exchange. Together we were interested in using the objects I made as tools and also reference points to find your own rhythm and communicate your actions and thoughts during the walk. We were inspired by the words of Rebecca Solnit in Wanderlust:

“..such walking is a bodily demonstration of political or cultural conviction and one of the most universally available forms of public expression..”

“…and so marches can themselves be liminal, another form of walking into the realm of the representational symbolic..”

“..public marches mingle the language of the pilgrimage, …ones persistence by pacing back and forth, and the festival , in which the boundaries between strangers recede​.”

We visited sites together to view local monoliths, ruins and spent some time in rural graveyards..! During the process of deciding which route to take with the walking group, we were discussing the links between changes in terrain with how your mood and thinking shifts. On our second instance reaching the top of what was claimed as ‘ghost hill’ that overlooks Lumsden, I was drawn to this electricity pylon that stood there as a modern day monument. It made me think of a standing stone, telepathy, sending communication and energy through its wires from one point to the next.

On Thursday evening 6th of July strangers and friends gathered in the ssw studios to be introduced to the project and small interactive display. Here you could select your tool and experiment with noises using mics and a loop pedal. Along with Genni’s copper and iron casted poppy heads, sticks and pine cones. As we left the ssw site to begin our walking ceremony, we asked all participants to stay as close together as possible so we could find our average pace as one unit, which included a mix of ages. The pylon at the top of the hill became a monument to perform our collective improvised soundscape to, taking in the views, the company and each person’s beat.

Thank you to all the participants who came on the walk with us. Thank you to Genni Miekleham, Joanne and Lumsden Primary School, all of those at SSW, incl. Yvonne, Uist, Eden and Andrew who helped with production, facilitation and organising <33