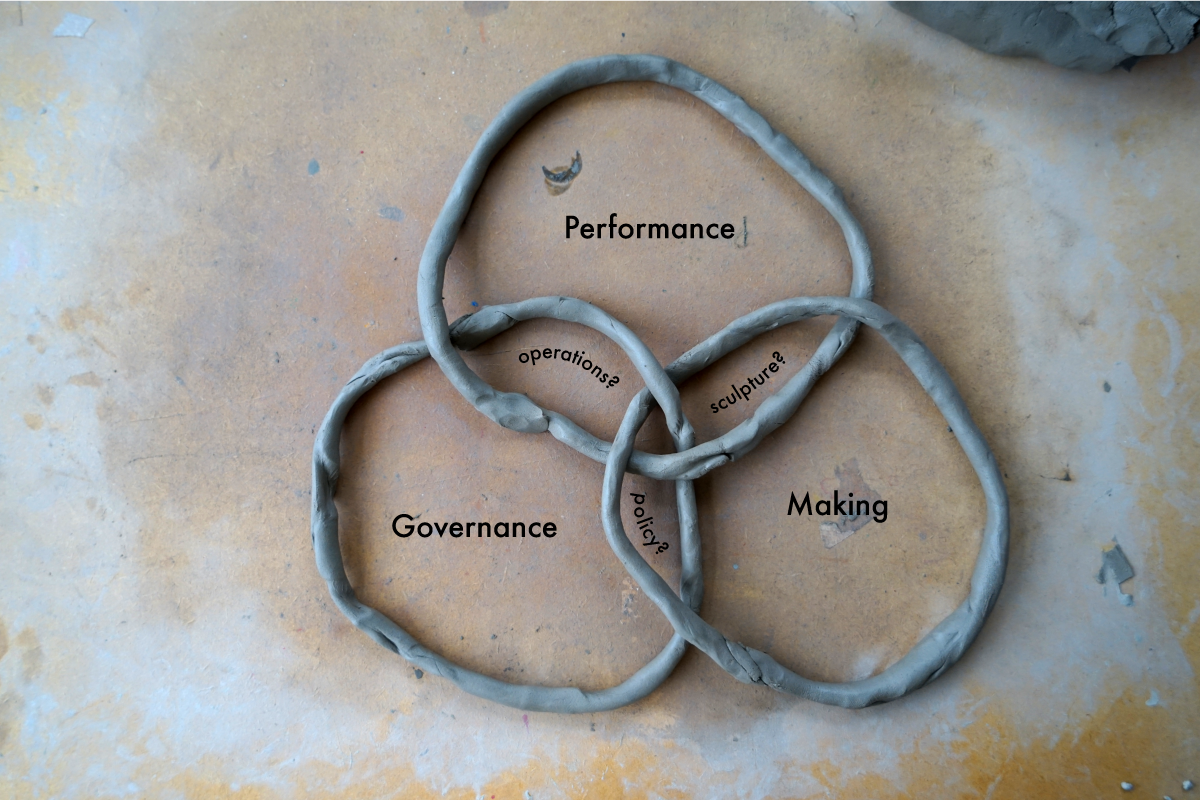 From Spring 2021, Scottish Sculpture Workshop will be working with artist Jack Tan on a BEPART Fieldwork to develop new ideas and approaches to how arts organisations can be governed and run, through sculpture and performance making.

Jack will facilitate a series of workshops at SSW, in which an invited diverse group of SSW’s community stakeholders will practice ceramics, blacksmithing and bronze casting in tandem with exploring SSW’s policy, legal and constitutional documents. Together they will create what Jack calls “policy performance scores”, which will be tested and performed in the day-to-day running of SSW.

Working with Jack and the skilled technicians at SSW, participants will learn to mould metal, while for example, discussing what conditions are necessary to mould and train employees. The group may attempt to understand risk management through making and repairing large hand-built or Raku-fired ceramics. The process of shaping hollow moulds in bronze casting could inform how an organisation can define and fill organisational voids through recruitment of human (or more-than-human) resources.

By working together to form a workshop-boardroom counterpoint, Devising Governance seeks to bring together organisational knowledge, material knowledge and collective decision making.

The project will culminate in the integration of the groups’ policy performance scores with SSW’s Staff Handbook, alongside a public presentation.

Jack Tan (UK) uses law, social norms and customs as a way of making art. He creates performances, sculpture and participatory projects that highlight the rules that guide human behaviour. Jack trained as a lawyer and worked in civil rights NGOs before becoming an artist. Recent projects include Four Legs Good (2018) a revival of the medieval animal trials for Compass Festival Leeds and V&A London; his Singapore Biennale presentation Voices From The Courts examining the vocality of the State Courts of Singapore (2016), Law’s Imagination (2016) a curatorial residency at arebyte exploring legal aesthetics; his solo exhibition How to do things with rules (2015) at the ICA Singapore; and Closure (2012), a year-long residency and exhibition at the UK Department for Health looking at the liquidation of their social work quango.

Jack’s Ph.D at Roehampton University explored legal aesthetics and performance. He will be co-editing a special issue of the Law & Humanities journal in 2022 on art-law practice and processes. Jack has also taught sculpture at the Royal College of Art and University of Brighton, politics at Goldsmiths and is a tutor in ‘Law as Art’ in the New School of the Anthropocene. Jack is based in Dumfries and Galloway, Scotland. Read more about Jack’s practice on his website: http://www.jacktan.net/

BE PART is made possible with the support of the Creative Europe Programme of the European Union.