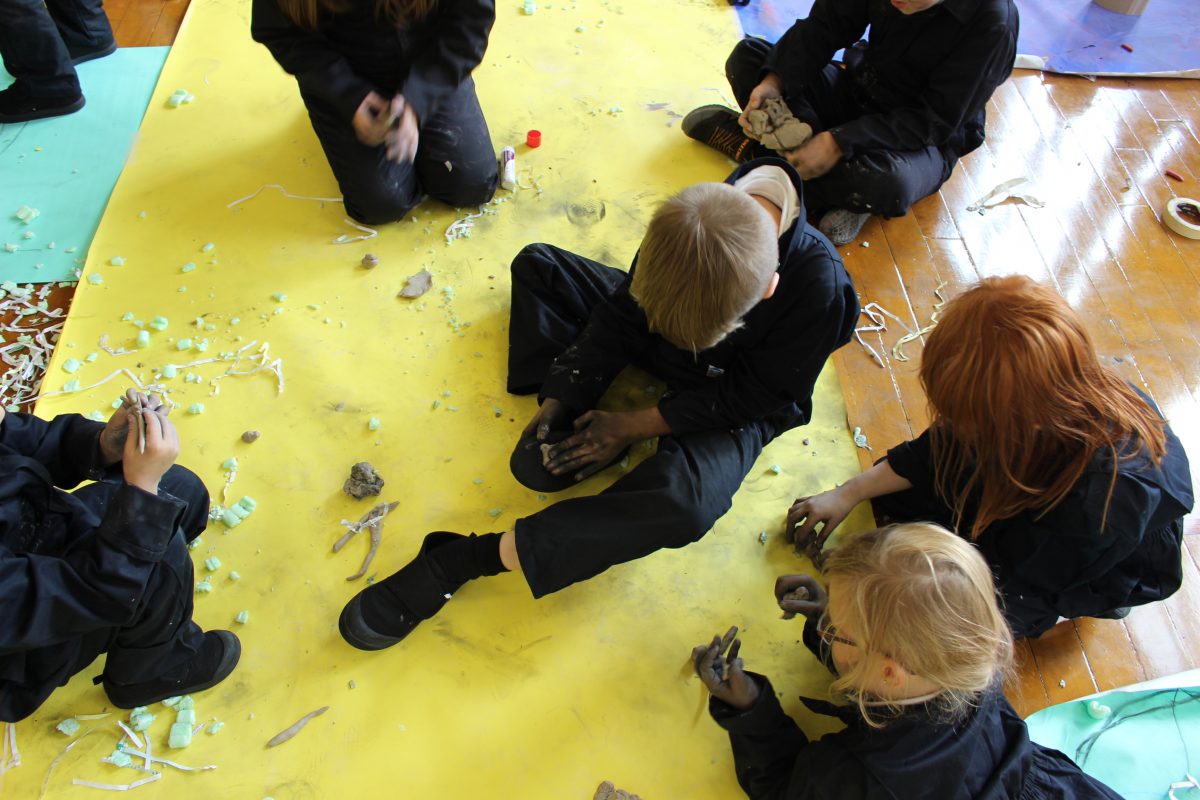 The third and final of our 2018 Lumsden residency programme artists, India Harvey, joined us for the month of August to undertake a month-long residency alongside the second of our Summer residency groups. India, as an artist and playworker, is particularly interested in linking internal and external experience, facilitating simultaneously private and participatory sites of co-production and attempting to consider difference as a positive universal. India’s reflection below shares the experience of working with Lumsden School in August 2018, and gives an insight into what to expect in Tipping Point, India’s interactive, sculptural playscape, produced with young people in Lumsden for the Lumsden Weekender.

School is an intimate place, both a safe testing ground and strange new world. How does a rural school with a student body of less than 20 differ to my experiences of crowded educational environments in an urban context? What does expressive resilience look like in a place characterised by slow, calm and quiet? How can the student body be recognised and recognise each other as specific individuals, but stay reliant on one another for support and development in relation to more propriocentric and imaginative play and a specific (or more localised) social understanding?

We met in the school playground, with a game developed together in which students had to accept and build by changing imagined forms through rock/paper/scissors. The energy of the group oscillated between chaos and deep concentration, always with a focus on developing the play possibilities of the presented situation.  Our attention moved to some of the props I had brought with me- and so we started to experiment with how they could be used as a group- a giant rubble sack was the favourite and the group realised that all together we could lift one big person or two small people off the ground. The deal/game was that ultimately I’d get in the bag. We thought and learned though risk and trust, feeling the weight of the person and how they could be supported in a bubble of energy and excitement. 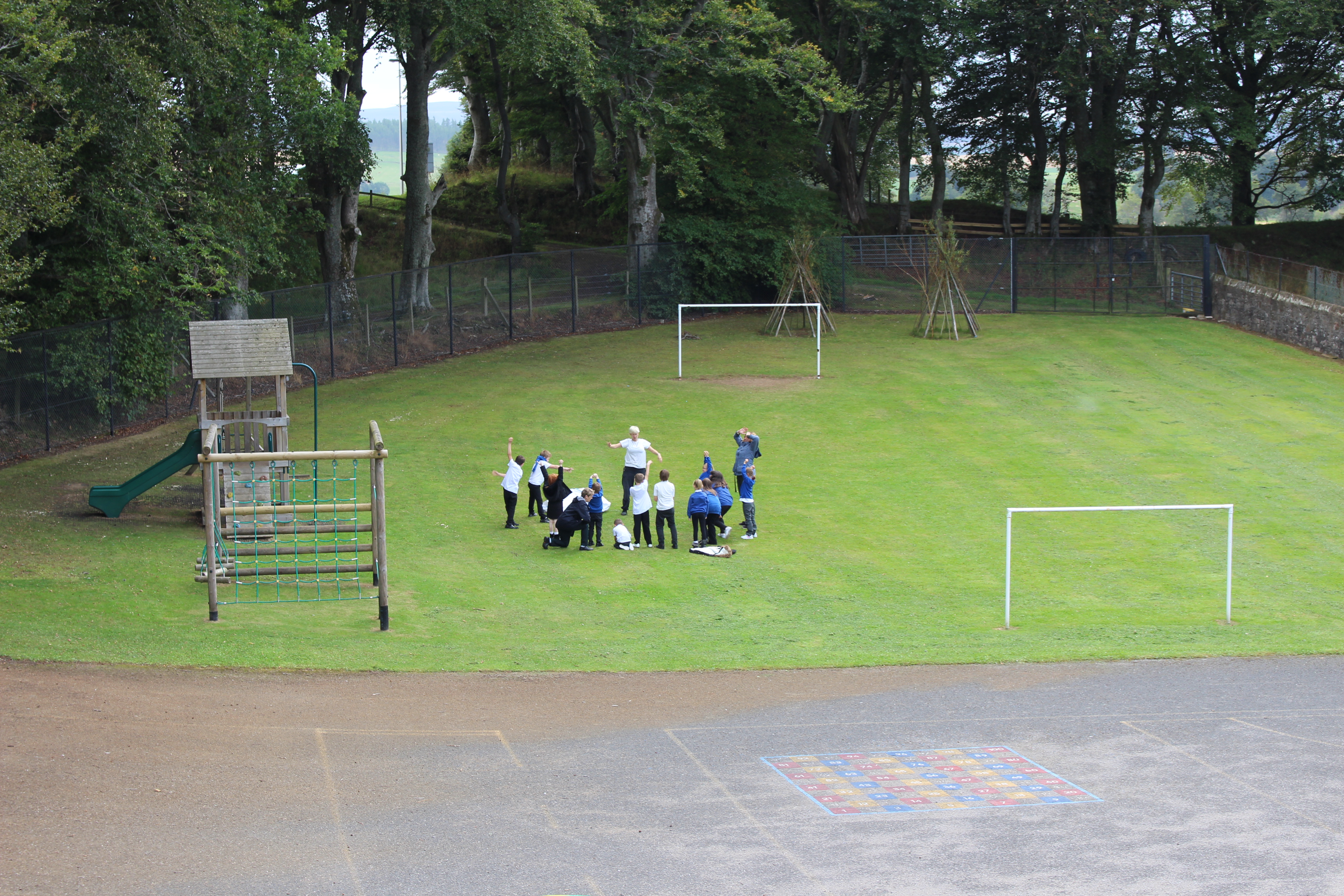 Back in the school hall, in pairs we worked on a network of paper materials and shapes, we drew with eyes closed and hands over hands, intuitively mark-making, thinking through amplified sound rather than our eyes. Trusting our senses and playfully collaborating- chalk and charcoal becoming dusty powder crushed in hands and under feet, later becoming face-paint and a new way of drawing. 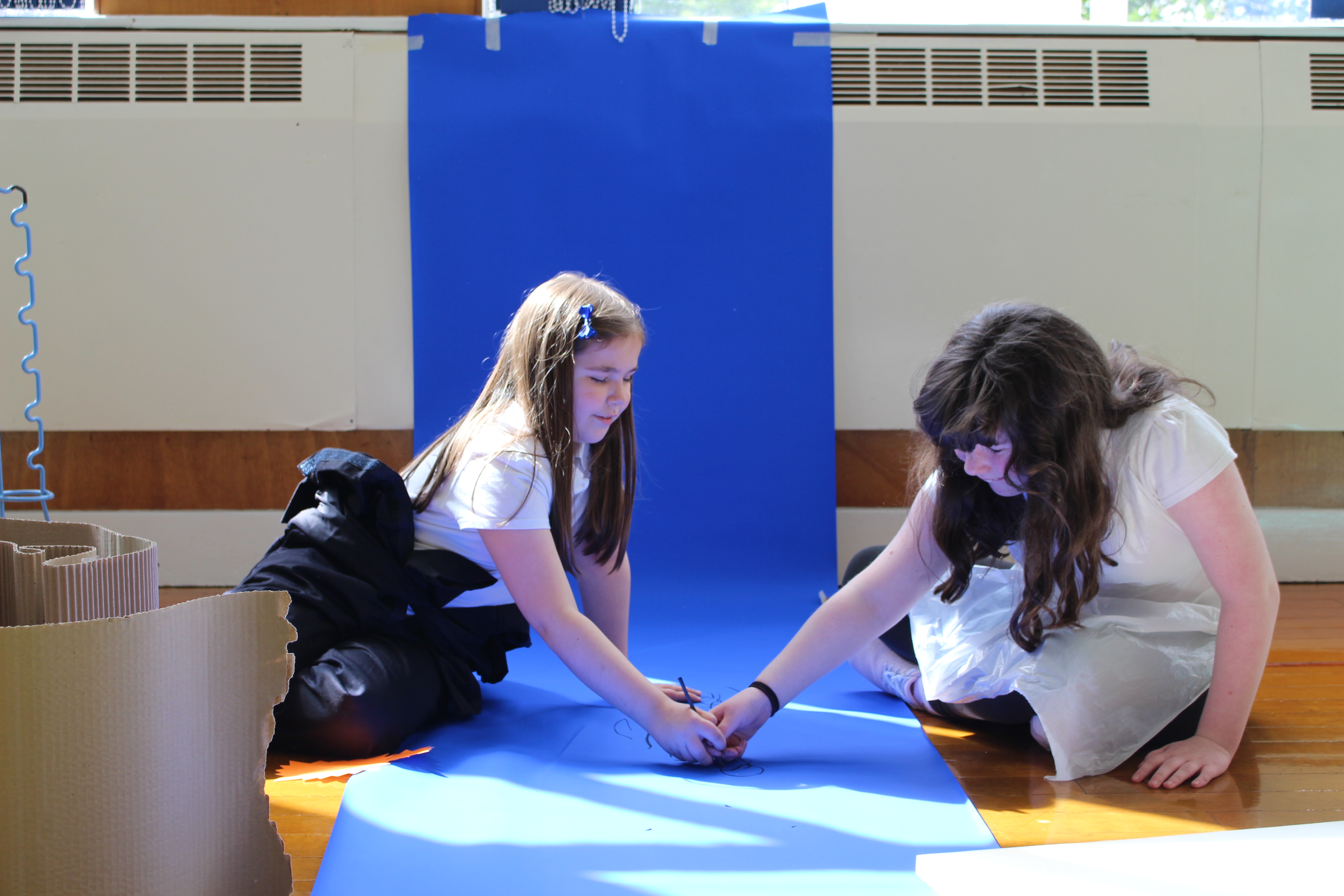 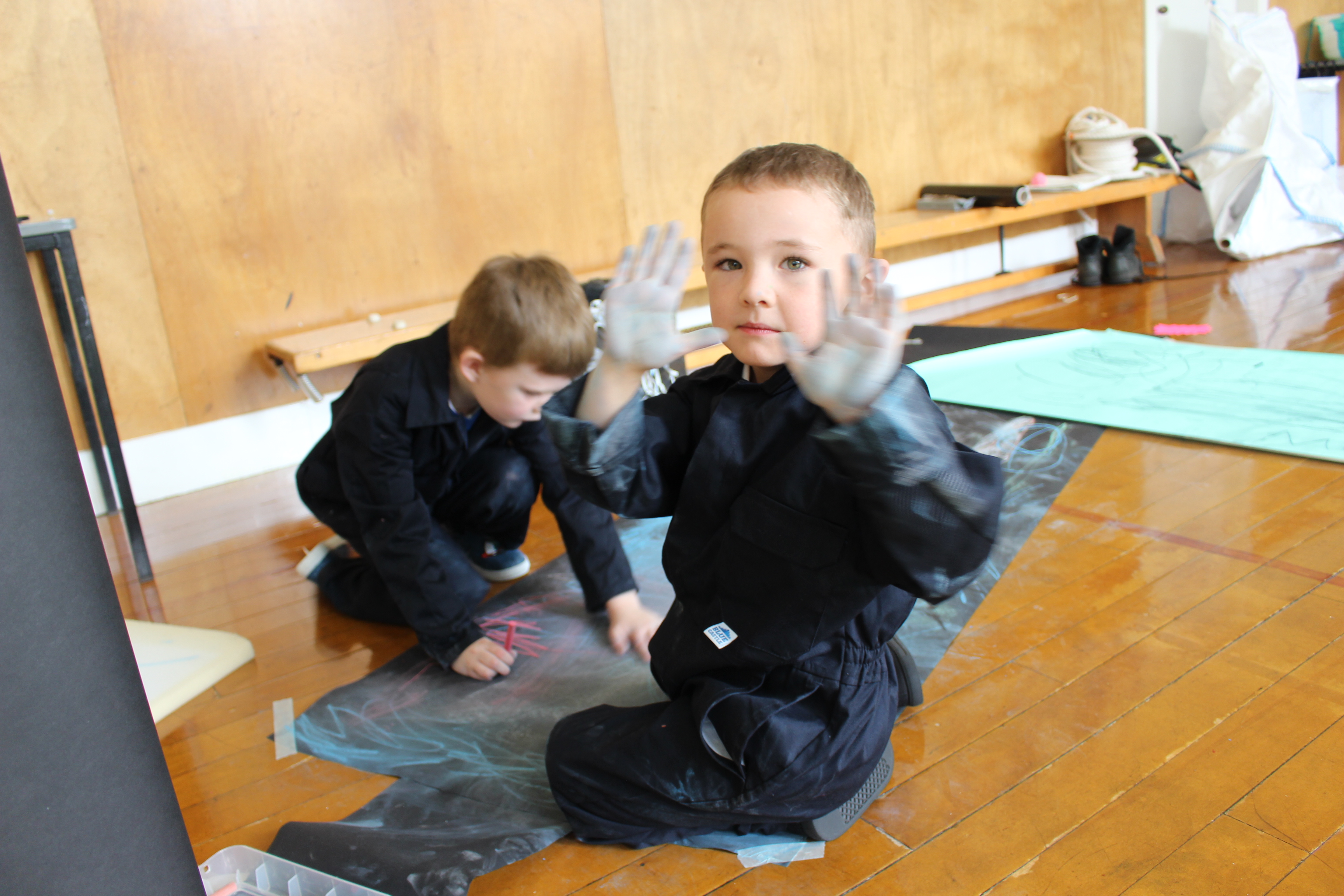 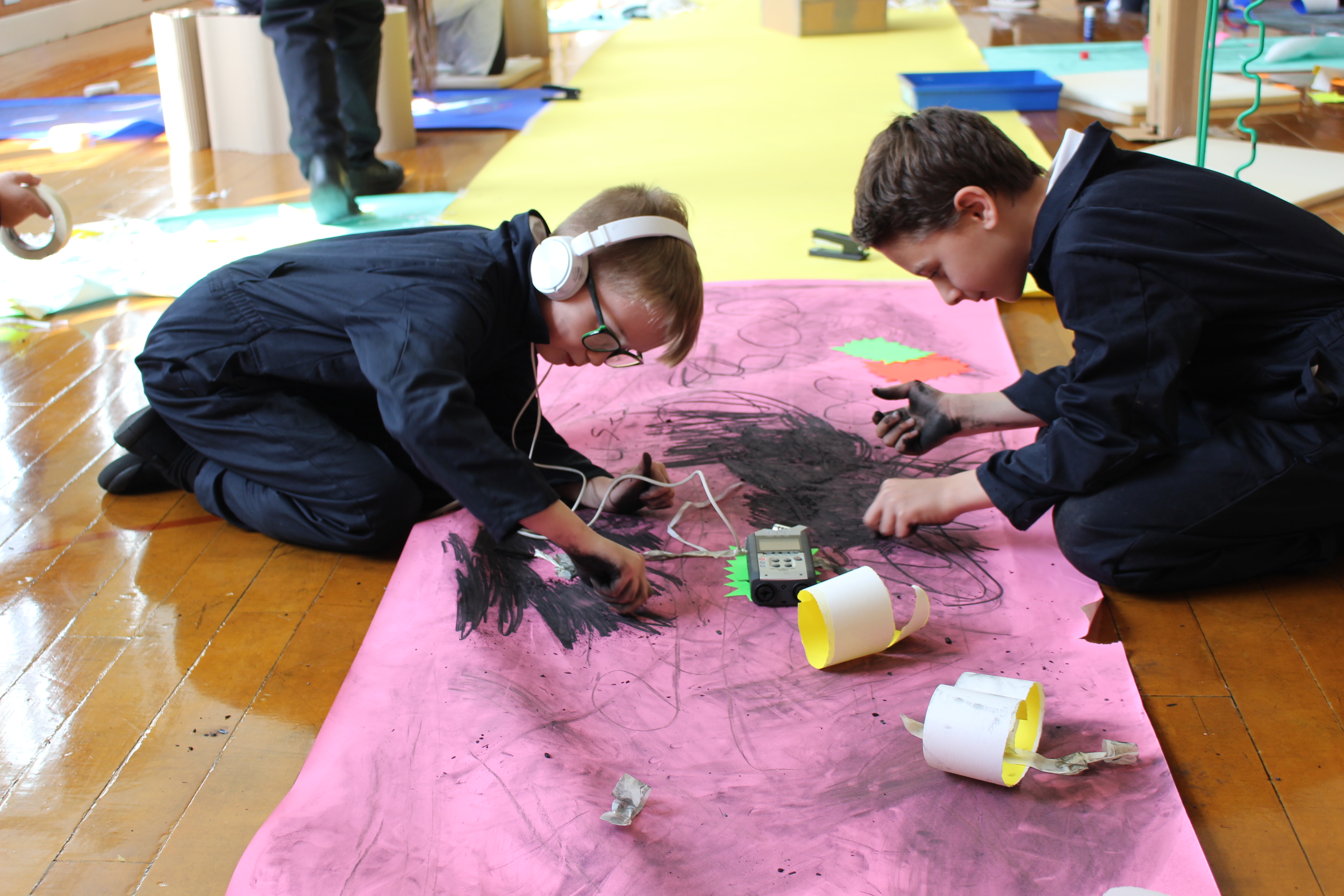 Sometimes this kind of open-ended materials investigation can be intimidating for groups that aren’t usually allowed the level of agency encouraged in this workshop- but Lumsden Primary were happily unbound in finding new routes and making processes, especially in relation to building and destroying work as it developed- creating dynamic and energetic forms and proving their creative resilience in doing so.

As is often in my workshops- I became quite deeply involved in the active flow of the afternoon and found myself needing a moment of calm and togetherness before the day ended, as well as wanting to return to the inward-facing group moments of earlier in the day. We sat in the centre of the room, surrounded by our drawings and creations and used clay as a tool for thinking through our hands and each other- using different parts of our bodies to think through making, both with eyes open and closed, or looking into each other’s.

There was a brilliant space opened up by the energy of the group that suddenly had to come to a close with home time, next thing, accept and build. I’m looking forward to being back in Lumsden for the SSW Lumsden Weekender, and thinking about the possibilities of working with these young people and others in the village as collaborators on work exploring play and what it looks like from different vantage points. I’m committed to exploring what adults often perceive as chaos in young people through play- I believe it’s a distilled way of making sense of the world.