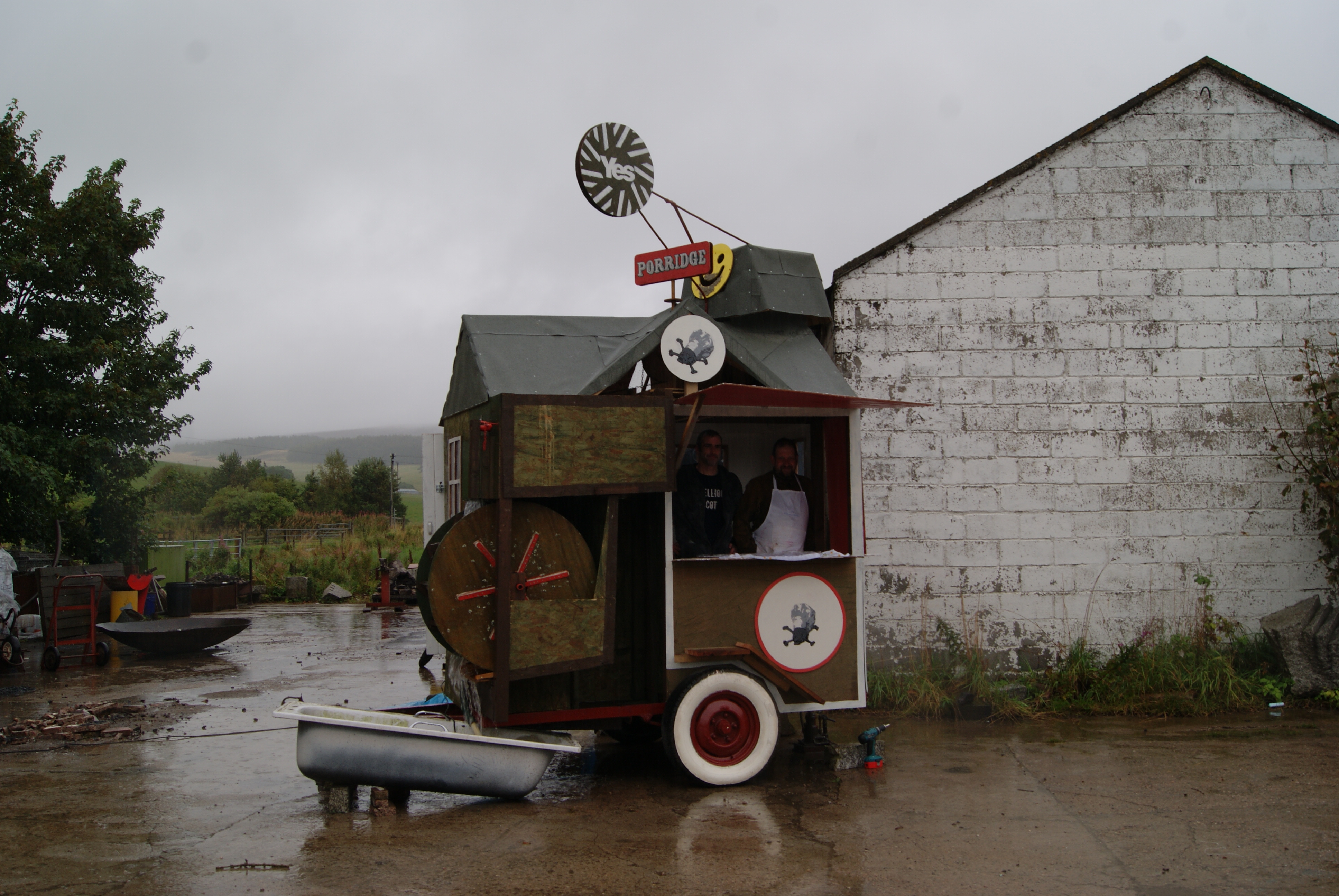 Stephen Brandes with Scottish Sculpture Workshop and Ritchie Duncan of Alford Oats
The Montgarrie Mobile Meal Mill and Porridge Bar is a collaboration between Ritchie Duncan, an artisanal oat miller employing methods and machinery dating back to the 1880’s and Stephen Brandes, a visual artist and founding member of The Domestic Godless, a collective from Cork, Ireland who seek to confound our everyday relationship to food with an irreverent attitude towards its presentation and consumption.

Oatmeal and porridge have an iconic status within the dietary landscape of the British Isles. Both nutritious and versatile it is synonymous with both healthiness and austerity. Colloquially, ‘porridge’ is another name for a prison.

Over two months, between Aberdeenshire and Cork, both artisan and artist developed their ideas which culminated in two-weeks of collaboration. The result was the creation of a mobile unit that presented a range of unconventional oatmeal inventions to the public. 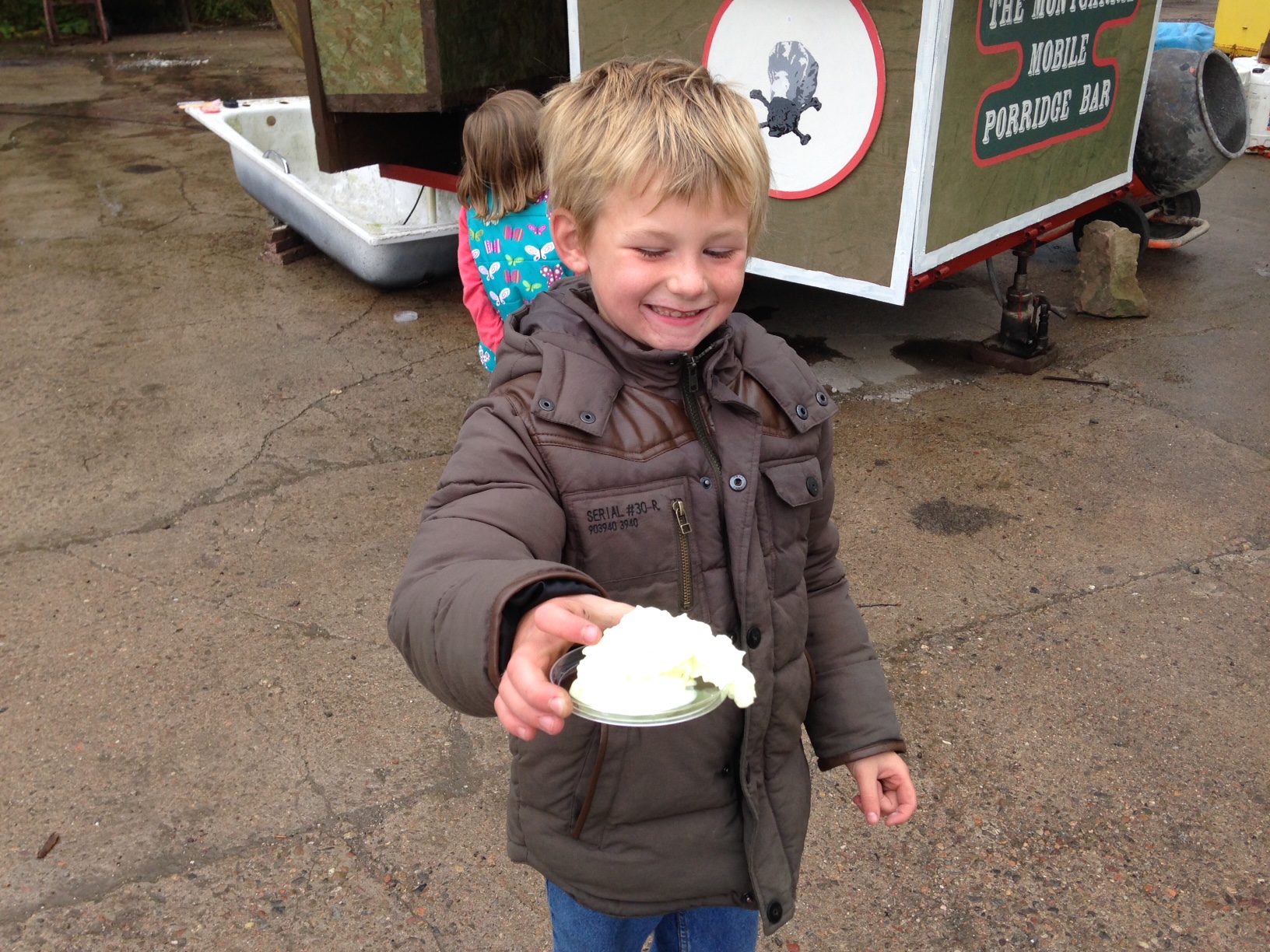 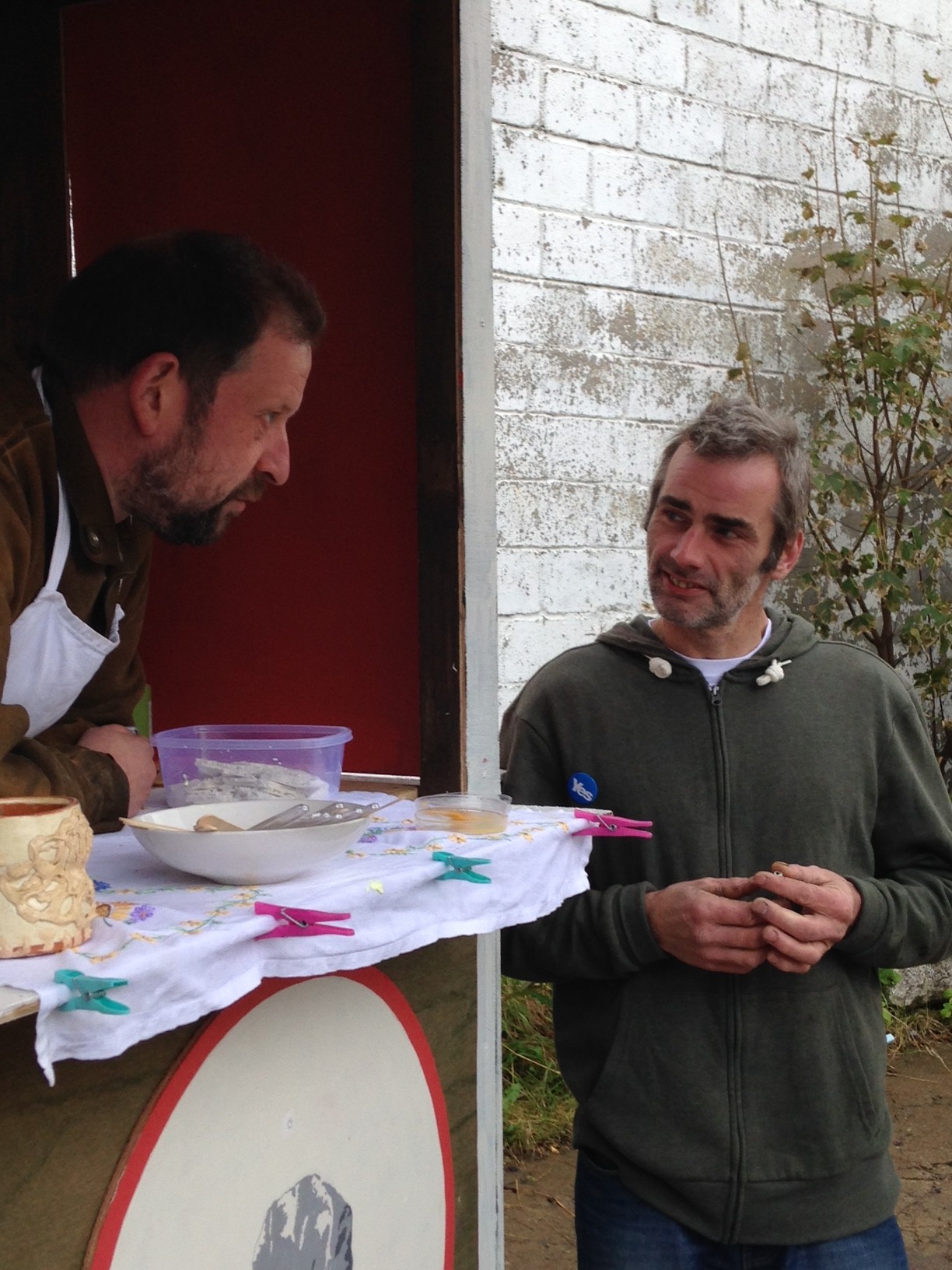 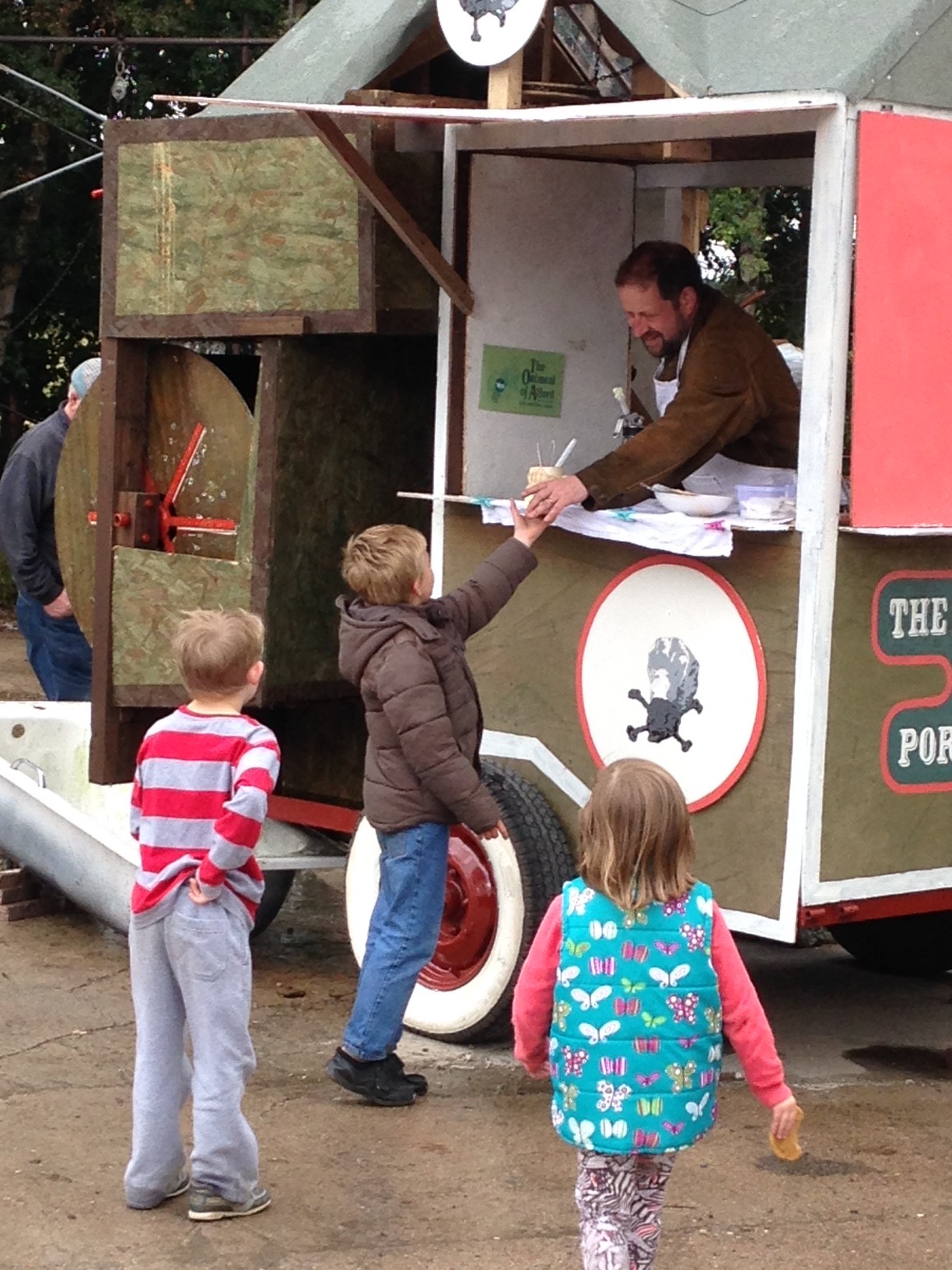 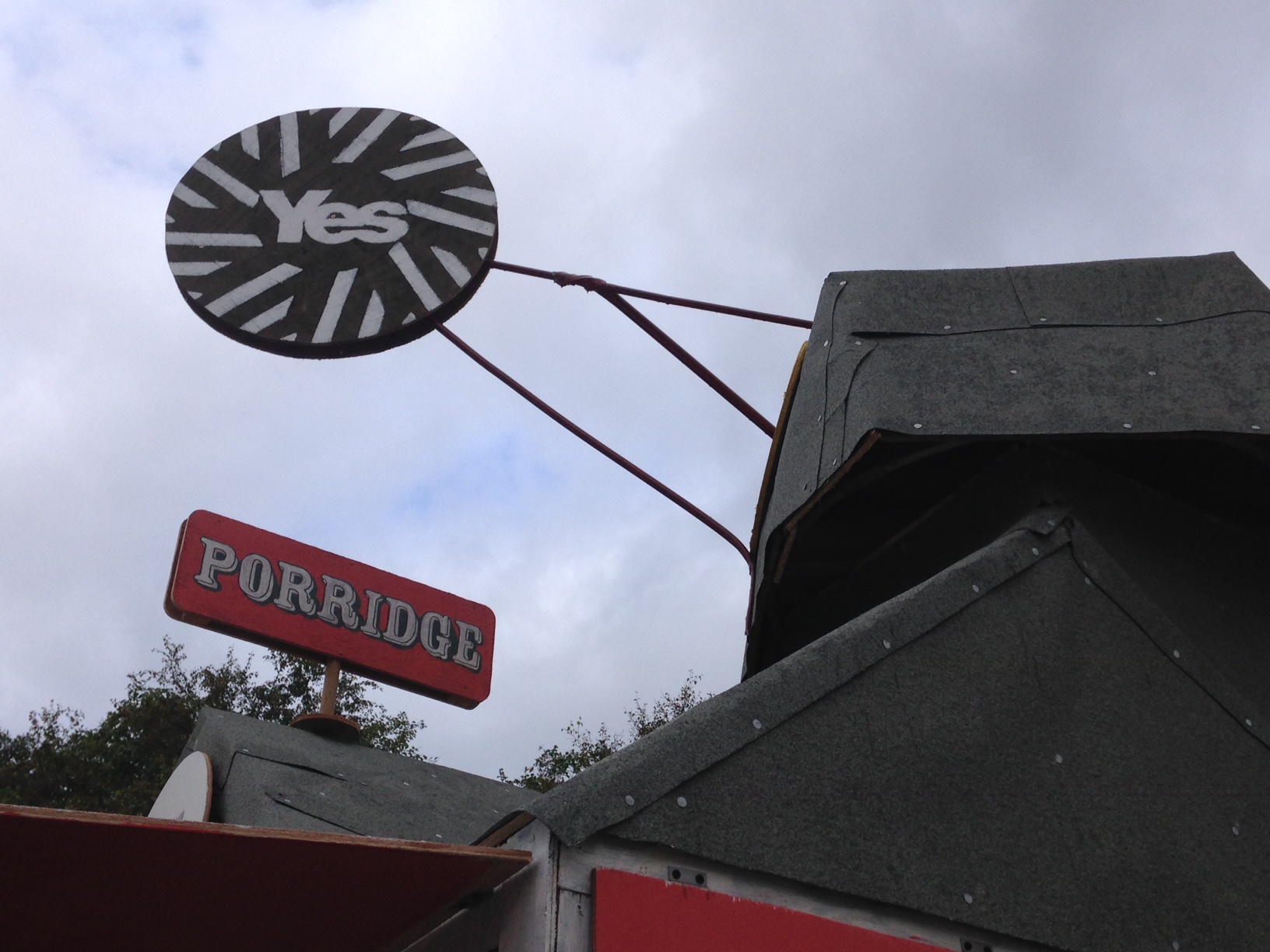 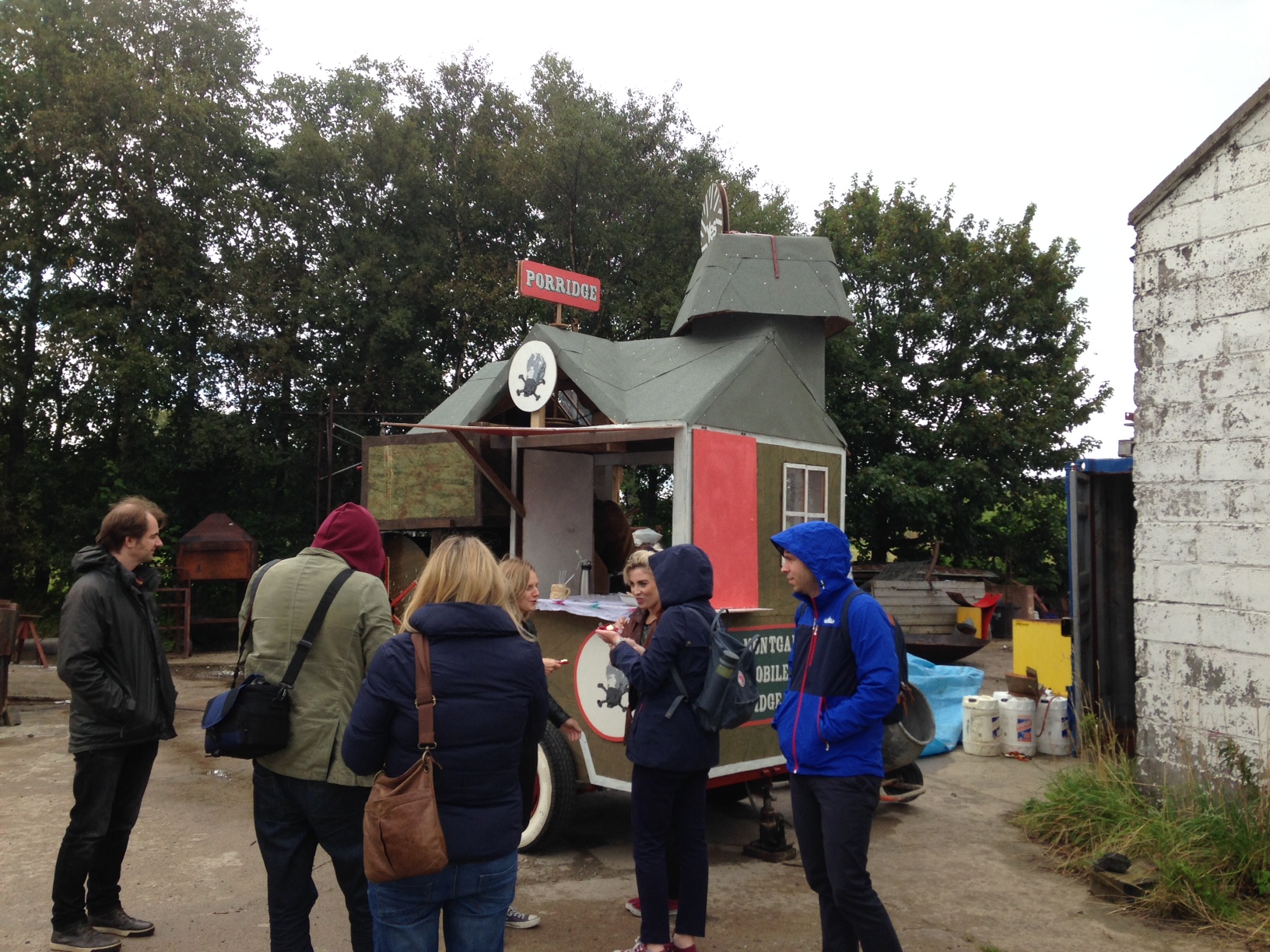 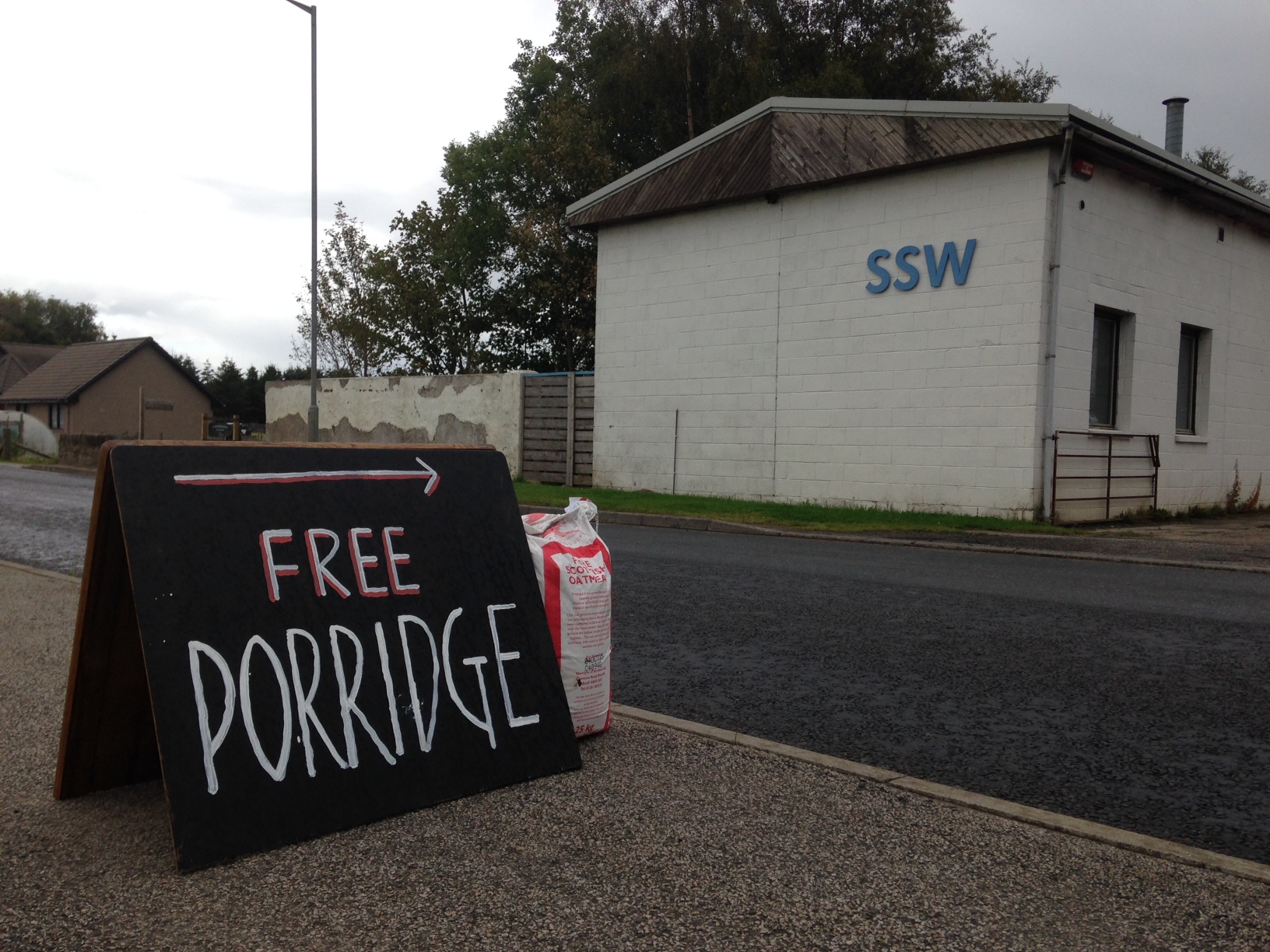 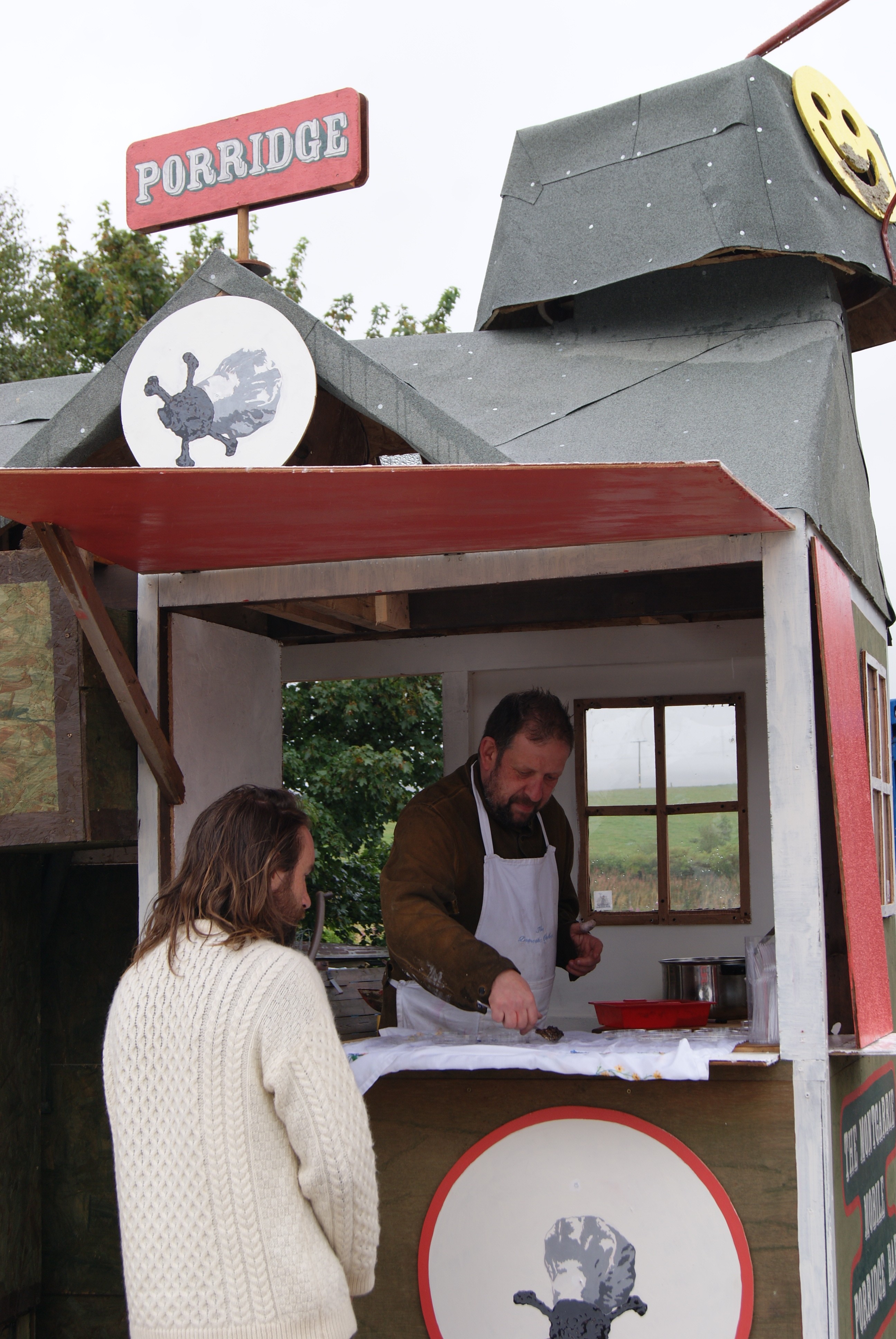 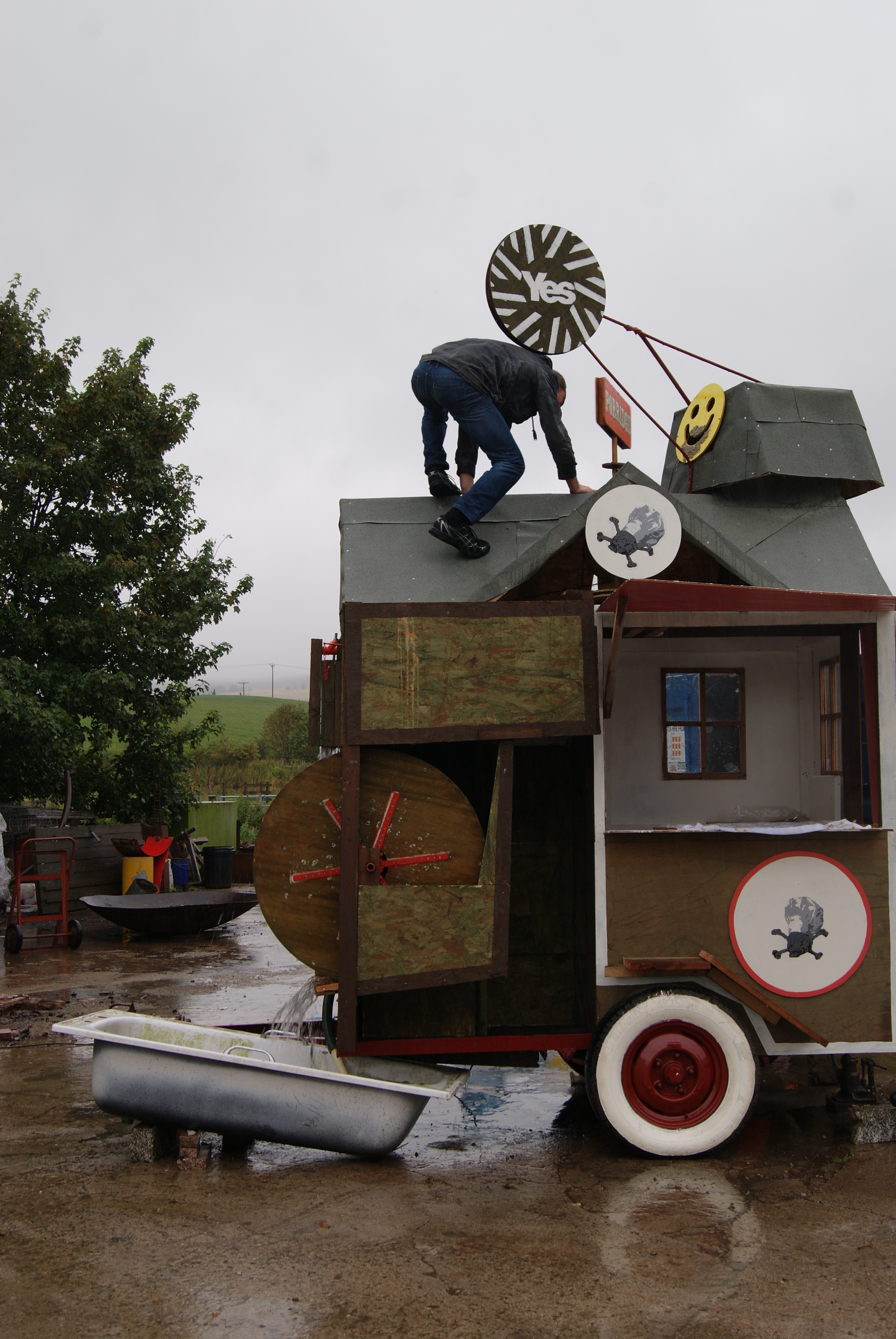 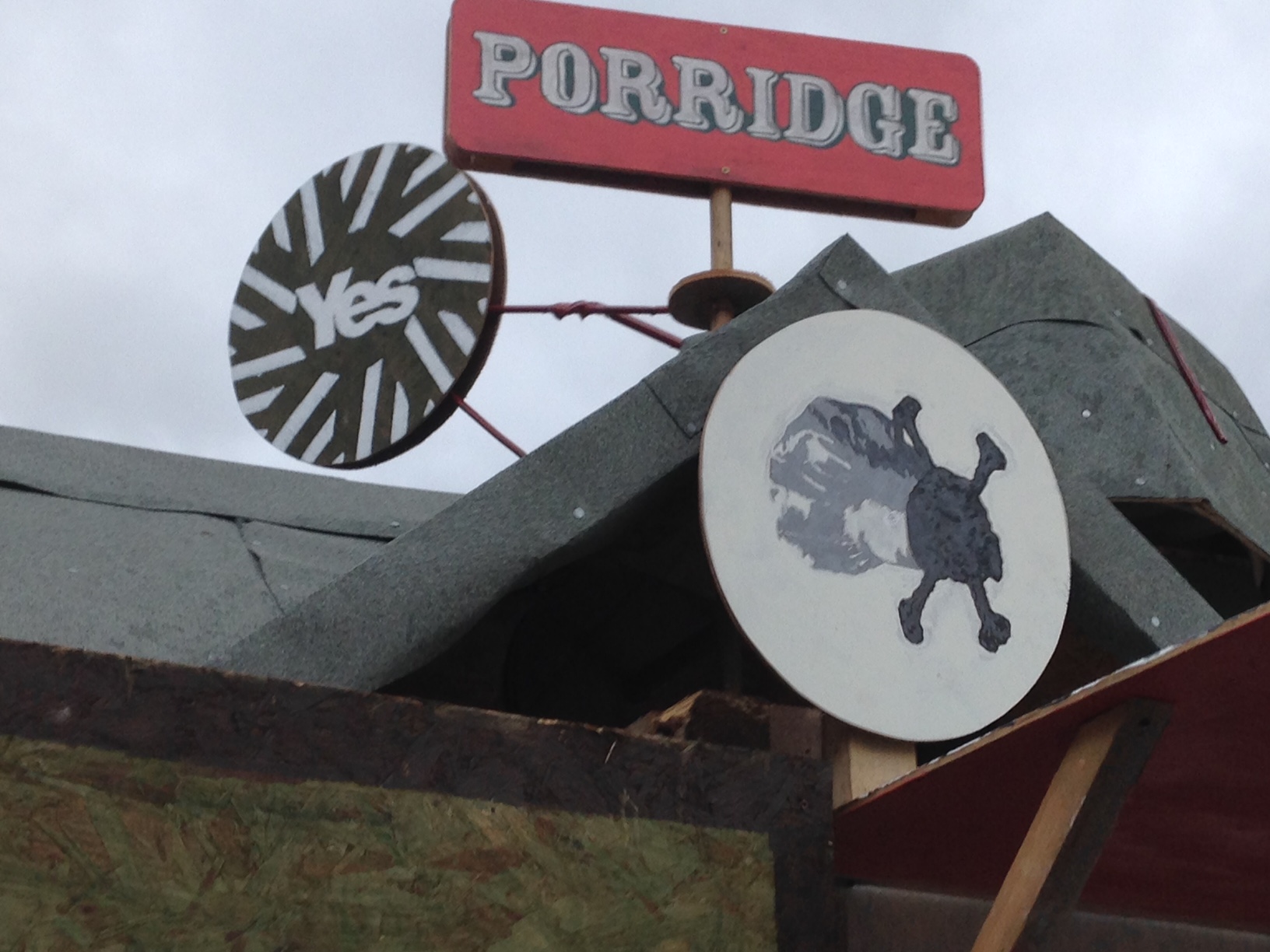 Description
Each organisation curated a Slow Prototype (SP) bringing together internationally renowned contemporary artists with crafts/trades people in residencies of up to 4 weeks in August / September 2014. Each SP was about different sets of skills coming together on equal terms and mutually affecting each other, generating something unexpected, unfolding through each collaboration.

The North East of Scotland has a reputation as Scotland’s larder (fishing, Aberdeen Angus, traditional products such as shortbread and whisky…) but there is not a reputation for eating well in the North East. The five invited artists spent time engaging with local food organisations and the local community. The creativity of artists and their curiosity questioned the paradox of a less than ideal diet in a place of amazing produce.

A broad view was taken of food production and consumption: ranging from artisanal food, to leftovers and food banks; surplus as well as scarcity was considered. We looked both at Aberdeen’s inner city (where there are large areas of deprivation) and at rural Aberdeenshire, traditionally a farming community. We wanted to know the reality of food production and consumption in these places and engage in conversation with the public at large.

The project culminated in the form of a 2-day Skills Biennale on the 6th and 7th September 2014. A one-day bus tour was organised around the five projects, allowing audiences to see all five Slow Prototypes. The results (performances and exhibitions) showed the breadth and quality of work created in Aberdeenshire.