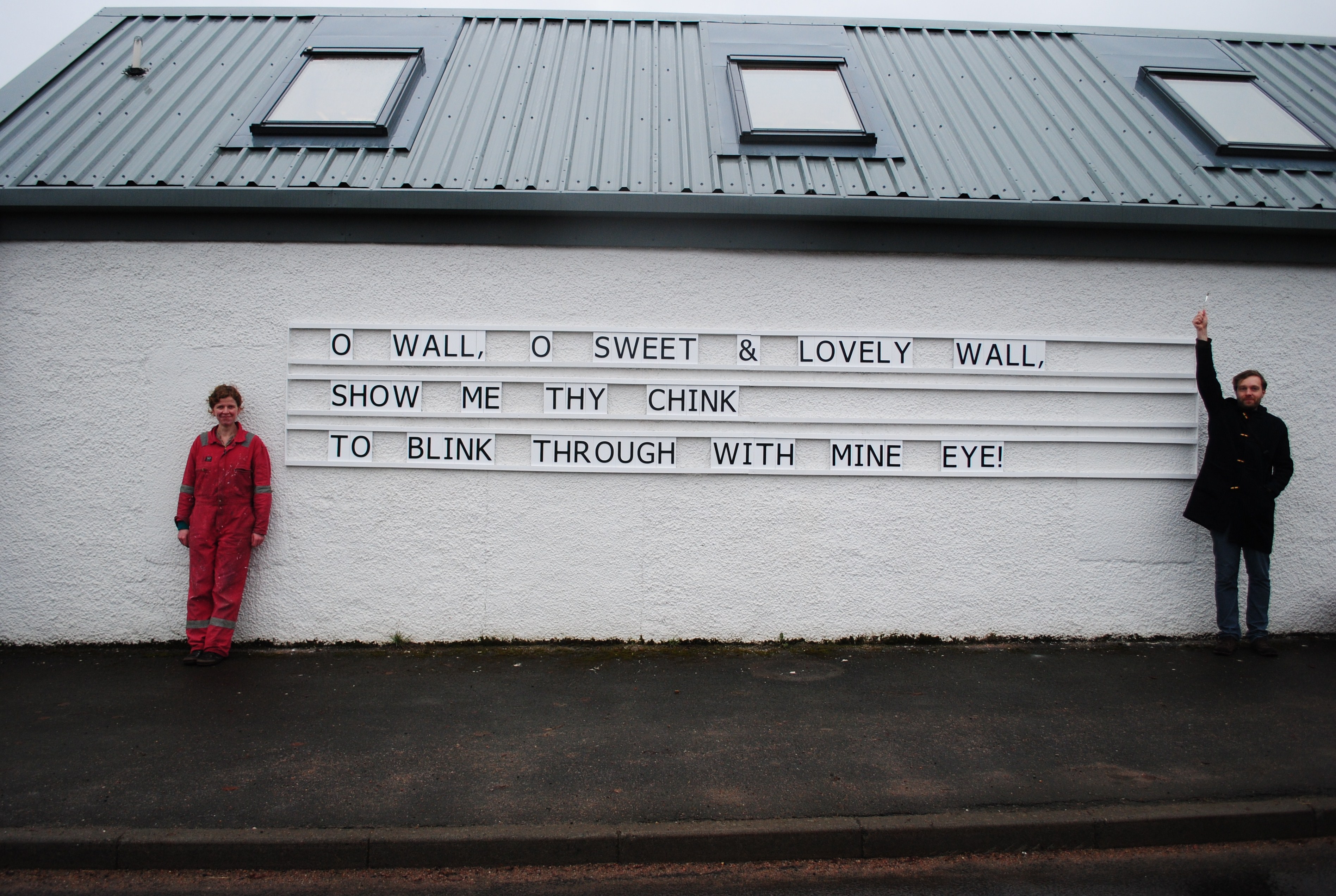 Artists Jonathan Baxter and Sarah Gittins were invited to explore ‘sustainability’ as part of our Communities and Cultures programme in 2012. ‘When the Future Was Now’ responded to this invitation by focusing on food sustainability as a critical issue for SSW as an organisation, and Lumsden as a village.

Artists
Jonathan Baxter works across art and non-art disciplines using psychoanalytic methodologies and performative practices to variously open up, challenge and propose what is. Sarah Gittins is a visual artist with a particular focus on drawing and printmaking. Sarah’s images create a space to reflect on everyday life and global ecological concerns.

Outcomes
This project remains unrealised. However interim outcomes include The Talking Wall, the Maintenance and Care signage and Sustainability Vision Statement proposal. This has also emphasised to the organisation the realities of what can be done, should be done, and in terms of SSW’s capacity of staff and resources, what is sustainable.

The Talking Wall has been hugely successful. Originally an interim outcome, this has had a lasting impact on SSW, interaction with the wider community, and has been a positive step forward in increasing dialogue with the village. Whilst part of SSW will always remain insular and transient, the three and a half decades the organisation has been in the village has seen it become part of the fabric. 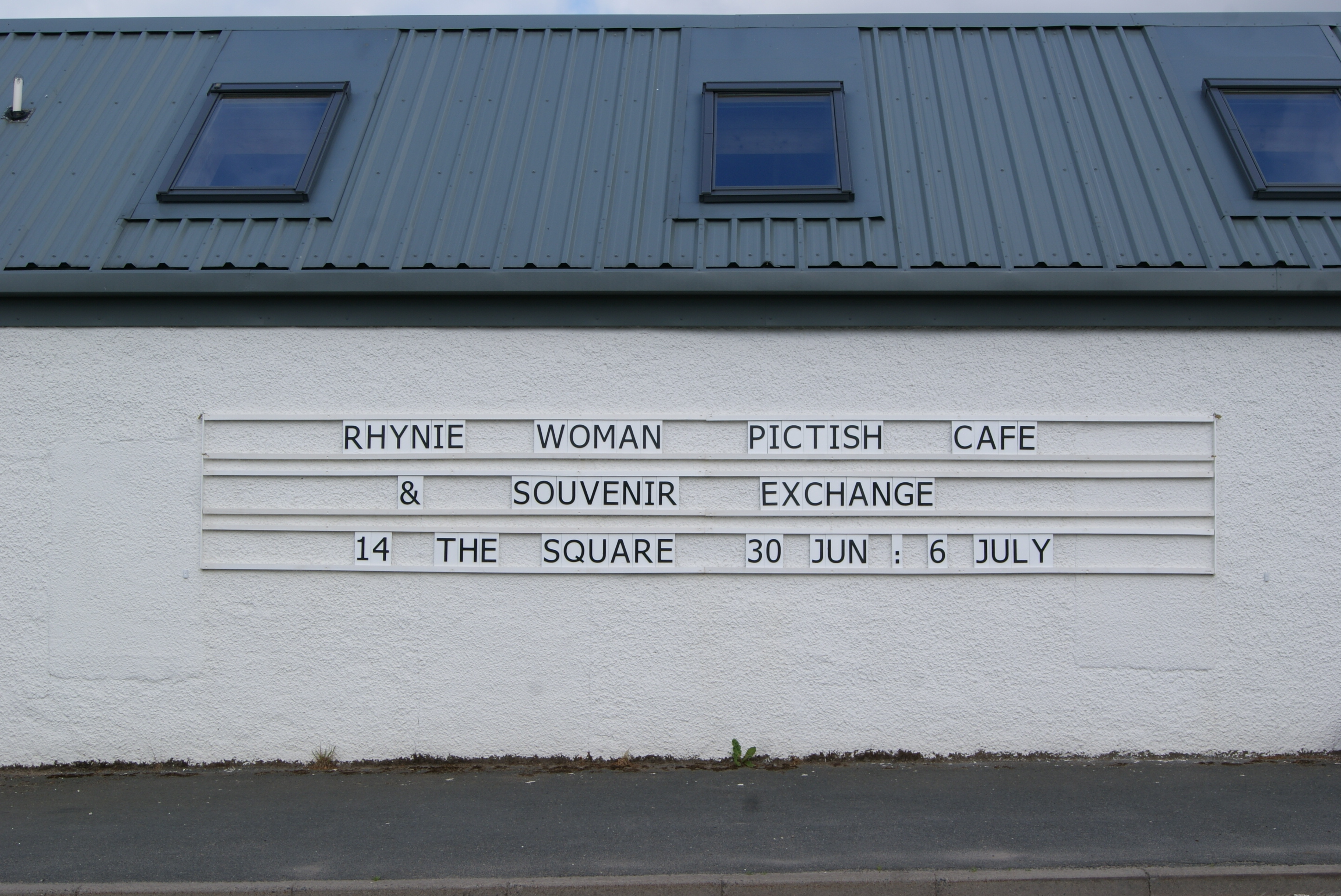 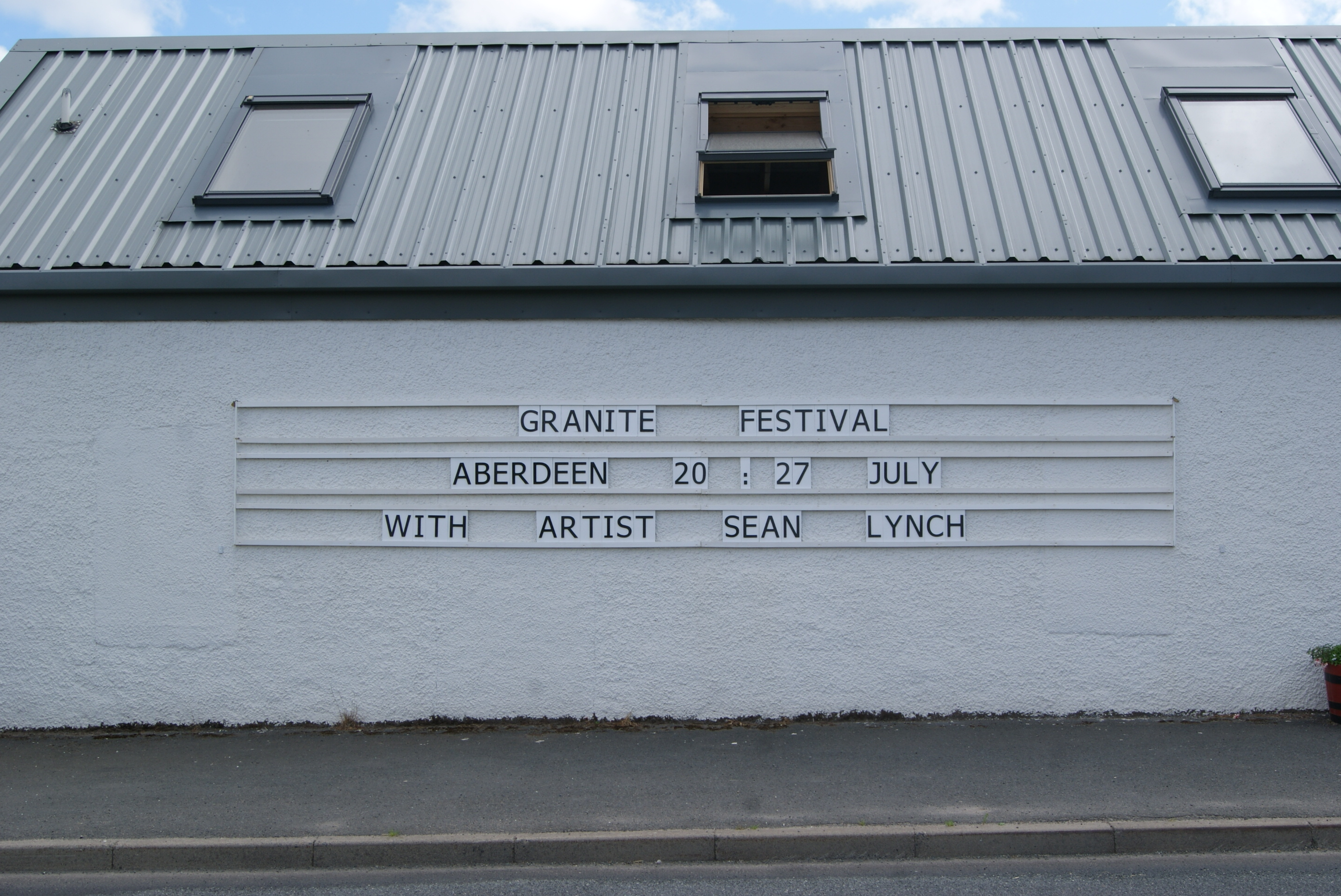 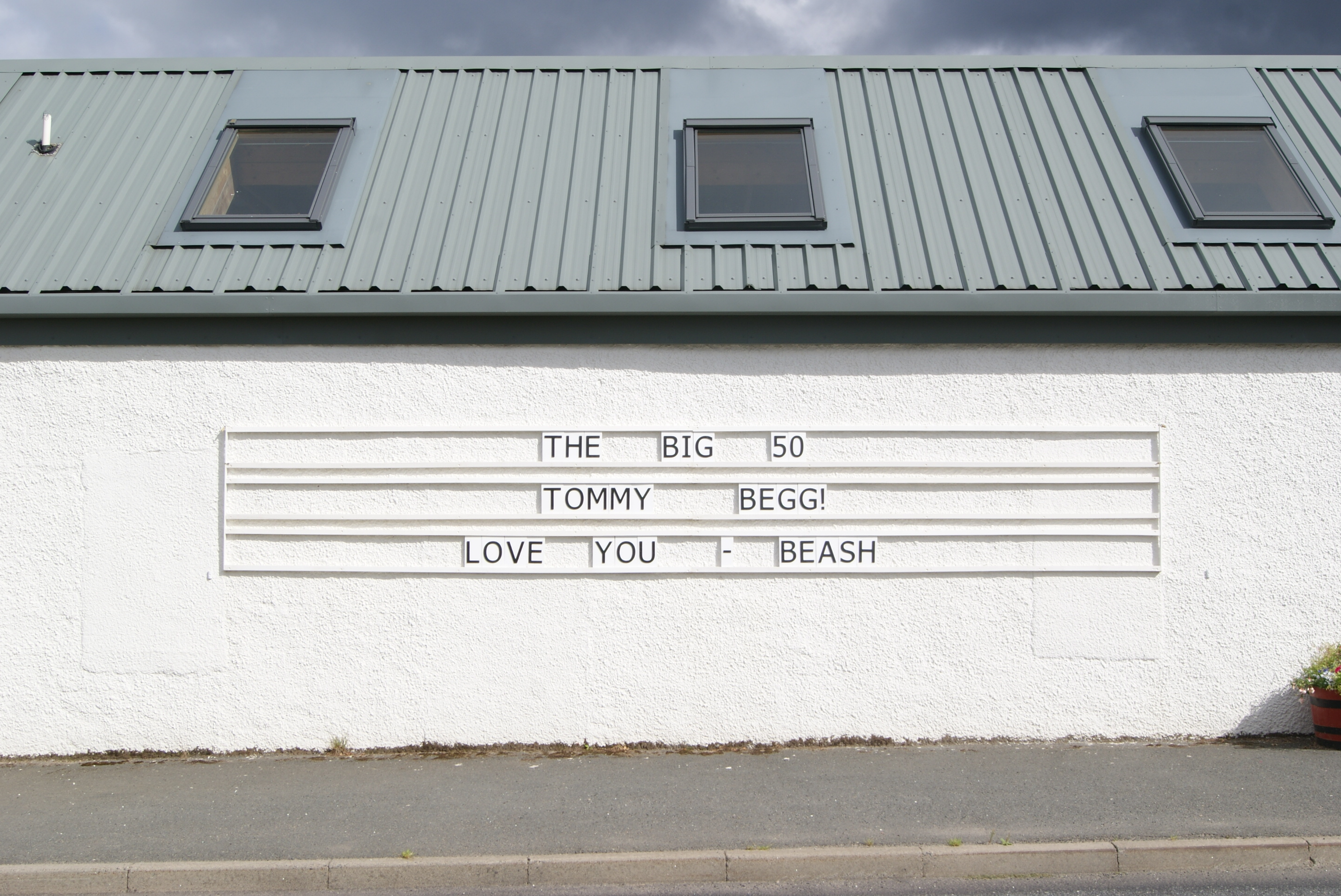 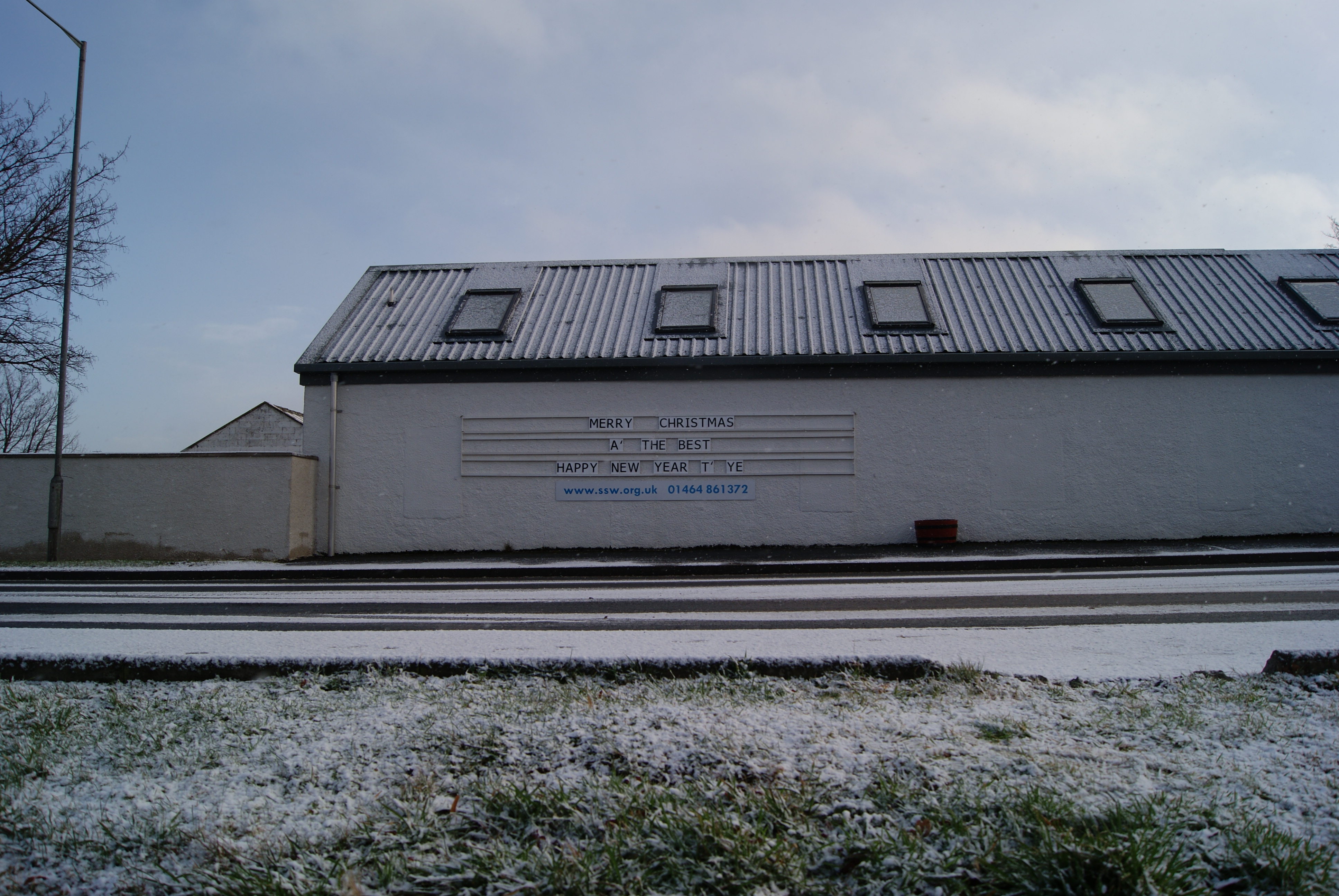 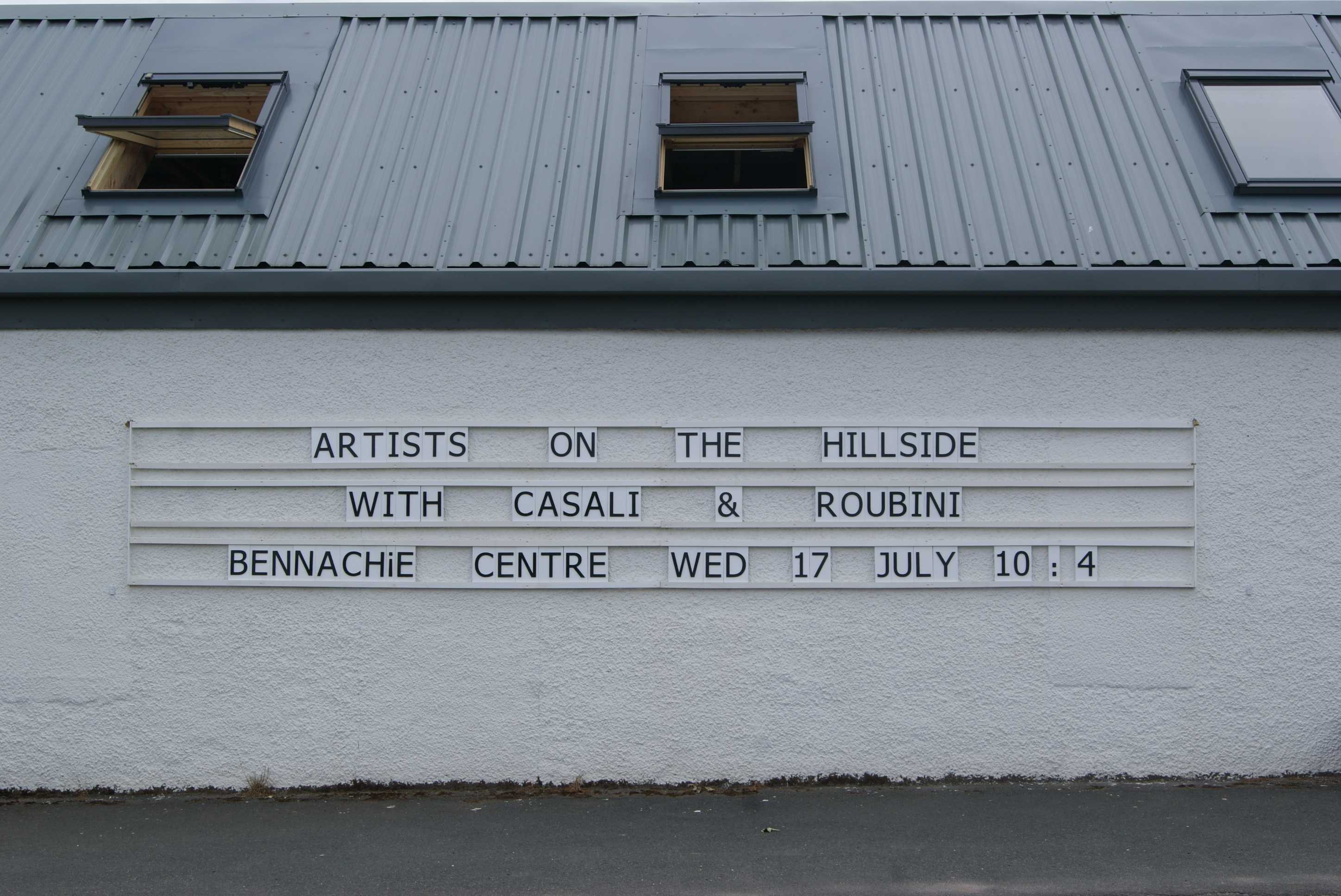 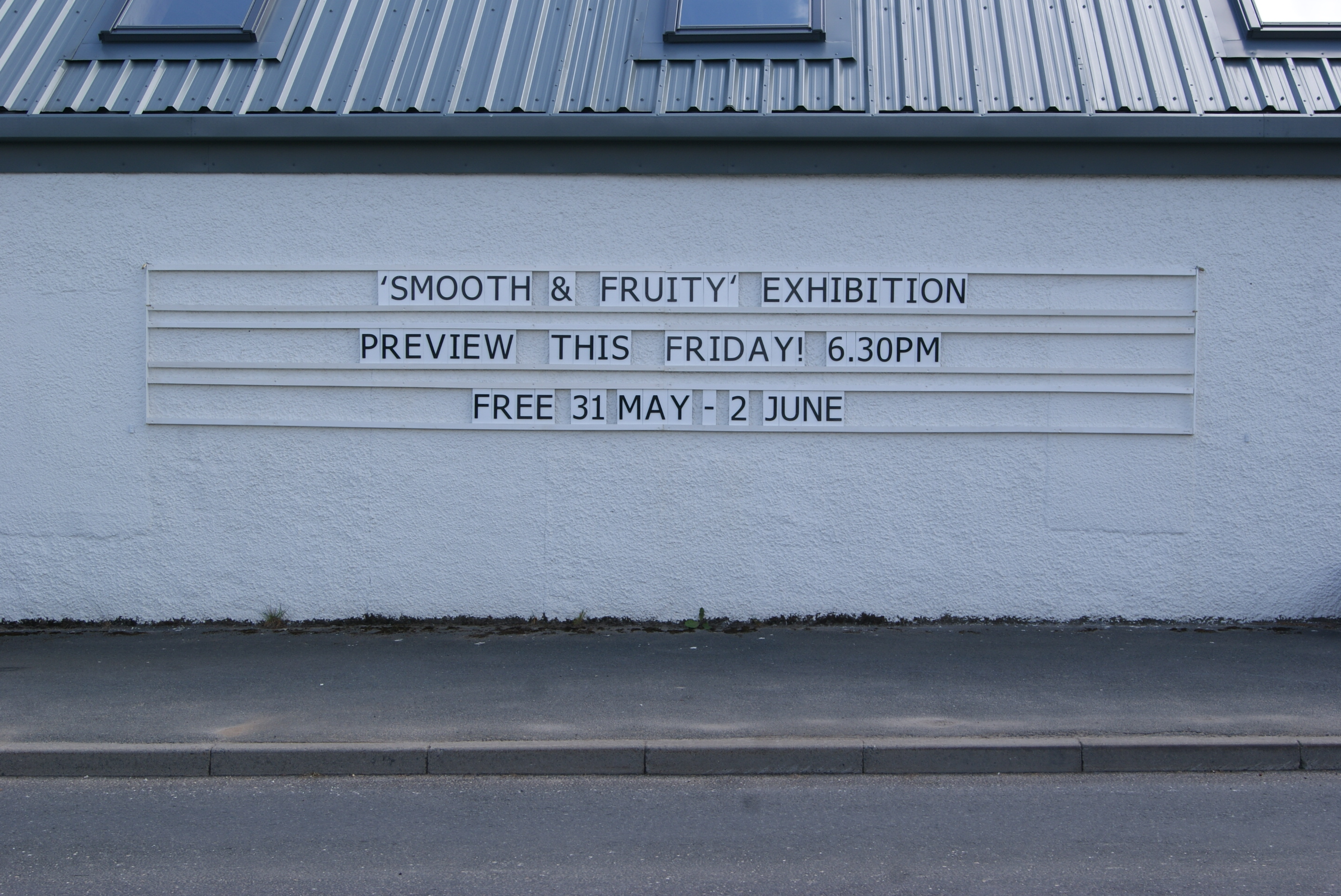 Funders
With Thanks to Marr Area Partnership Initiative Grant Scheme

Request a message on SSW Talking Wall
Please email yvonne[at]ssw.org.uk, if you have a message or event you would like to share.

Methodology
When the Future Was Now used a three-fold methodology first developed by Jonathan in 2009 and used in a variety of A+E projects ever since. This can be described as ‘getting to know you’, ‘knowing what we know’ and ‘failing to forget.’

The first phase of the project involved an open enquiry concerning people and place – including a visual mapping of SSW and Lumsden, meetings with SSW staff and residents, conversations with the wider Lumsden community, a questionnaire exploring food sustainability in Lumsden, and two participatory art workshops exploring our relationship to food and how it shapes our lives. The primary outcome of the first phase of enquiry was an interactive sculpture – otherwise known as ‘The Talking Wall.’ This was installed on SSW’s outer wall to facilitate mutual communication between SSW as an organisation and Lumsden as a village. It also allowed for more personal and poetic forms of public communication within Lumsden.

The second phase of the project involved an hospitable-critical conversation with SSW staff and visiting artists regarding their carbon (and more broadly their environmental) footprint. Having spent time at SSW in a residential capacity and having got to know more about SSW’s history, it’s funding structure and shifting organisational priorities, attention was directed to the pragmatics of developing some Maintenance and Care signage for the day to day running of SSW as a facility. To this end, signage was developed based upon an imaginative dialogue between Samuel Beckett (arch-modernist) and Mierle Laderman Ukeles (maintenance and care artist). The signs raised awareness of sustainability issues relating to composting, recycling, water usage, energy consumption, and travel.

In addition to the Maintenance and Care signage, a draft document entitled ‘Sustaining the Vision: Communities and Cultures at SSW, Lumden’ was written. This document proposed ways for SSW to embed environmentally sustainable practices within its ongoing programme and organisational structure. The document included a draft ‘Sustainability Vision Statement’ for SSW – as an interim measure towards developing a Sustainability Policy – and a proposal for developing a Maintenance and Care role for an SSW member of staff or intern.

The third phase of the project remains unrealised – this, in part, due to a funding shortfall. In April 2014 Jonathan and Sarah visited SSW to discuss this failure and draw a line under the project. The unrealised outcomes were due to include raised beds and window boxes (at key sites within SSW and Lumsden), film and food nights (to raise awareness of food sovereignty and land rights in Scotland), the development of a Maintenance and Care team within SSW and Lumsden (in part to tend the raised beds and window boxes), a trial run of the Lumsden ethical food larder (to be hosted at SSW), wild planting and foraging signs in the Sculpture Trail and along the core paths, and an arts education event exploring social sculpture and environmental sustainability (to be run as a summer school in 2015).

In the spirit of hospitable-criticality Jonathan and Sarah take issue with the failure to realise When the Future Was Now. They have reflected on their practice, their organisational affiliations and the role that funding plays in determining or undermining long-term sustainable commitments. On a more positive note they hope that the poet and historian Dolores Hayden might yet be right ‘failure … is attributable only to the most imaginative experiments, and I am willing to define as a success any group whose practices remain provocative even after the group itself has disbanded.’

So the question remains: where in SSW’s ongoing programme can we see the signs of life for a more sustainable food ecology within SSW and Lumsden? And in what way will this conversation be taken forward by SSW staff and visiting artists now that When the Future Was Now has, well … failed to arrive.