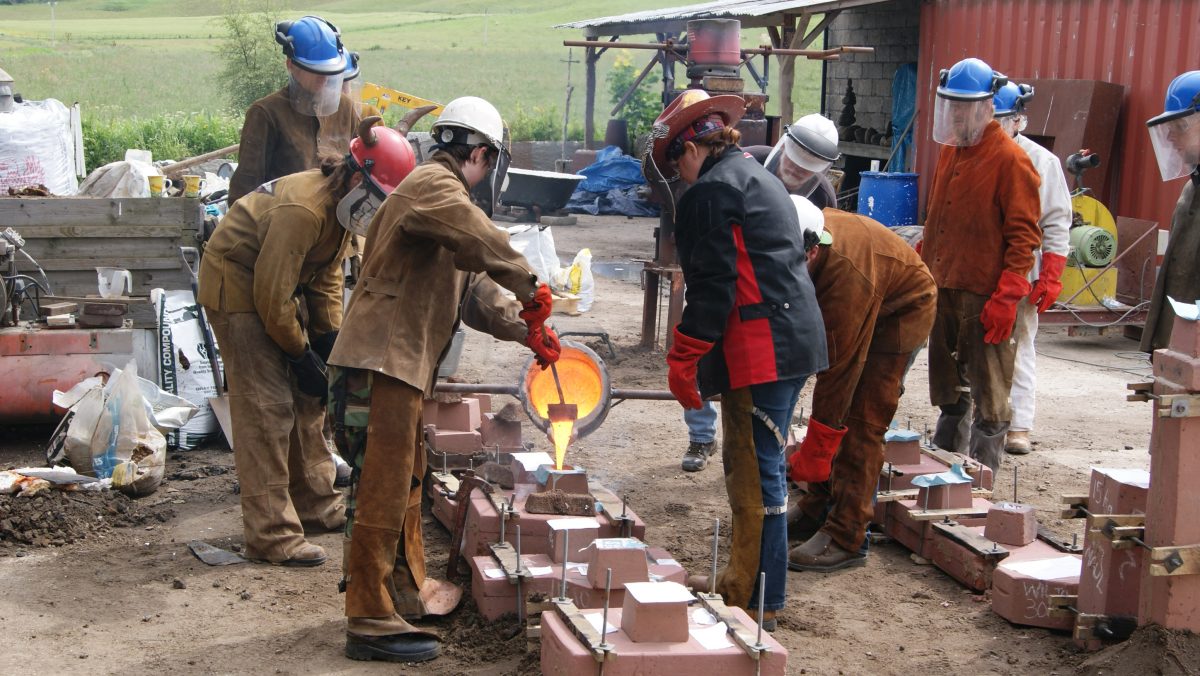 The first iron pour of the UK leg of USUK Cast Iron Symposium has come and gone in a flash it seems, and an impressive amount of work has come about on behalf of the international artists here at SSW for the symposium.

In total, the artists got through 2100lbs of iron with the help of the SSW technicians Eden Jolly and Virginia Hutchison, and a few local artists who were on site to lend a hand, including SSW patron and casting expert George Beasley, who packs a lifetime of experience in iron pouring.

The days leading up to the pour were spent breaking iron, prepping the furnace and finishing moulds. On the day, the artists worked as a focused team, taking it in turns to charge the furnace and pour each mould in unison. The event was engrossing to take in as a bystander; the general atmosphere buzzed with the primordial energy of an act that has been passed down through the ages, outdating most artistic practices.

We have seen a great variety of work produced by those involved in USUK this year. Swiss artist Susanne Roewer took on the challenge of creating a 450lb bell form, which will be great to see once it has fully emerged from the sand mould it was cast in.

Ben Woodeson put together a complex cast of interwoven polystyrene tubing, which once it is free of the cast will have the appearance of being suspended in the moment before falling.

A few artists explored more experimental techniques, including Jeff Crawford who cast into carved stone. Kelly Ludeking managed to steel the show when casting into the whiskey barrel donated by Glenfiddich. His technique has an extremely technical term of ‘rolly-moulds’, in which the metal is poured into found objects packed in sand then gyrated in the moulds until the iron coats the inner surface of the object. This often leaves fragmented pieces of the original as well as intricated textures from both the object and the movement of the molten metal. For this particular pour he used site specific and locally sourced materials – including the whisky barrel. The pour released smoky aromas from the barrel and created a magnificent concave sheet of iron – a plane of voids and negative spaces – which will now be housed on site at the workshops.

Kelly Wilton created similarly intricate pieces casting around the bone of a cattle jaw that she found in fields nearby SSW, creating a fusion of industrial and natural materials. For the next pour she will go on to cast organic moss formations, using expanding foam to cast the fragile pieces.

Geoff Hockley cast the main parts of a mechanism he has been working on for some time. These parts will be used as the inner components of a piece intended to pose as a historical relic that merges areas of alchemy and science. Kevin Dart poured a series of small-scale moulds which will come together to create a mass of interchangeable building blocks in the form of a face, which viewers will be encouraged to interact with and distort in any way they wish.

Keep your eyes peeled for images of the work once it has been completed and for the next round of casts to be poured this coming Friday at the SSW Open Door Summer Celebration!