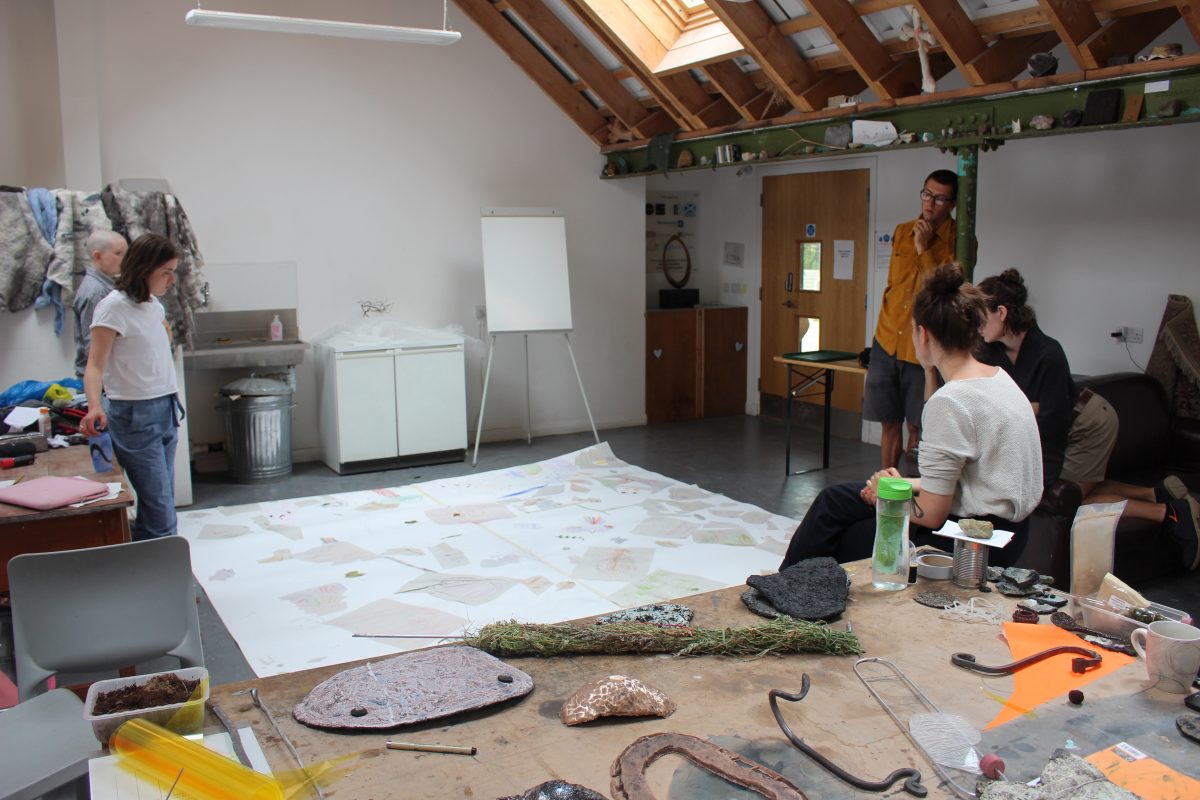 How one orientates themselves amongst their environment is made up of lots of vital knowledges, ones that must allow multiple contexts to be considered collectively and at the same time. I was interested when coming to spend time in Lumsden to consider how one begins to learn and orientate themselves in light of all these on-going stories and knowledge bases that exist around the village and all of its inhabitants.
The notion of gathering has been on my mind for some time and I have been interested in using it as methodology that informs my artistic practice. An important aspect within this is repetition and re-discovery. Looking (again) or touching (again) or being (again) with something you believe to be familiar. Nothing stays still, everything is wiggling and always on the move. To begin to gain an understanding in this form of worlding and ecological discourse at a young age I believe is especially important. 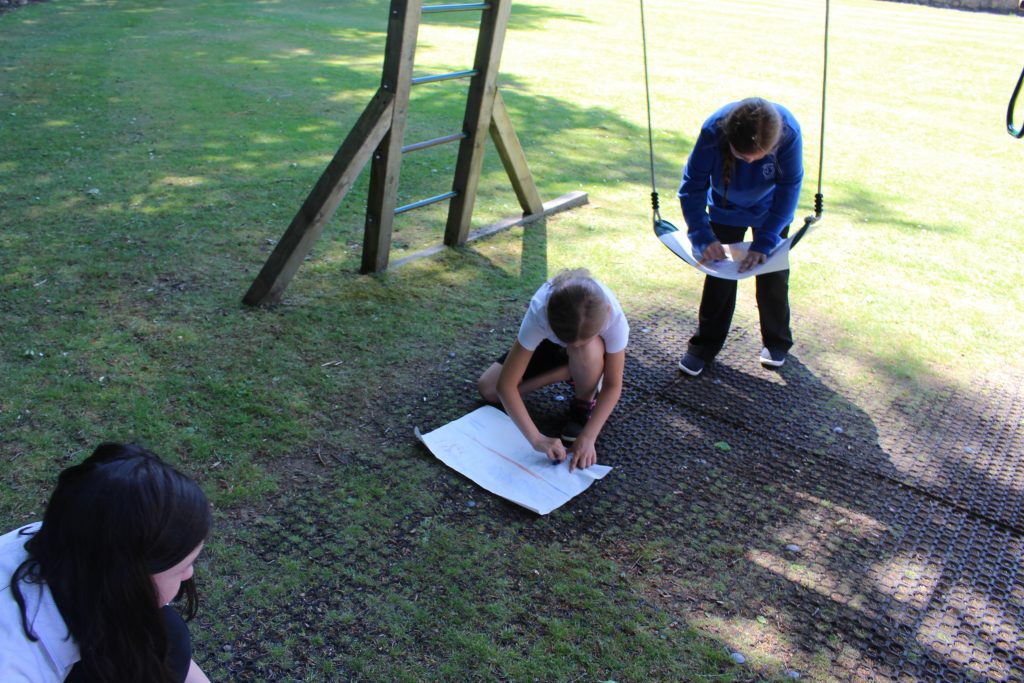 For the Students at Lumsden Primary School and our workshop, I thought it would be interesting to re-discover a space they must know very well. The location was one that embodies a freedom, with associations with play and rest – the Playground. We were to explore aspects of mapping processes and re-think how we can learn, and re-learn and then condense all this information, to acquire not just a material product but also a new attitude to thinking about how we know, learn and live with places.

We would create a form of alternative map that accommodated for multiple perspectives, timeframes, inhabitants, boundaries and knowledge bases.

At first we immediately chatted around cartography- what is a map? what do (traditional) maps tell us? and how do they tell us these things? – They allow us to locate ourselves, and whats around us. Where we are in relation to home, to significant markers on the land and within the social sphere.

But all of this uses largely visual clues and visual methods of reading. What about types of texture, or material and memory and interpretation? 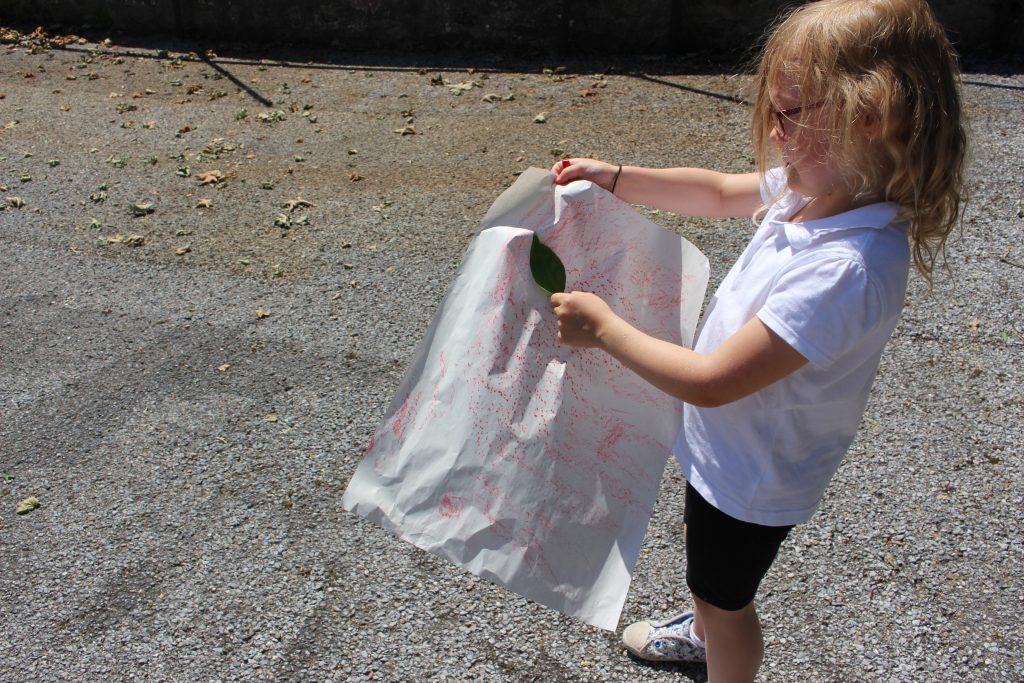 Together we were ‘Togather’-  and create a new form of map or drawing that allowed us all to explore, play and collate. We used simple methods – Frottage (the process of taking rubbings from material) – to find as many different textures within the locale as possible. These were to include non-human and human derived textures ranging from grass, leaves, bark, to elements of the climbing frames, concrete, cast metals, fencing, hands. As well as you think you might know what material textures exist, where and how they feel, this is often proved wrong, and when on a blank page of paper there suddenly appears intricate patterns and weavings from the material which lies beneath, a joy and magic abounds. 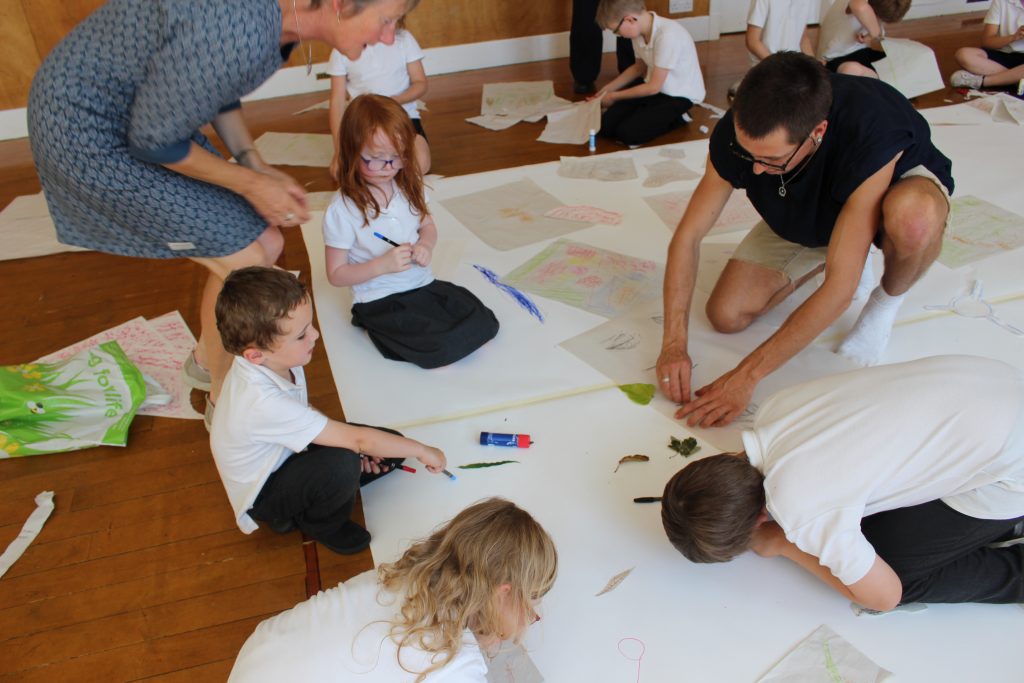 There is also a joy in exploration, and being consumed in the act of multi-sensory gathering and stimulation. A significant part of the exercise involved feeling materials between hands, how rough and striated wood sits alongside metallic and industrially formed bolts. About pursuing an attention to how things are constructed, and how they exist at that moment in time, and how they sit amongst everything else. This was not about delineating human or non human creations, but instead compiling them altogether.

Within our gathering also lay the opportunity to experiment with how we all arranged or separated, or overlaid our findings. We layered rubbing over rubbing to create dense pockets of texture, multiple traces of information and times, intermingling and creating new patterns.

We then collated all this information. Sifting through all the material we had acquired we were going to use it to respond to the specific locale and create a large collective drawing, an alternative map, or web or puzzle. This bringing together of multiple experiences creates a highly subjective account. There was no North, South, East or West prescribed and instead one’s guidance through this puzzle or map depends upon alternative logics that seem less to do with prescribed data hierarchies; more to do with interdependency. 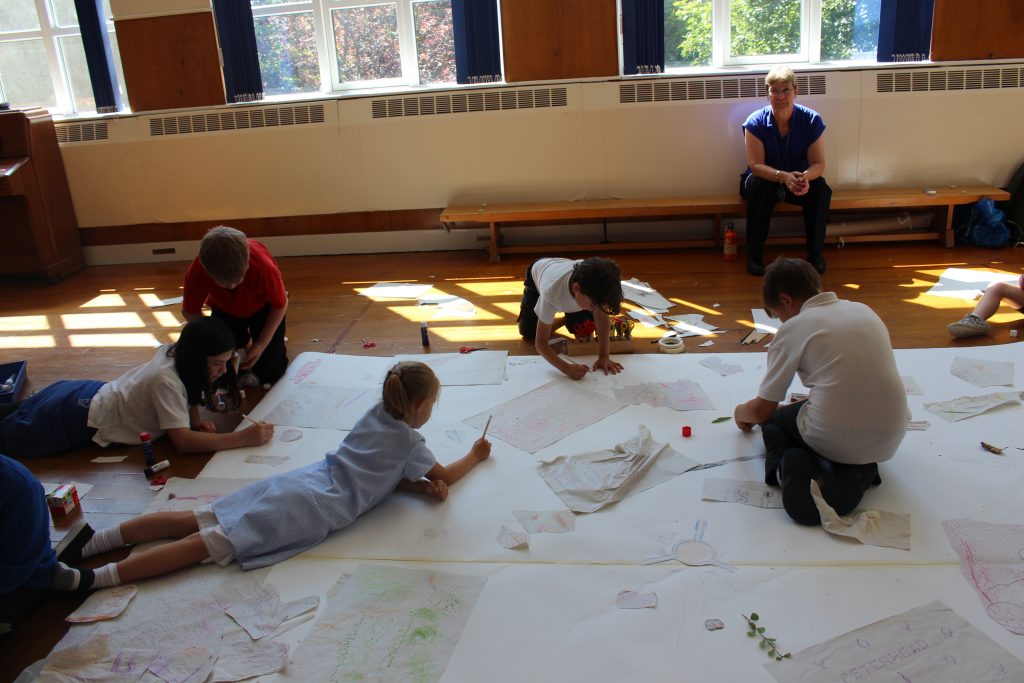 Interpreting it is an encounter involving a stratified collation of texture, shadow, clarity and abstraction. Rubbings but up against each other or overlap. Some students used drawing amongst and on top of their rubbings to depict other inhabitants of the playground, butterfly and bird and insect species as its also necessary to understand that a lot of other forms depend also upon the playground. Visual depictions of features of the playground also found their way into the drawing (the climbing frame, the road, trees). 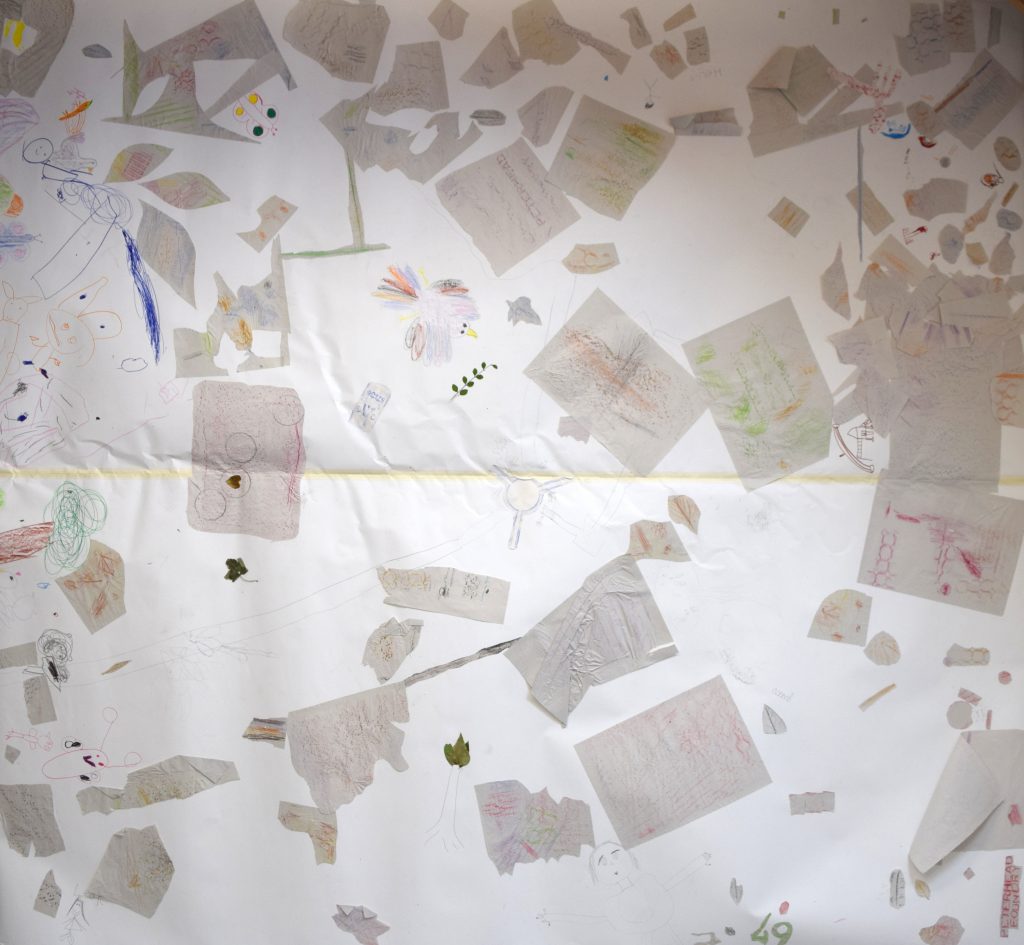 When reflecting upon how our drawing appeared it was clear we had created something complex. We began to think of it as a puzzle, ‘a birds eye view of a dream’ as one student reflected, a warren holding pockets of information, or diverse experiences and relationships to an already well learned place. The word mess(y) cropped up a few times. The drawing is chaotic, information blends and folds over itself – this is very telling of how all of this (and the process of making it) exists in actuality. Places are, and how we come to know and learn them is, an inherently messy process. No good is it to believe rigid and unwavering delineations will provide the appropriate tool set, but instead we should gather skills that unpick and blend and care with the needs that surround us. 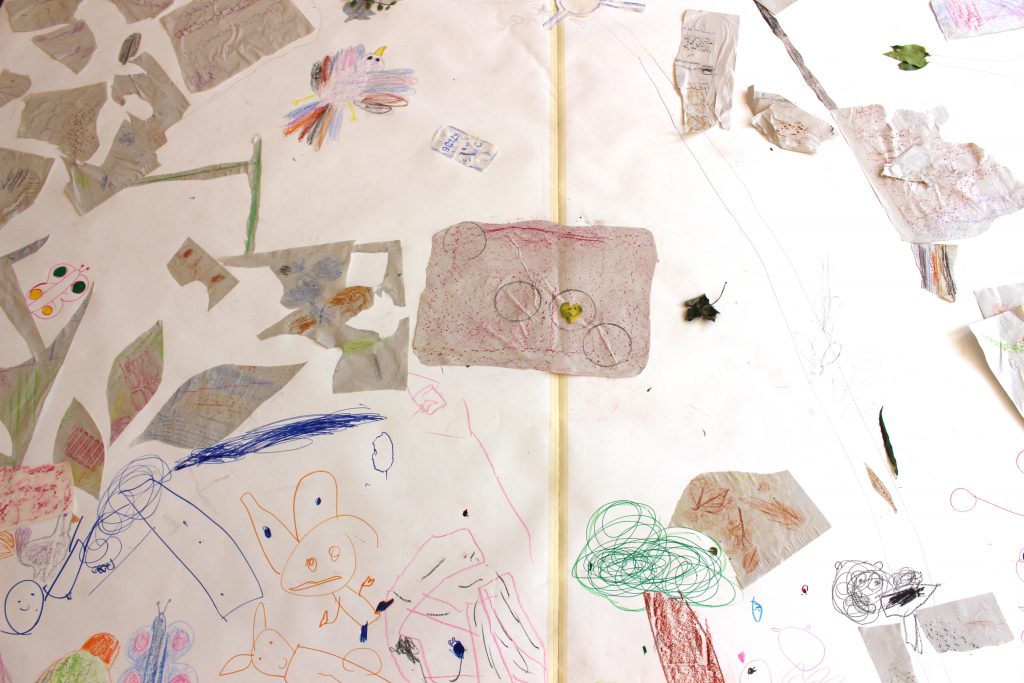