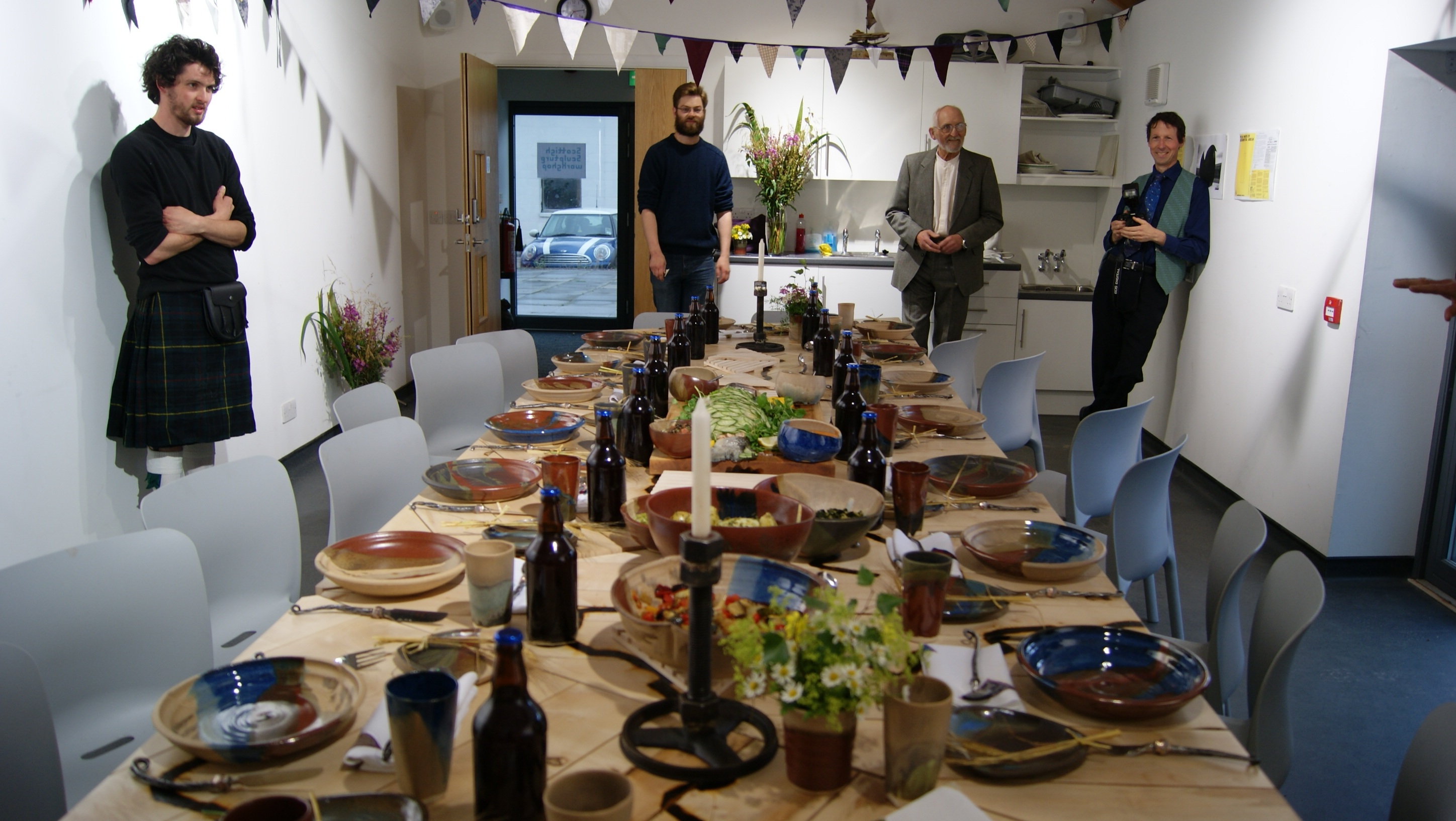 The idea for ‘Makers’ Meal’ was born through a desire to explore the process and results of collaborative making towards a common goal. In this case, to prepare everything that would be needed for a meal: tables, crockery, drinking vessels, napkins, food and wine. So whilst objects were being made the final goal was to be able to sit down and eat together on a certain date. A number of makers were invited to take part and were given a fixed time scale and a very limited budget to complete the work.

Making a Meal of Things
A table, a menu, a meal, a sculpture workshop, a short and experimental project concerned with making and making together – things in common that relate and separate us at the same time, which is to say they stimulate social, political activity. ‘Politics has the function of bringing people out of isolation into community’ according to one stirring manifesto from a relatively distant time and place, and although the local issues of one situation may seem equally distant, they also reveal a common desire to generate and practice in the ‘means of finding meaning in social life’.
– Dane Sutherland, The Makers’ Meal Newspaper 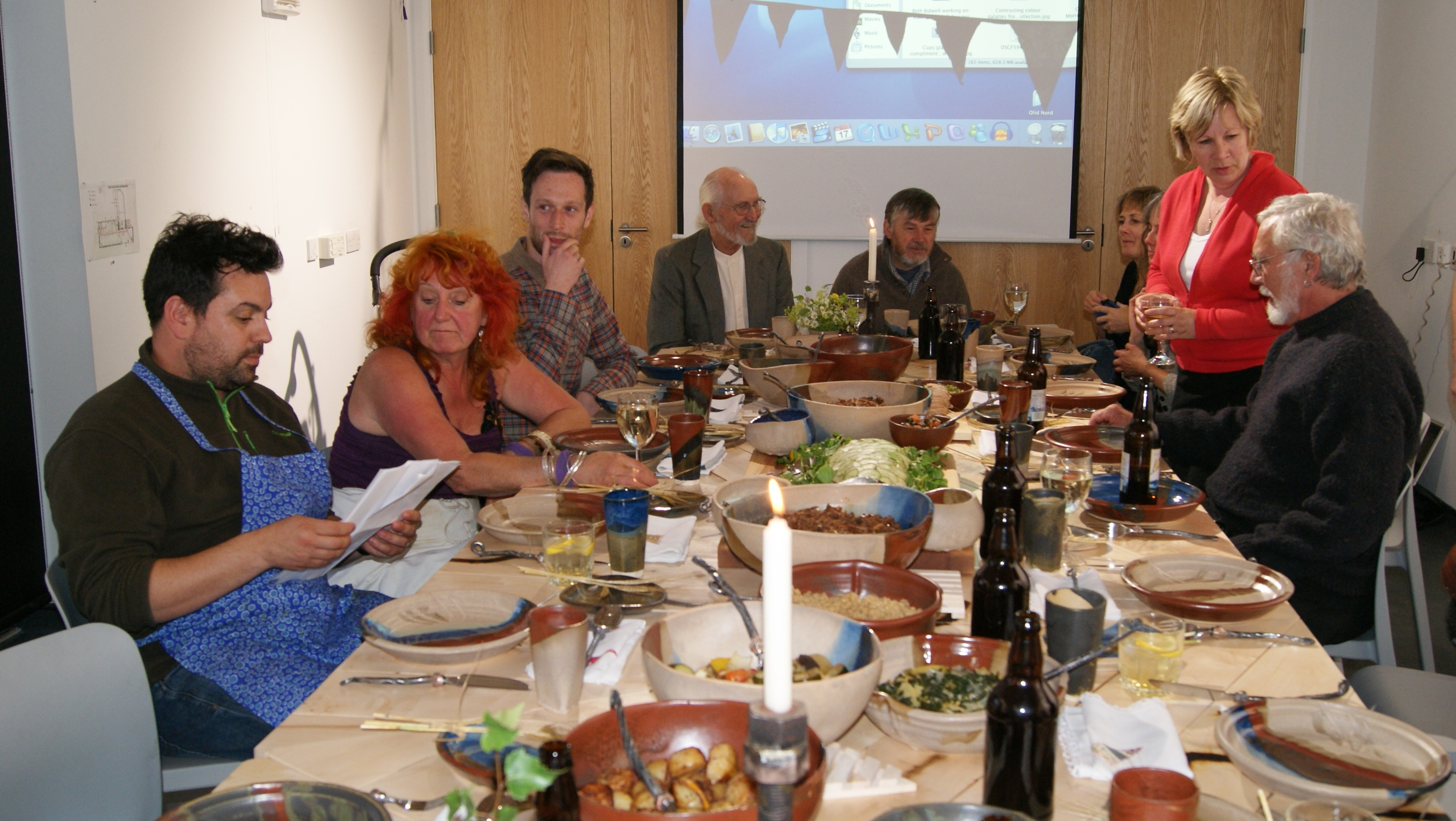 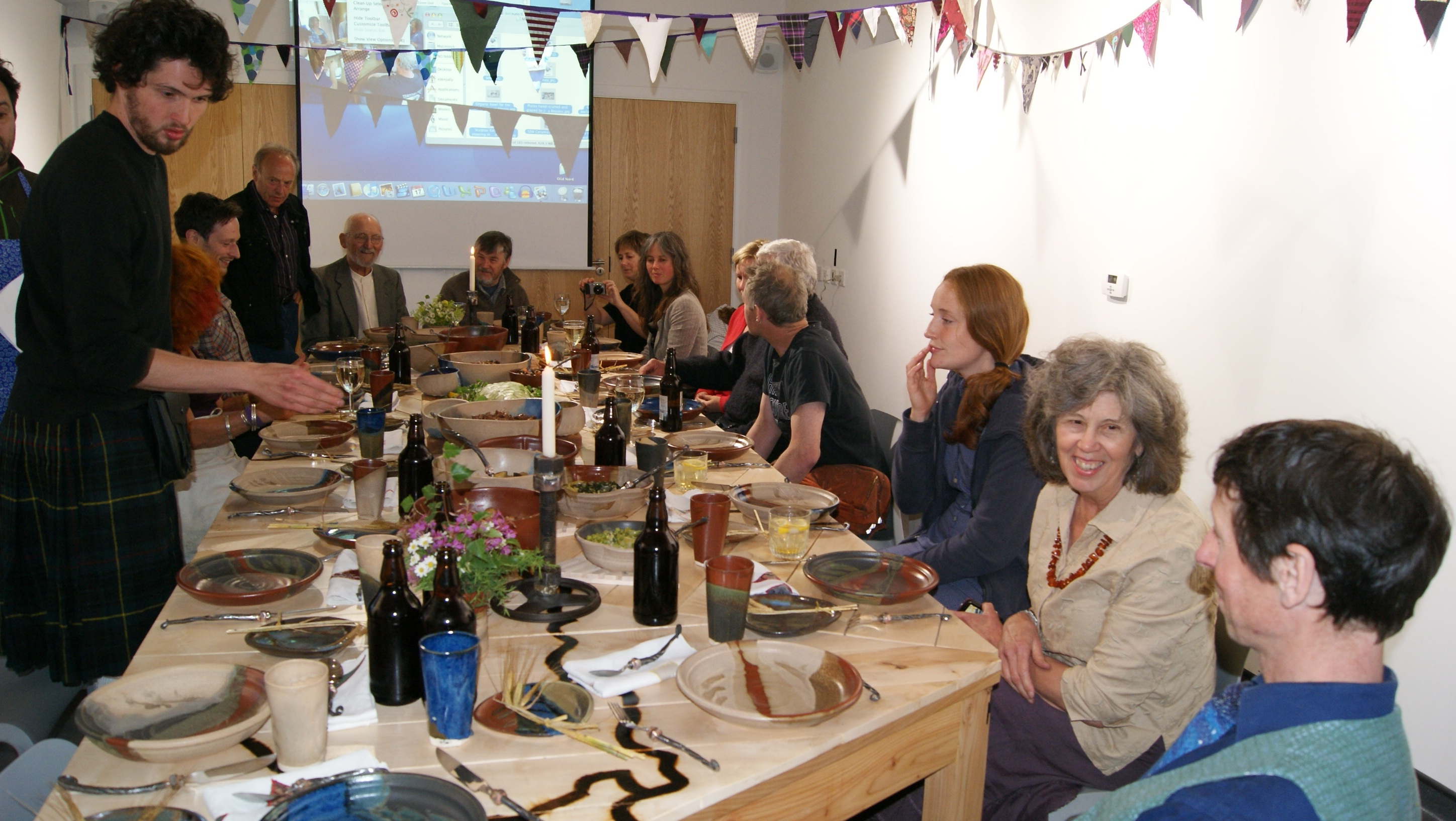 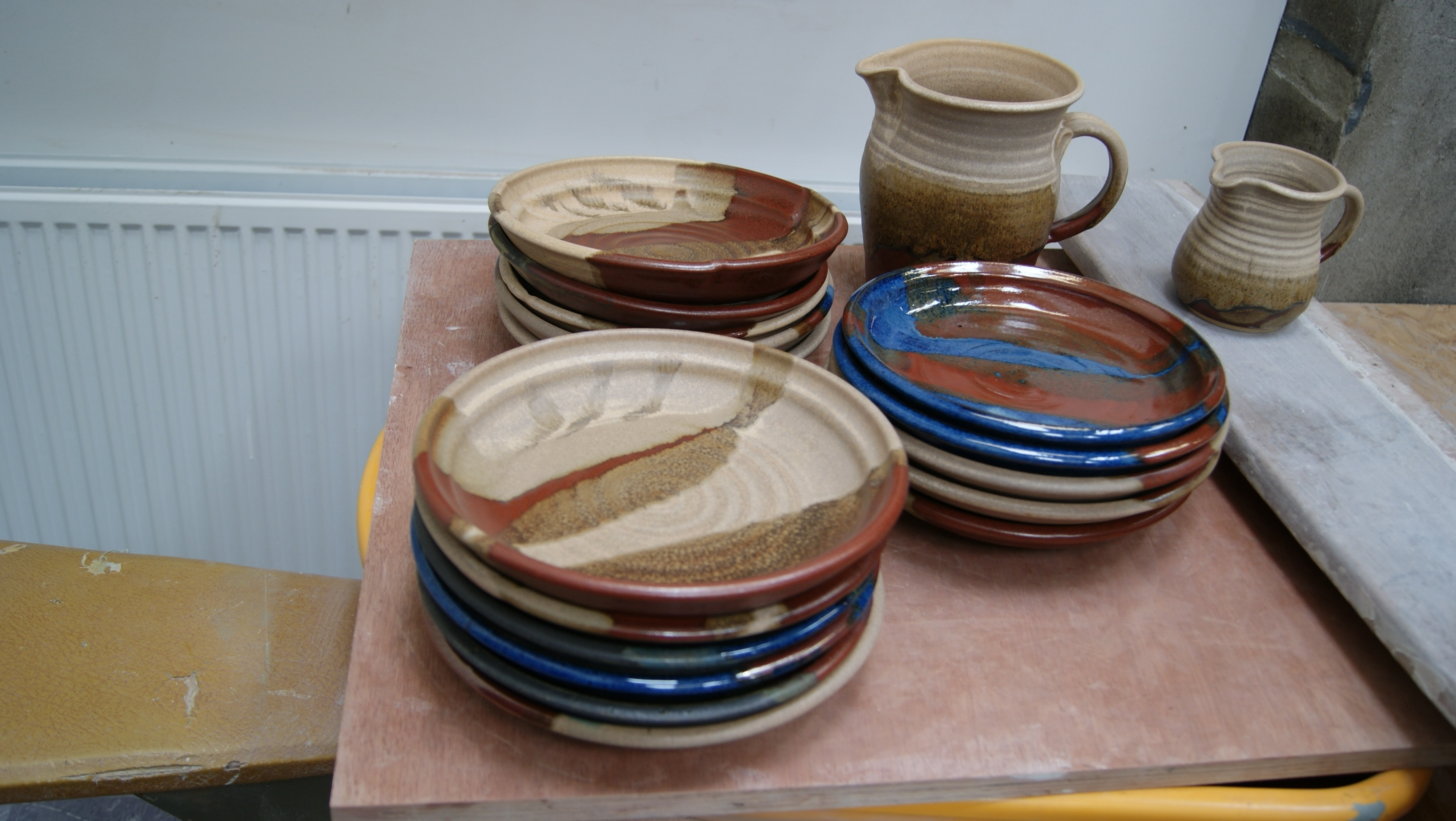 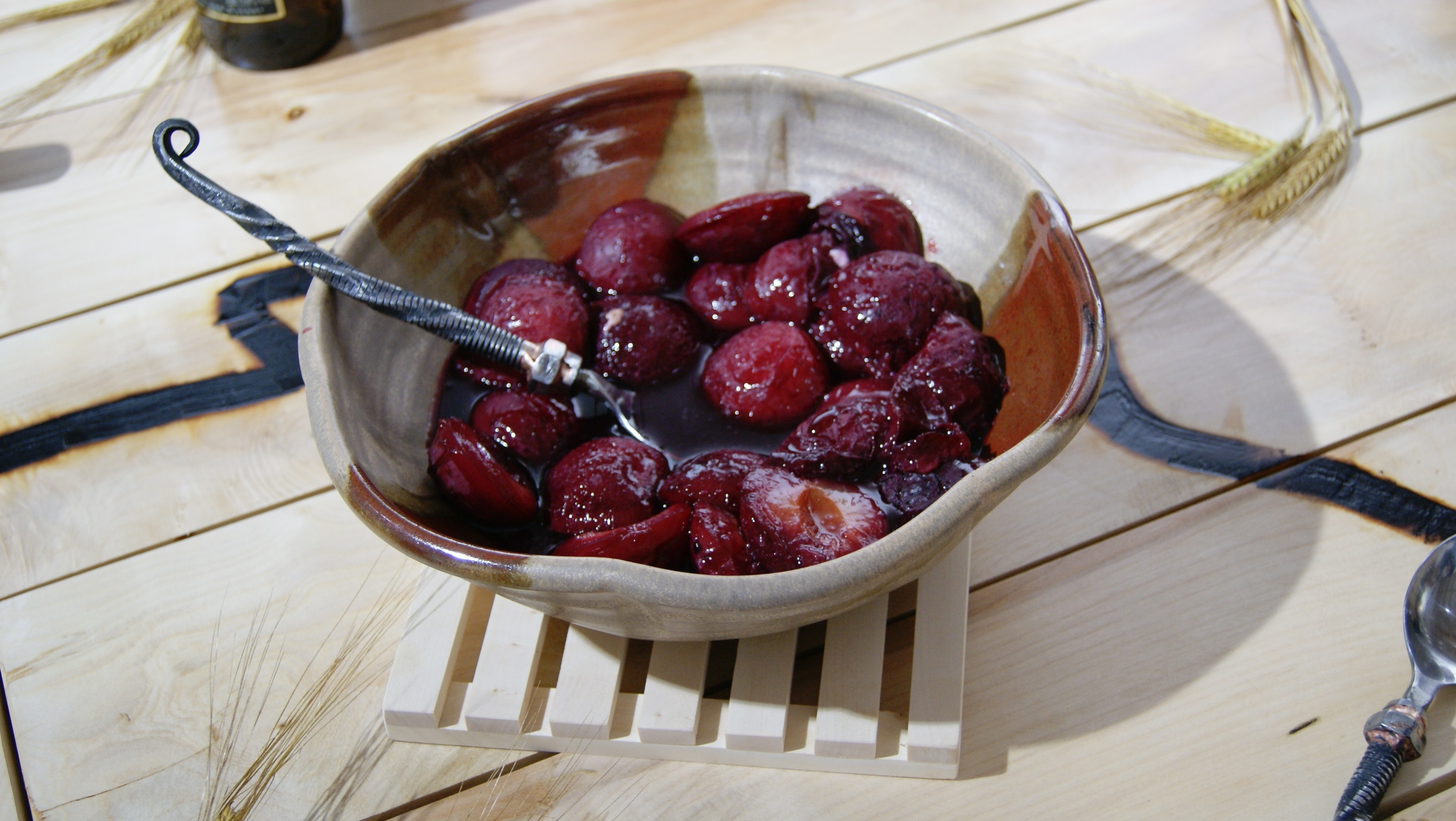 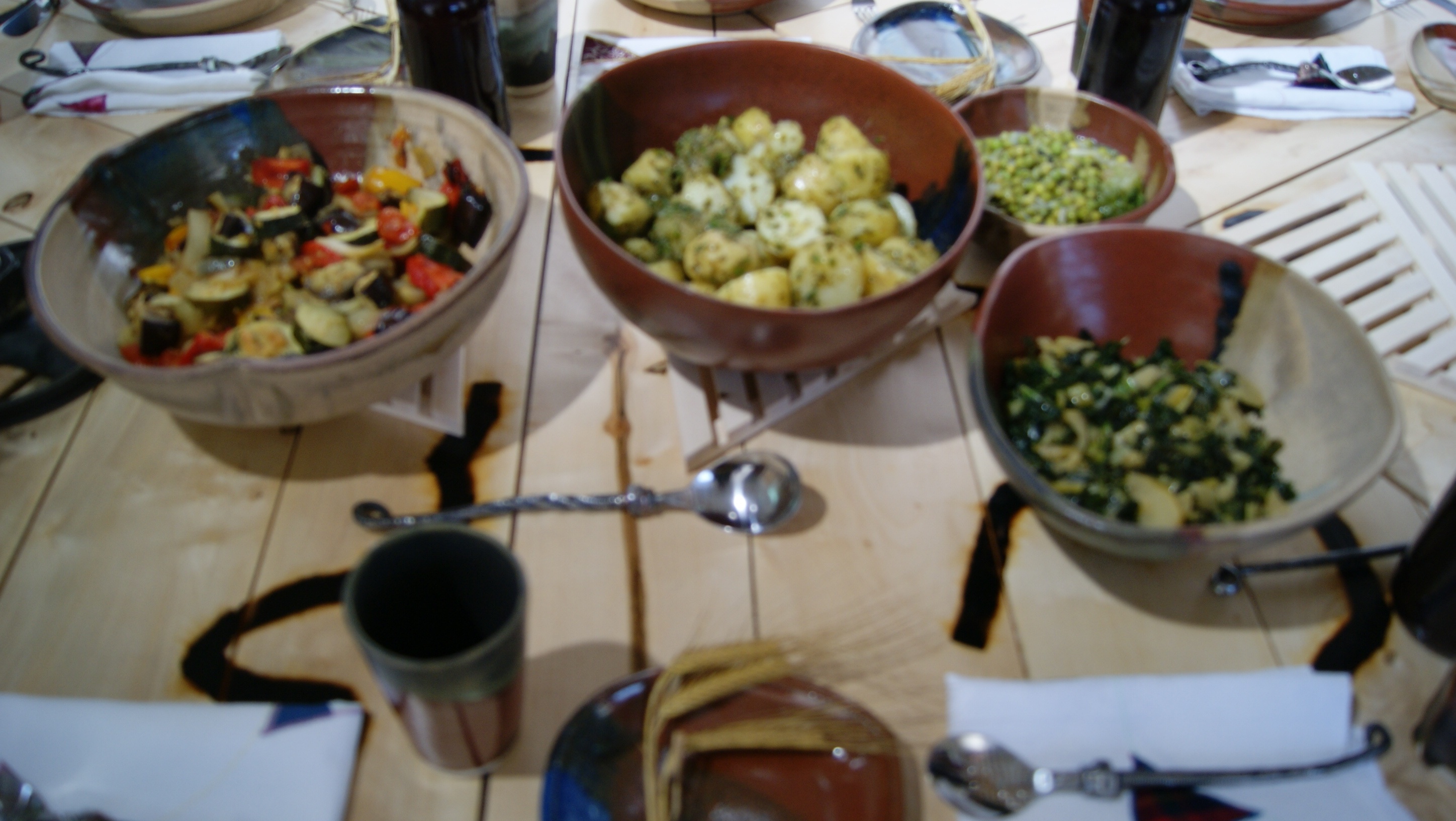 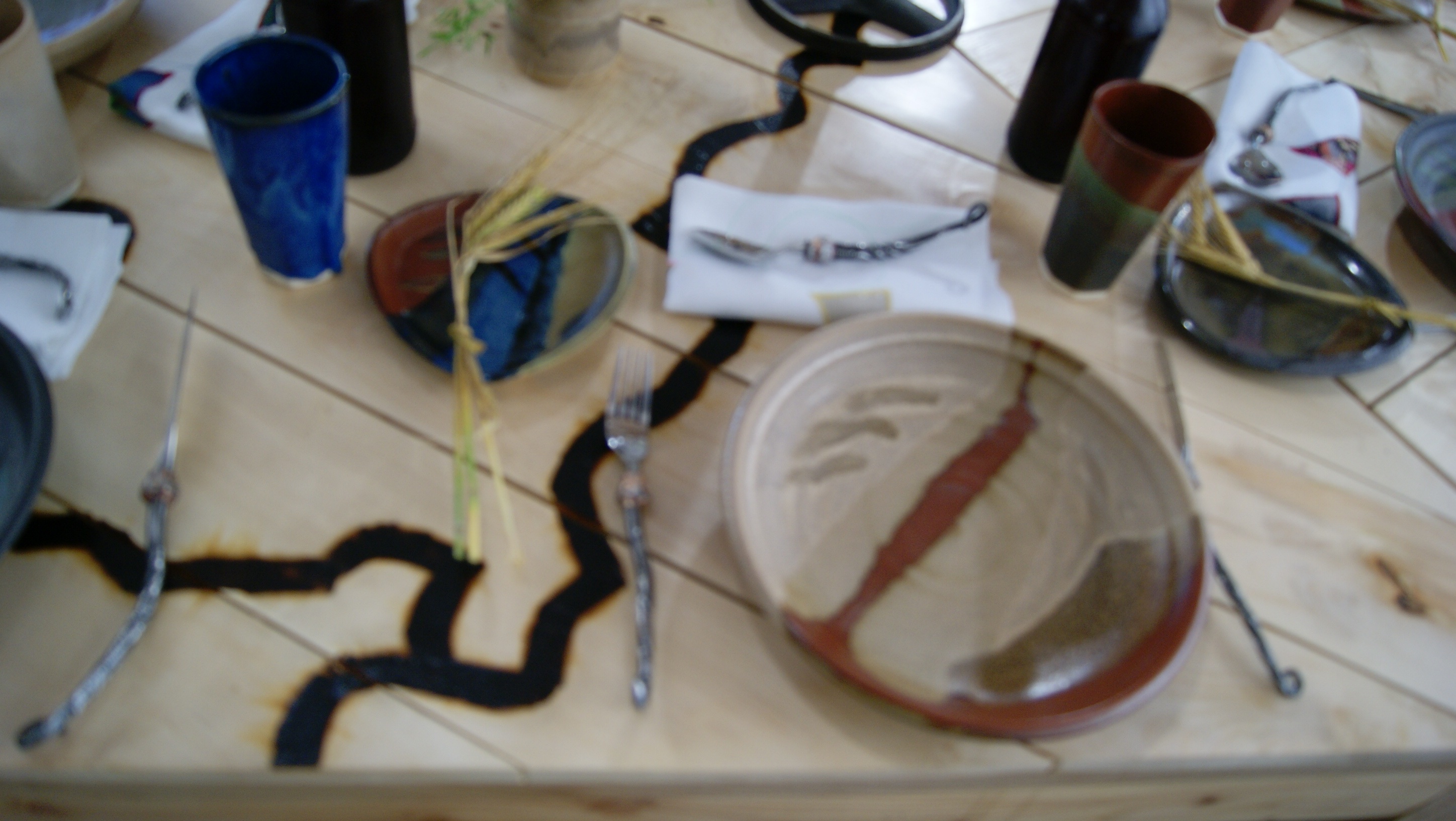 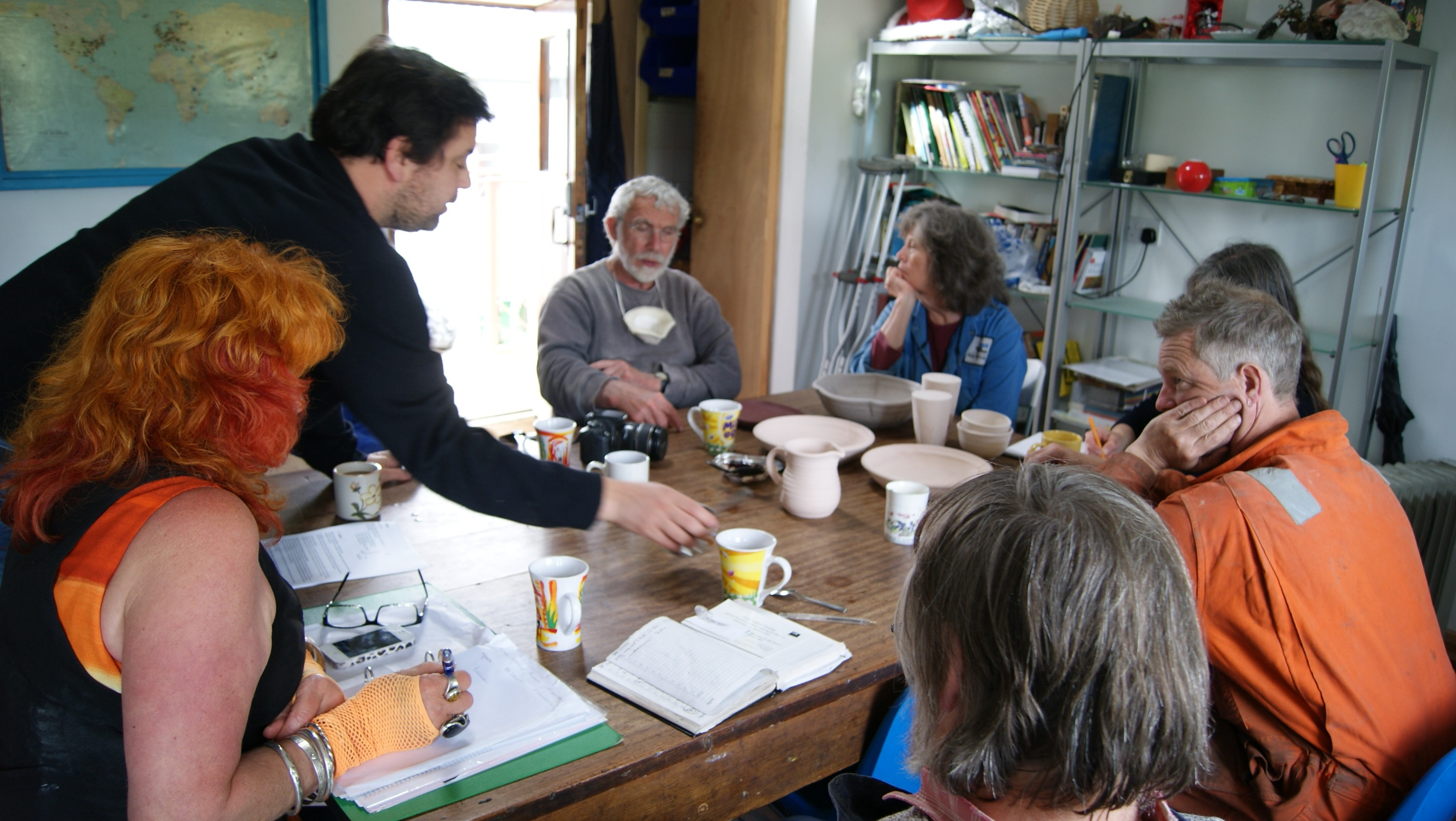 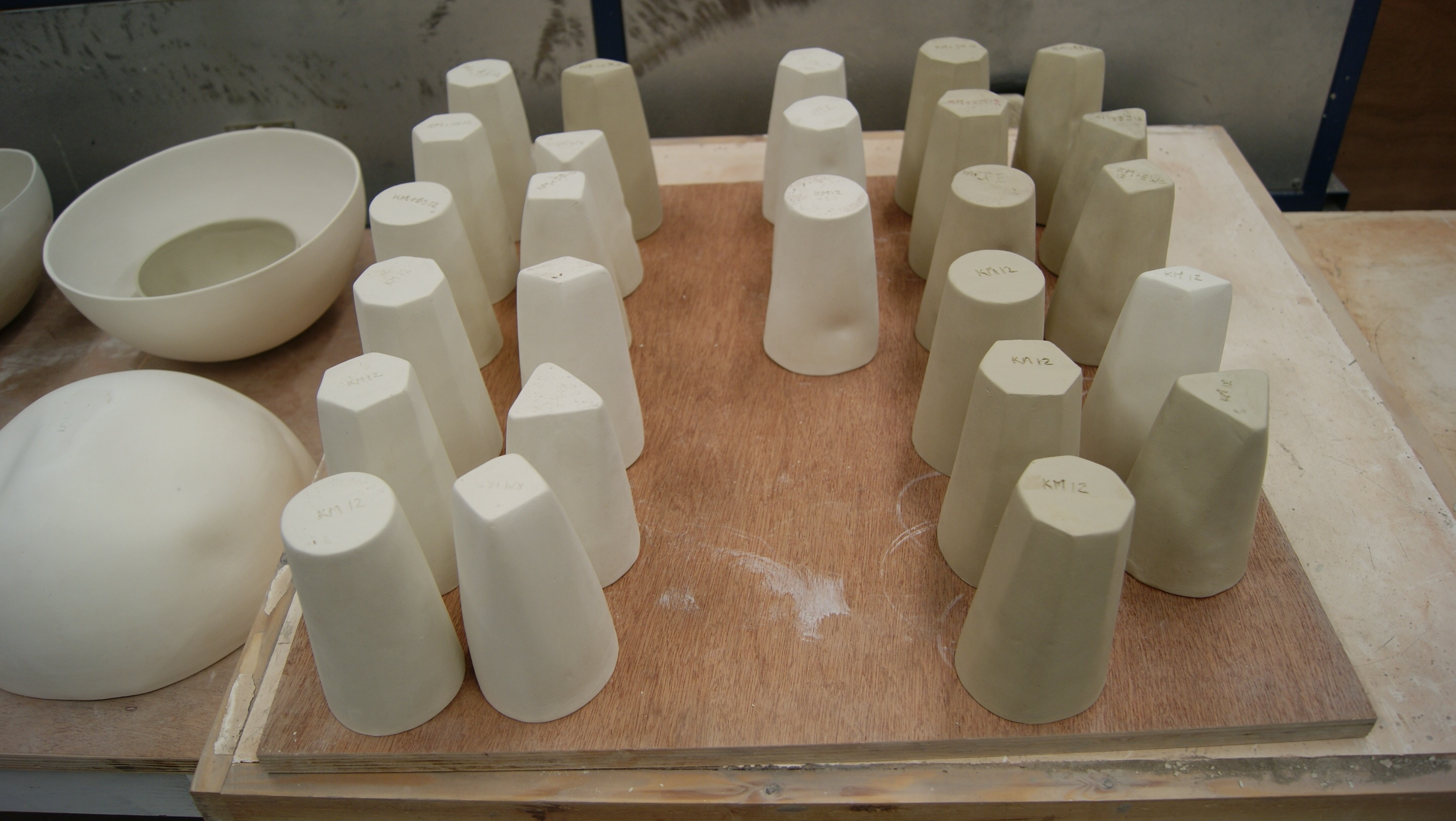 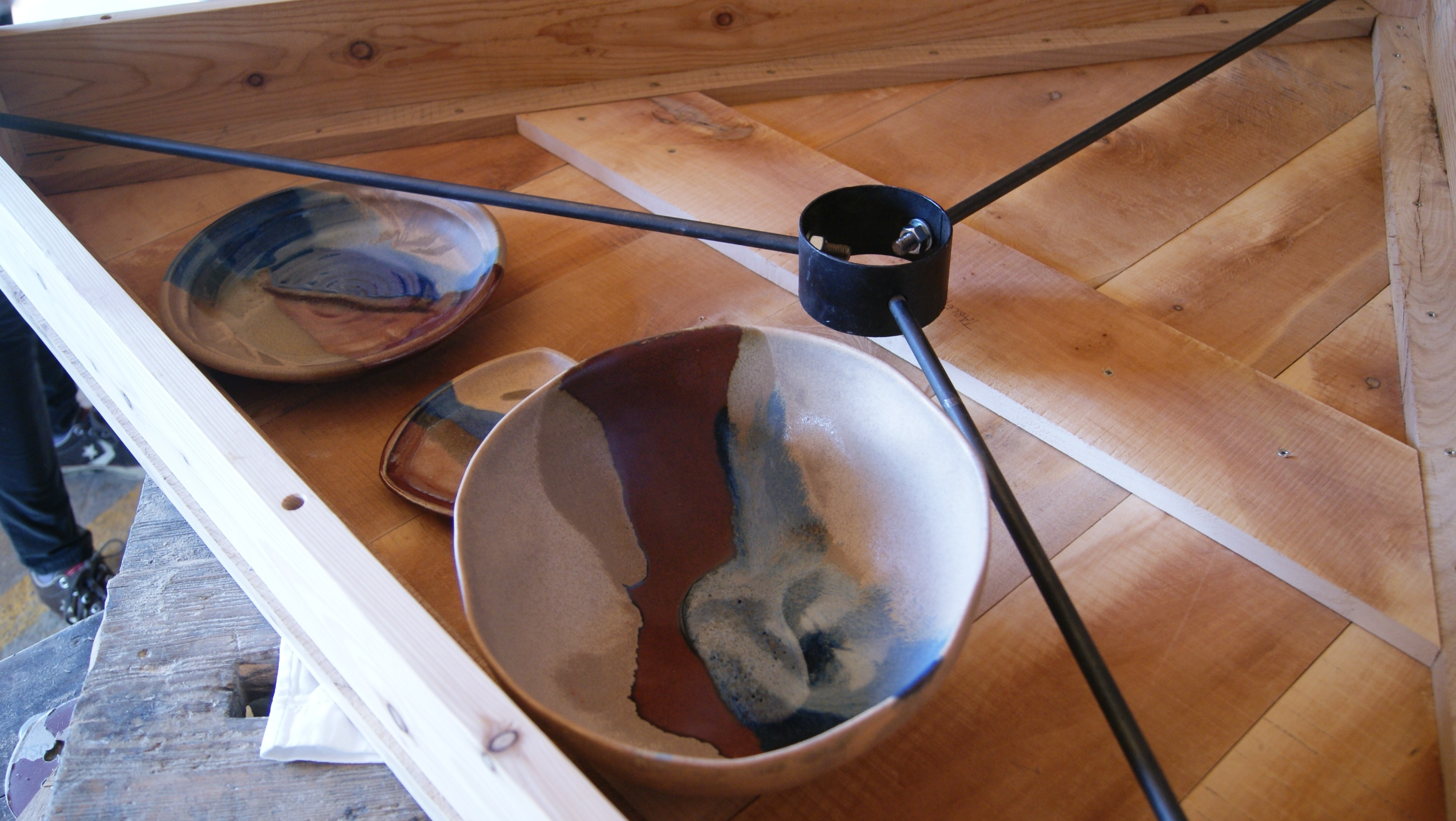 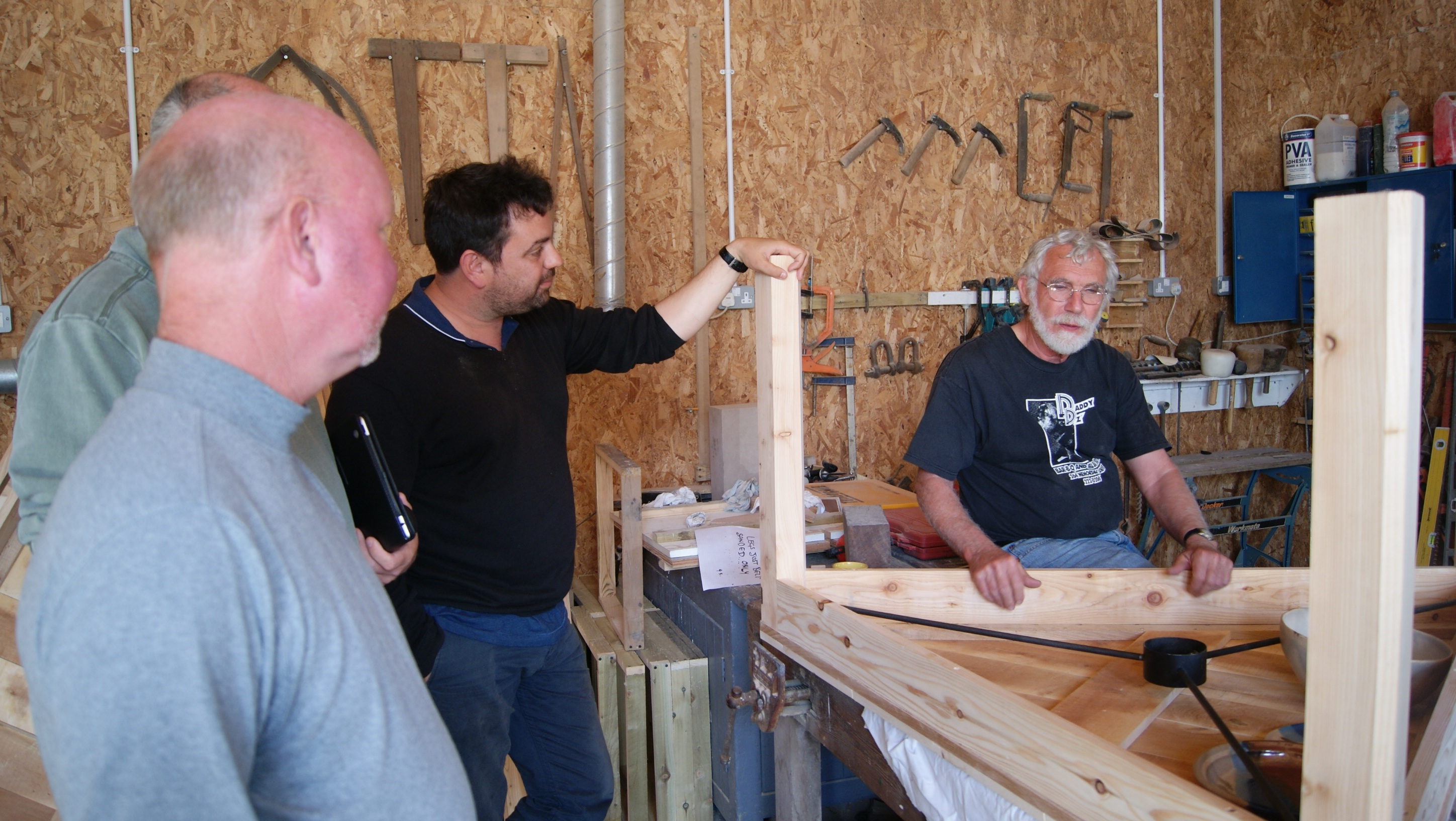 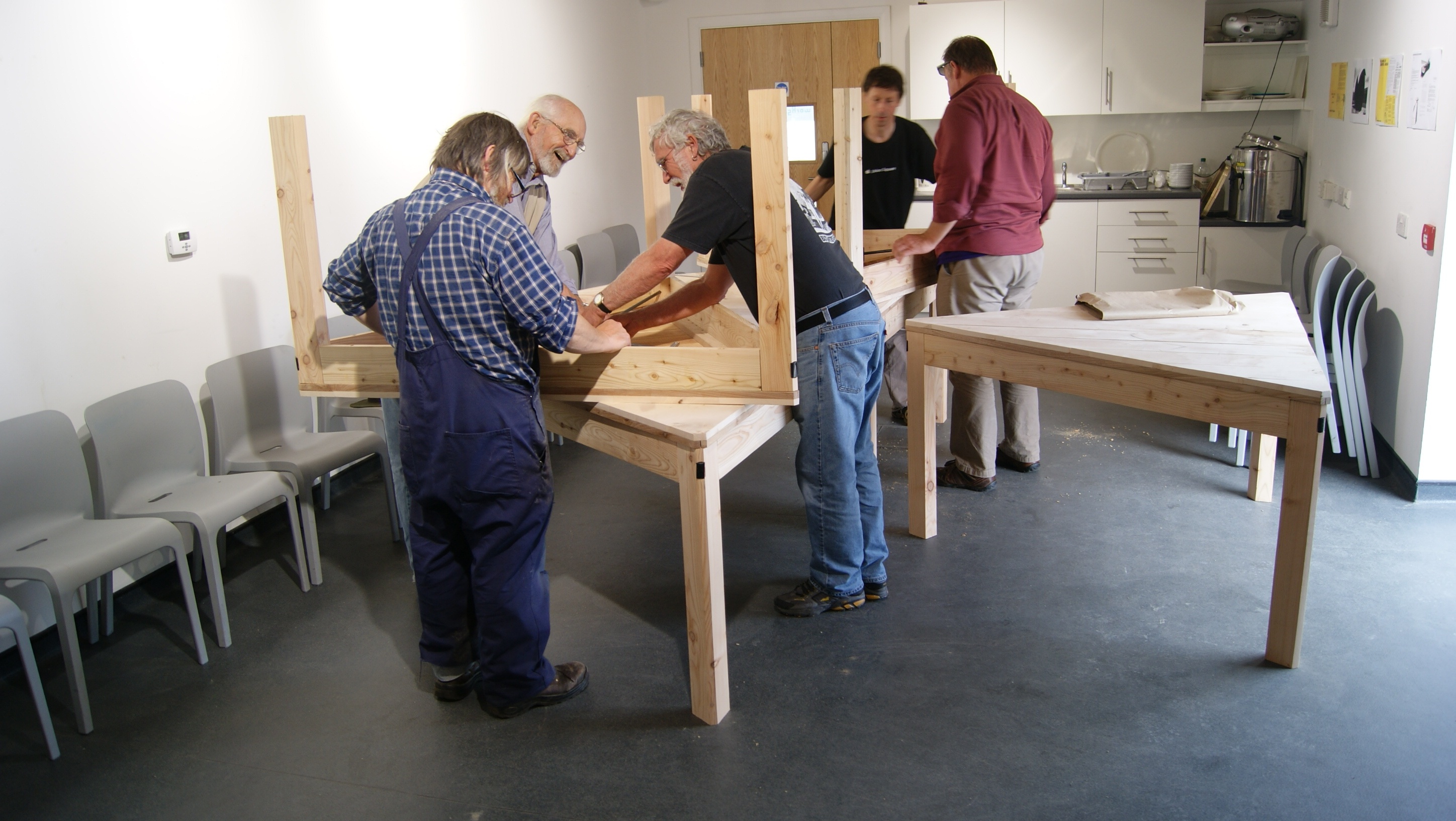 Working out the tables 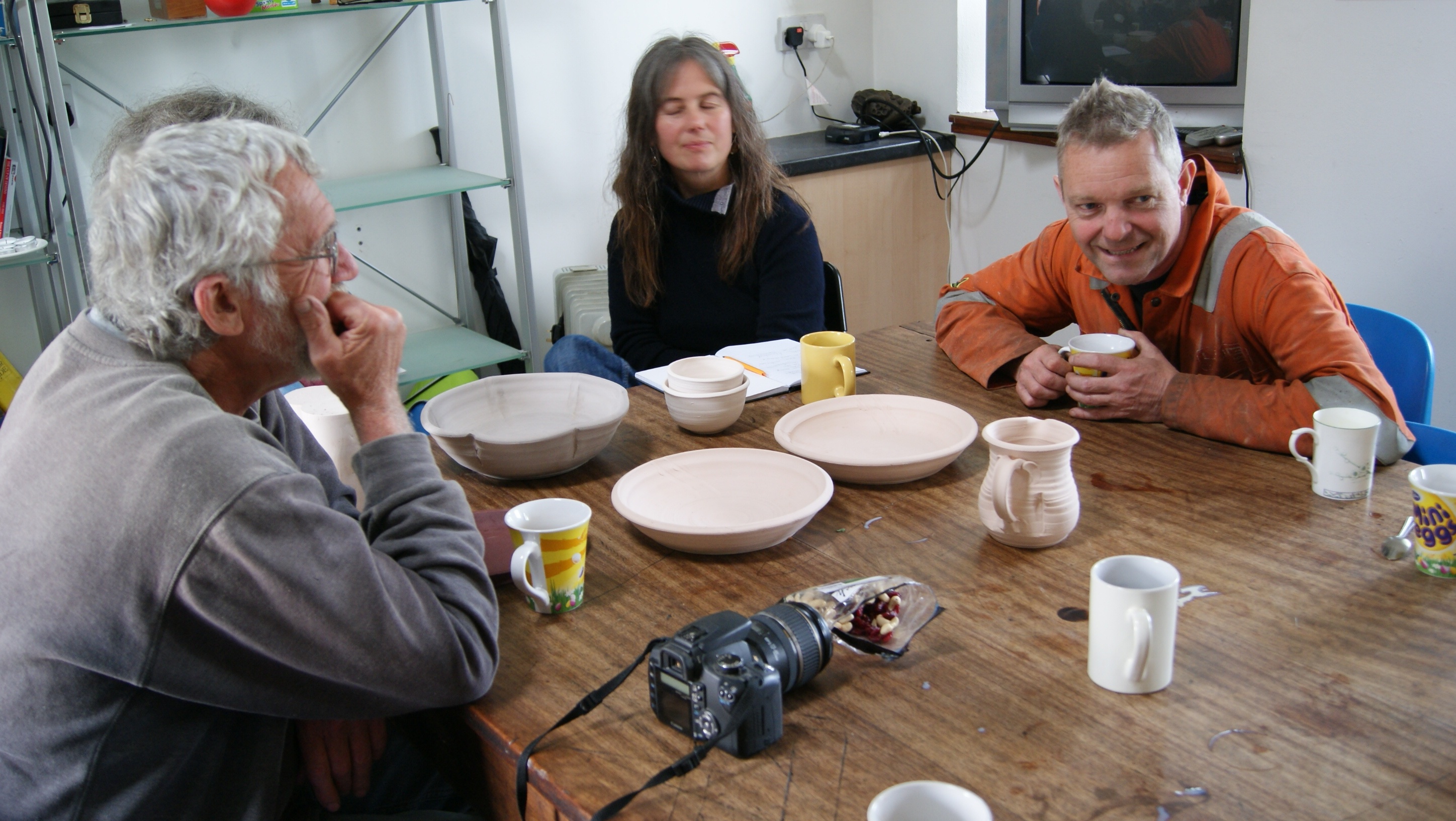 Curator Sara with Eden and George 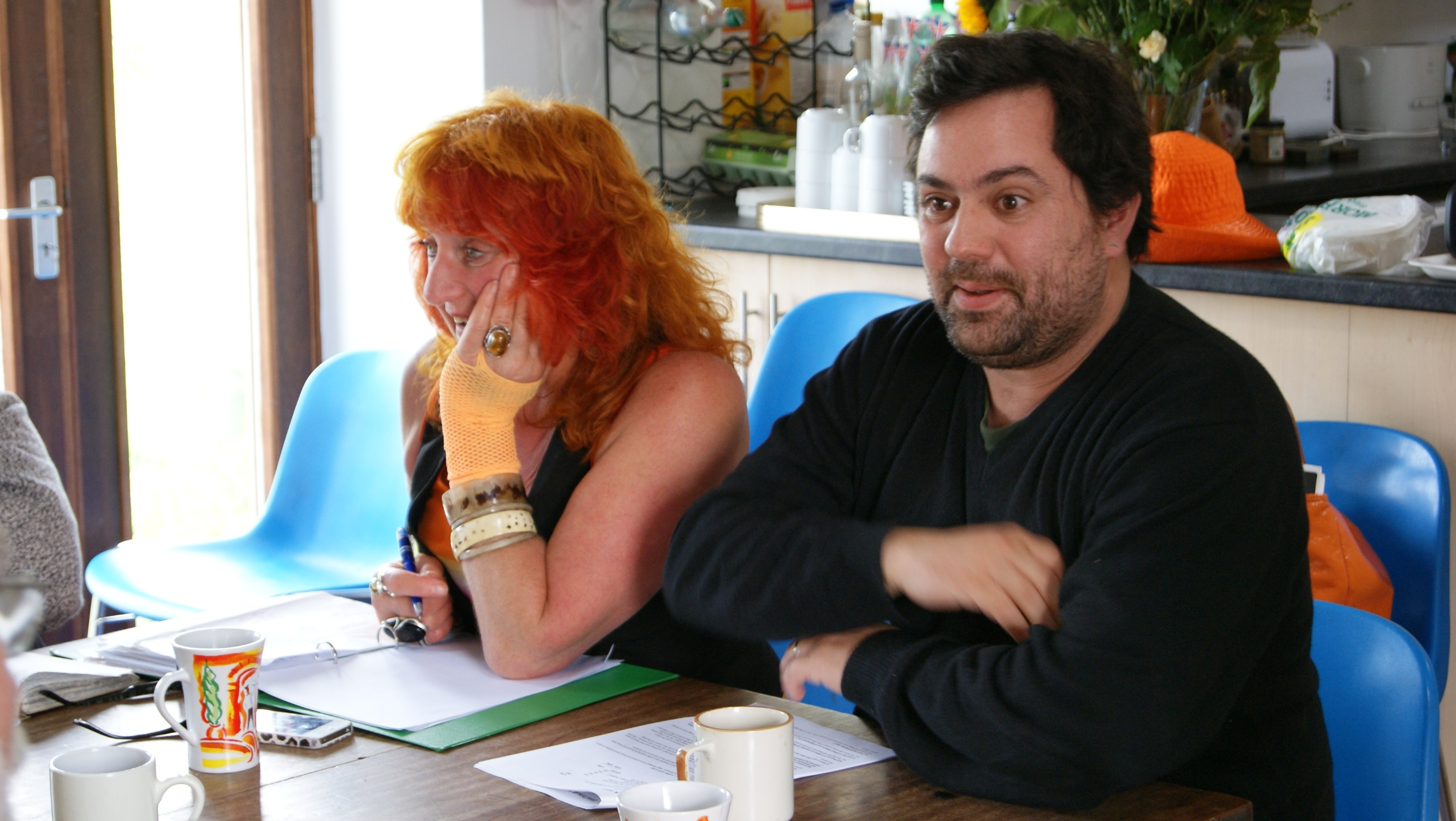 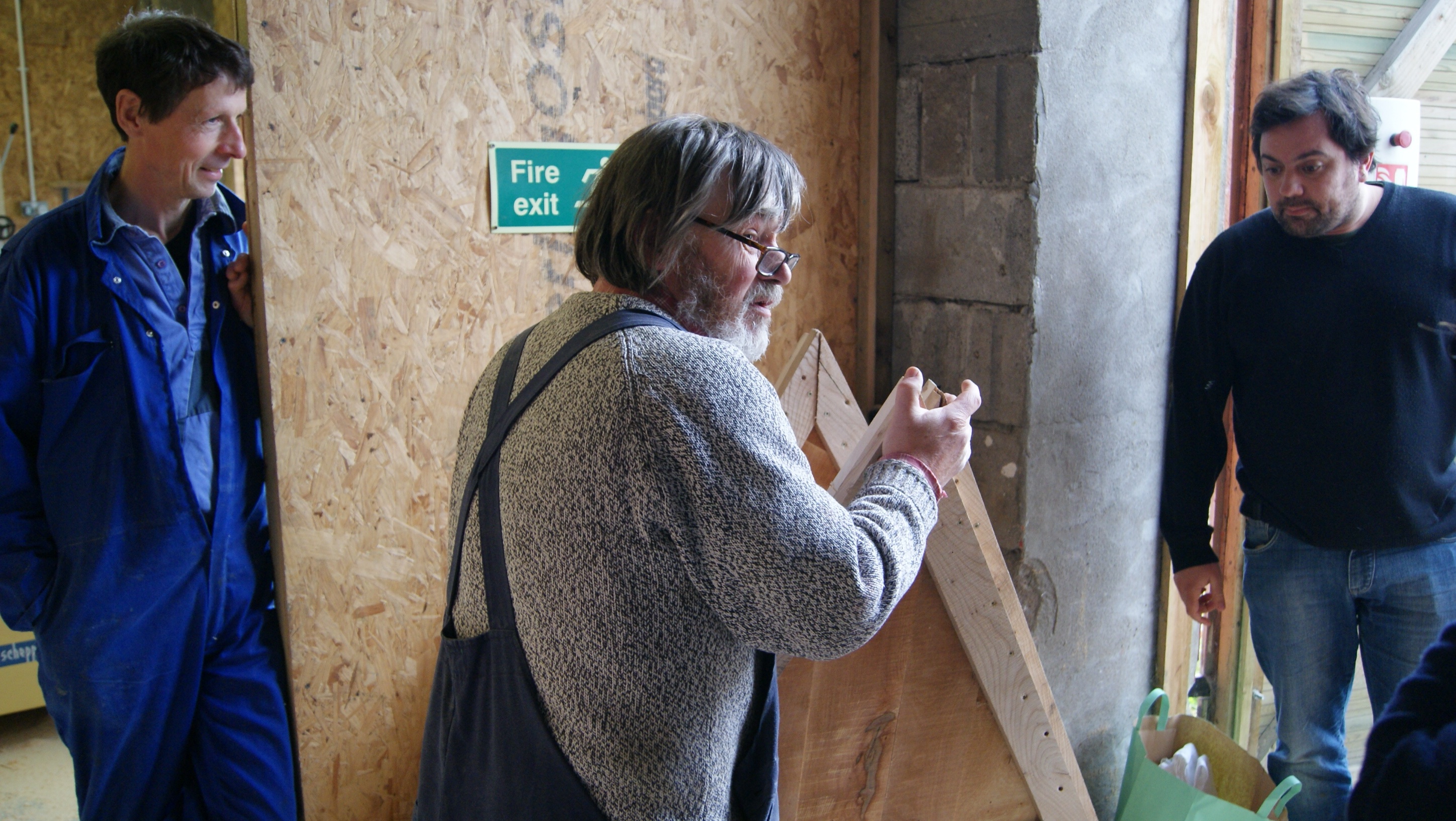 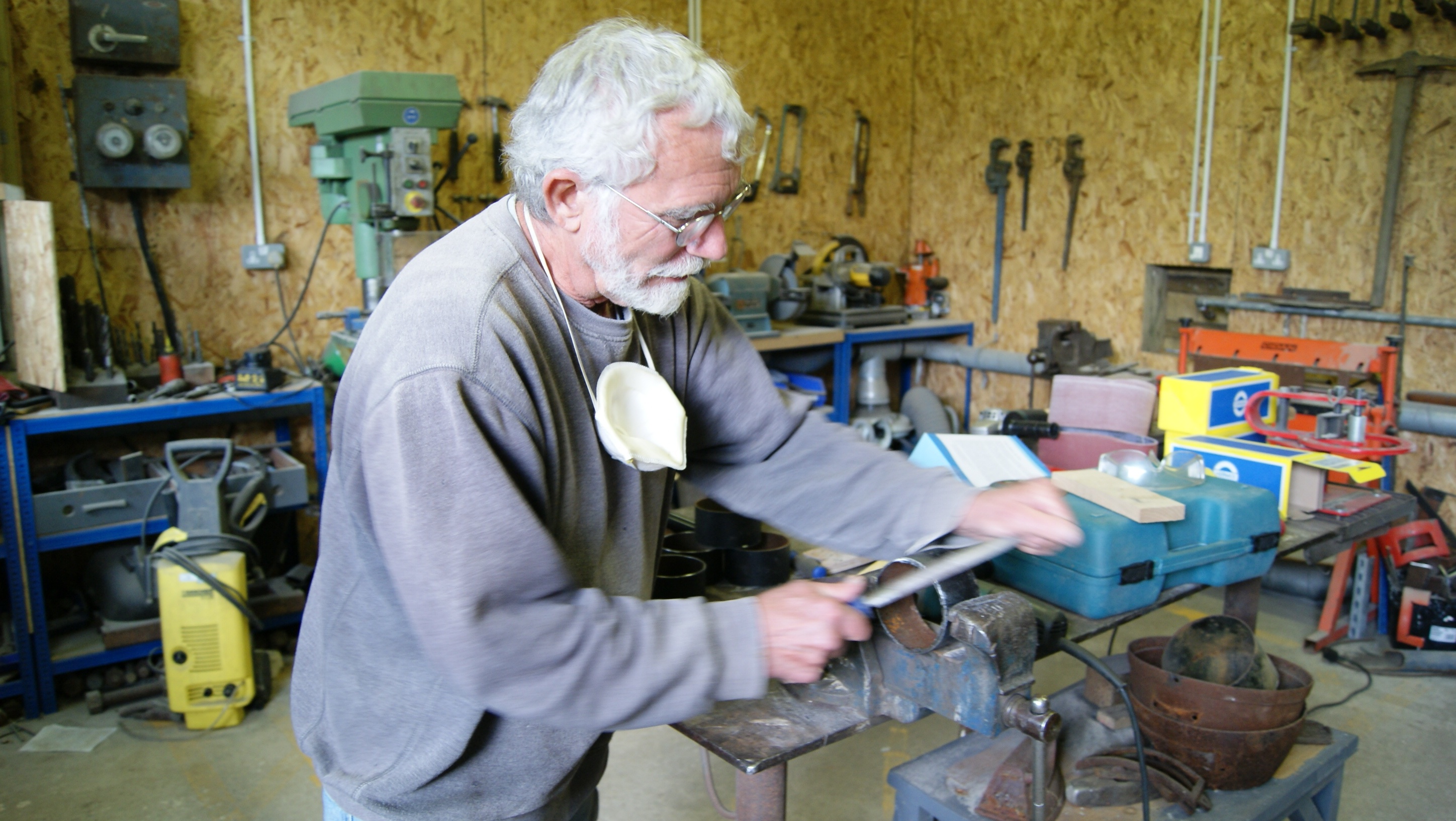 George working on the tables 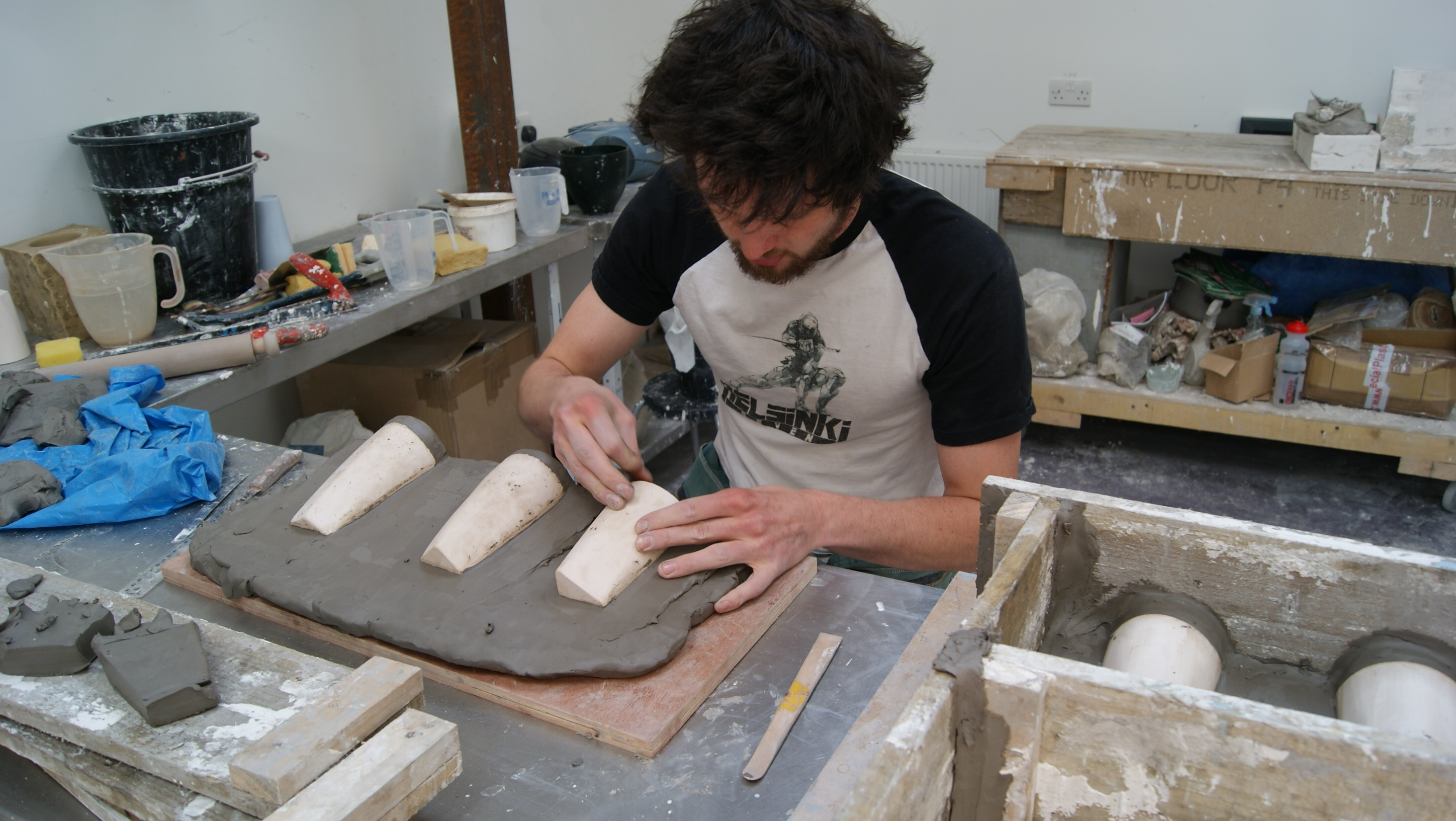 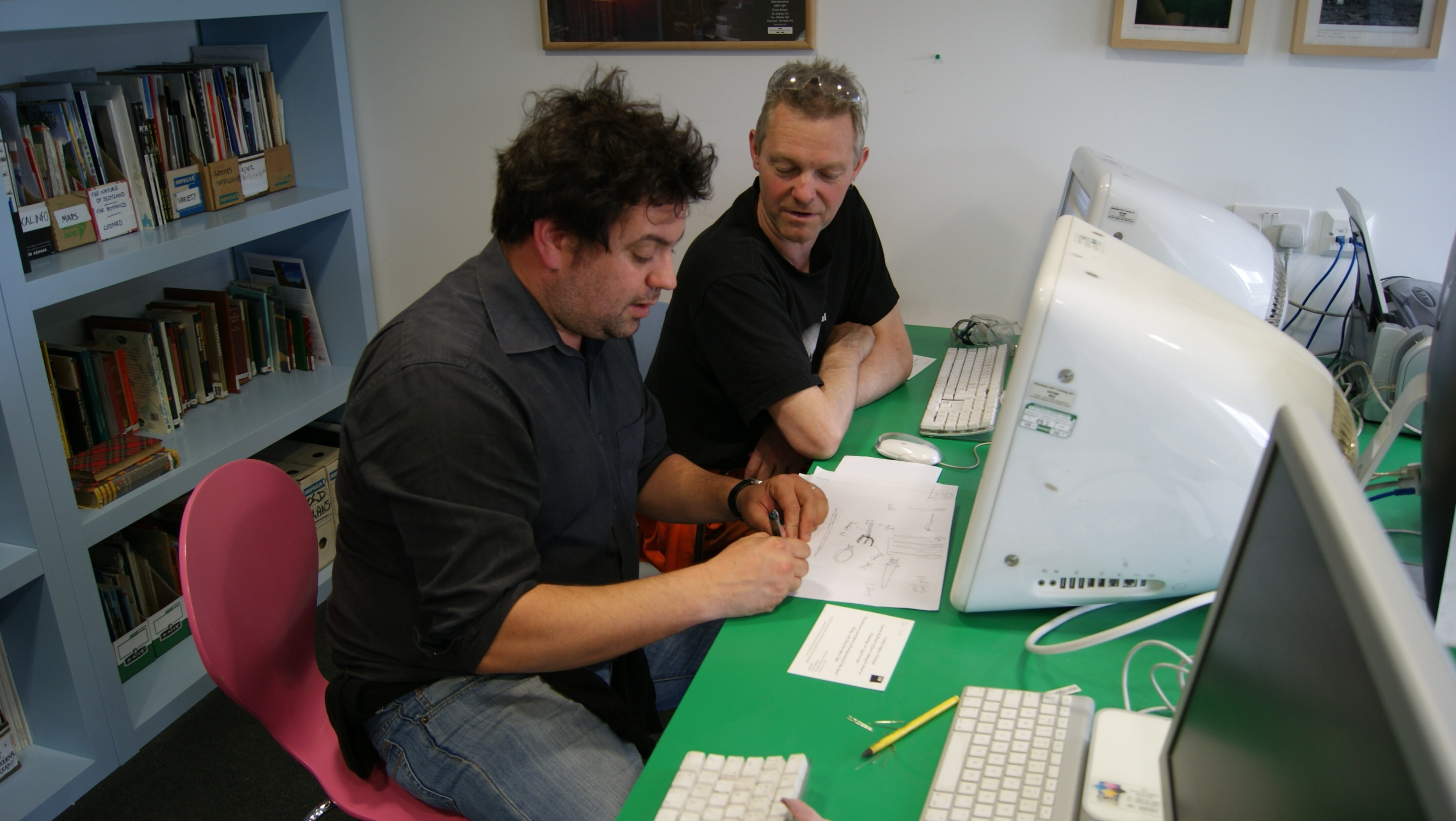 Working out the cutlery 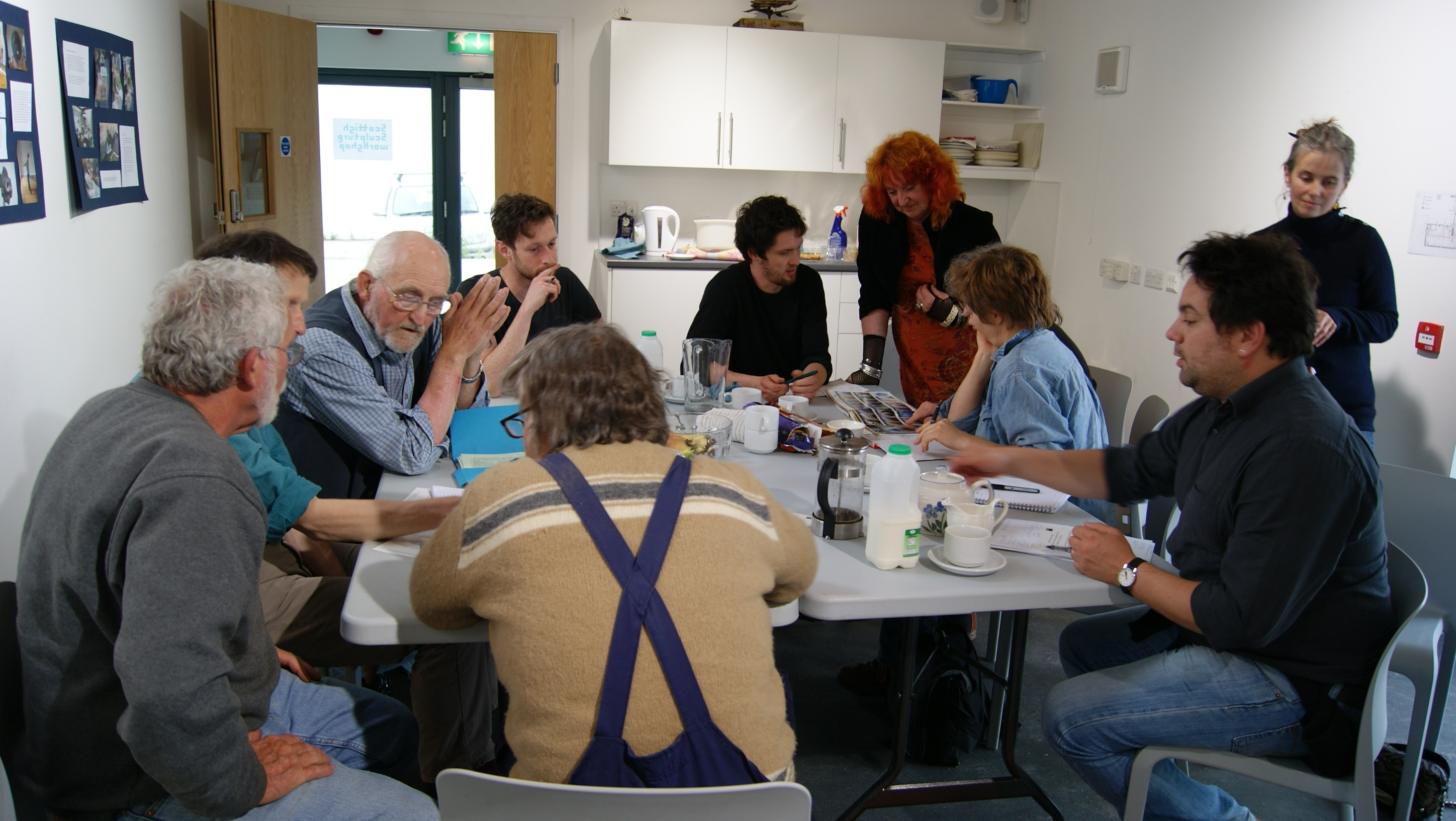 Description
Through the involvement of contemporary artists, artist-artisans, technicians, board members, interns and the SSW staff, the process of collaboration successfully created the components required to host a meal for twenty people: six wooden triangular tables have been carefully designed and fabricated; crockery and serving dishes intricately produced; cutlery, napkins and table dressings skilfully crafted. The original Makers’ Meal set was put in place over the twenty-four hours preceding the event of the meal, after two months of intensive making. Once all components were assembled, the makers were able to sit and eat together, discussing the progression, problem solving and final success of the project. As a collaborative journey, the makers were able to share their knowledge and their appreciation for the skill and time each member brought to the table.

SSW invites this collaboration to continue, with the aim of communicating the experience of making collectively felt by the project’s participants to a wider audience. It is envisaged that the project will continue to facilitate discussions about making and collaborating through venues in Scotland and beyond.

Some things to think about:
-Why a table?
-Why a meal?
-What is the significance of food?
-How do we share ideas and skills?
-How to make this a sustainable project?
-What do we gain from collaborating?
-Exchange of ideas/skills
-Creative commons
-Collective making
-Artistic identity
-Fear of the unknown
-Learning from others

“The forms of objects are not imposed from above but grown from the mutual involvement of people and materials in an environment.”
– Tim Ingold, The Perception of the Environment

“To live together in the world means essentially that a world of things is between those who have it in common, as a table is located between those who sit around it; the world, like every in-between, relates and separates men at the same time.”
– Hannah Arendt, The Human Condition

“Really we should say ‘workout’ instead of ‘network’. It’s the work, the movement, and the flow, and the changes that should be stressed. A common world, if there is going to be one, is something we will have to build, tooth and nail together.”
– Bruno Latour, Reassembling the Social

Collaborative Making: An Ode to SSW
Thinking  of the numerous and diverse individuals who contributed to the Makers’ Meal, its formation and the discussions surrounding it, I cannot help but think of the network of people who make Scottish Sculpture Workshop what it is on a daily basis. It  too is a plat unique, an adopted form, a platform, something that changes and lives through the people that work there and use its facilities.

The ‘coming together’ of the various individuals is what galvanises the emergent properties of of such an assemblage – Makers’ Meal for instance was only possible through the cooperation and collaboration of curatorial thinking, artistry, discussion, personal investment and highly competent skills: SSW of course acts like some kind of giant magnet for theses things in all their diversity.

The plurality of voices and ideas, the differences that make the place, is what provides the dynamism and activity that is not organised around the controlling trajectory or vision of a single individual, and is responsible for both the unique impact it can have as well as the inability to totalise it as a fixed entity, or, as the saying goes, it is more than the sum of its parts.