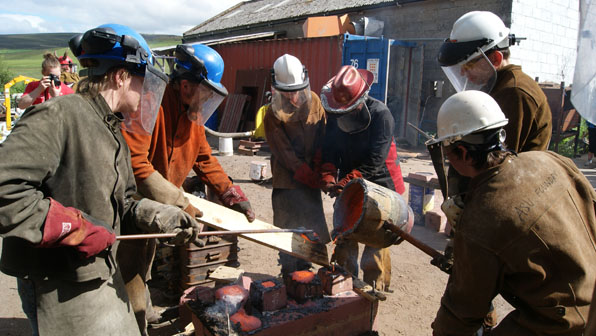 The USUK Public Iron Pour was a great event and had a full crowd gathered to watch open mould-rolling performances with the molten iron, carried out in the capable hands of the USUK professionals and the SSW technical team.

The public pour saw the finial pieces being made by several of the USUK artists including Geoff Hockley, Austin Sheppard, Kelly Wilton, and USUK Director Coral Lambert.

Coral Lambert ran the furnace as well as ensuring everything was in place for a successful pour in the week leading up. Coral provided invaluable mould making technical advice especially on large complex moulds such as Ben Woodeson’s complex winding metal pole piece, cast using polystyrene tubing, seeing it through every step of the way, 24 hrs of the day. On the day of the pour Coral, also ensured that molten metal was melted and directed to the molds safely, as furnace operator and mould captain.

Coral also cast a series of small sculptures herself, and miniatures of her cloud formation works with text interwoven throughout the cast iron, referring to the Scottish waulking songs that are sang during the working of tweed. Coral stated that these traditional songs appealed to her as they are rhythmical much like the rhythm of a furnace or the rhythm of a group working towards a common goal as with a USUK pour. Ferrous Chakra, which is now temporarily installed in the SSW grounds, was another piece Coral worked on over the course of the symposium, a 4ft-high stacked piece as another in a series of cloud formation pieces.

SSW’s own Emily Gray and Kevin Andrew Morris, Ginny Hutchinson, Eden Jolly and SSW patron George Beasley also got involved, with Kevin helping to break up iron to be melted in the build-up to the pour, and Emily, Eden and Ginny mucking in during the pour, helping the USUK artists to gather and pour the metal at various stages throughout the process.

Kelly Wilton created a site-specific piece, pouring directly into the earth around a hand-built cairn outside the studio (see the picture below), which now stands eight boulders high. For anyone who wishes to take a closer look at the sculpture, it is currently situated in front of the SSW foundry. Kelly also poured more in a series of symbiotic works following on from the ones she created last Sunday in the first big production pour.

Geoff Hockley cast the remaining components of his relic piece, while others who had completed the casting of their own work pitched in to help those who still had more work to go. Jeff Crawford did a sterling job working in the foundry with visitors creating scratch block pieces  – and was on the scene finishing the pieces off soon after they had poured so that participants could take them home the same day.

Austin Sheppard also cast a few moulds in a series of works which he will continue in the US, a sequence of arms, all with hands positioned in various gestures, to spell out a word in sign language.

The SSW team also got a chance to try their hand at Kelly Ludekings’s ‘rolly-mould’ approach to iron casting. SSW staff wanting to give the process a try selected a vase sourced from the local charity shops, and once it had been in-bedded into a sand mould, they got prepared to shake rattle and roll. The moulds were poured in quick succession, and then furiously rolled and shaken outside the foundry for the crowd to see, leaving a small trail of molten metal as the insides of the vessels took form. Once the iron had cooled a few hours later, the outer shell of the vases and sand moulds were then cracked open to reveal the iron rendering cased inside. Each roll created a different effect, showing the variety of results that the technique can achieve. Thank you to Kelly for bringing a new way of casting to the SSW foundry!

Local musician Mark Rennie played an electronic drone set to accompany the pour, matching the tone set by the roaring furness and the energetic atmosphere surrounding the pour.