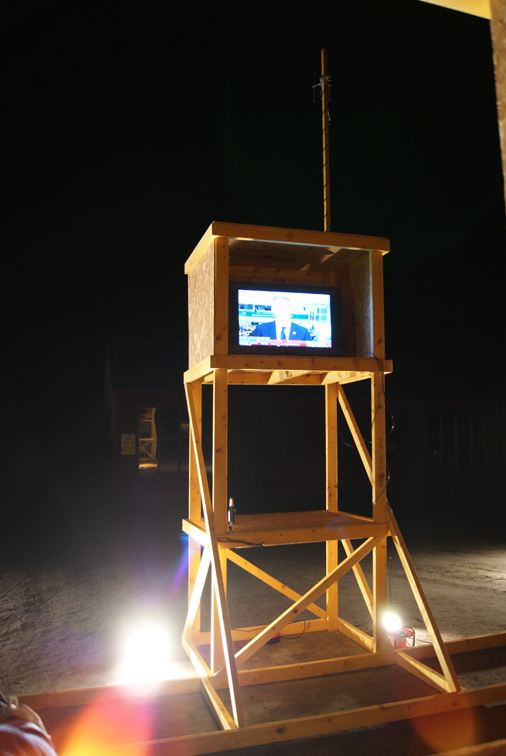 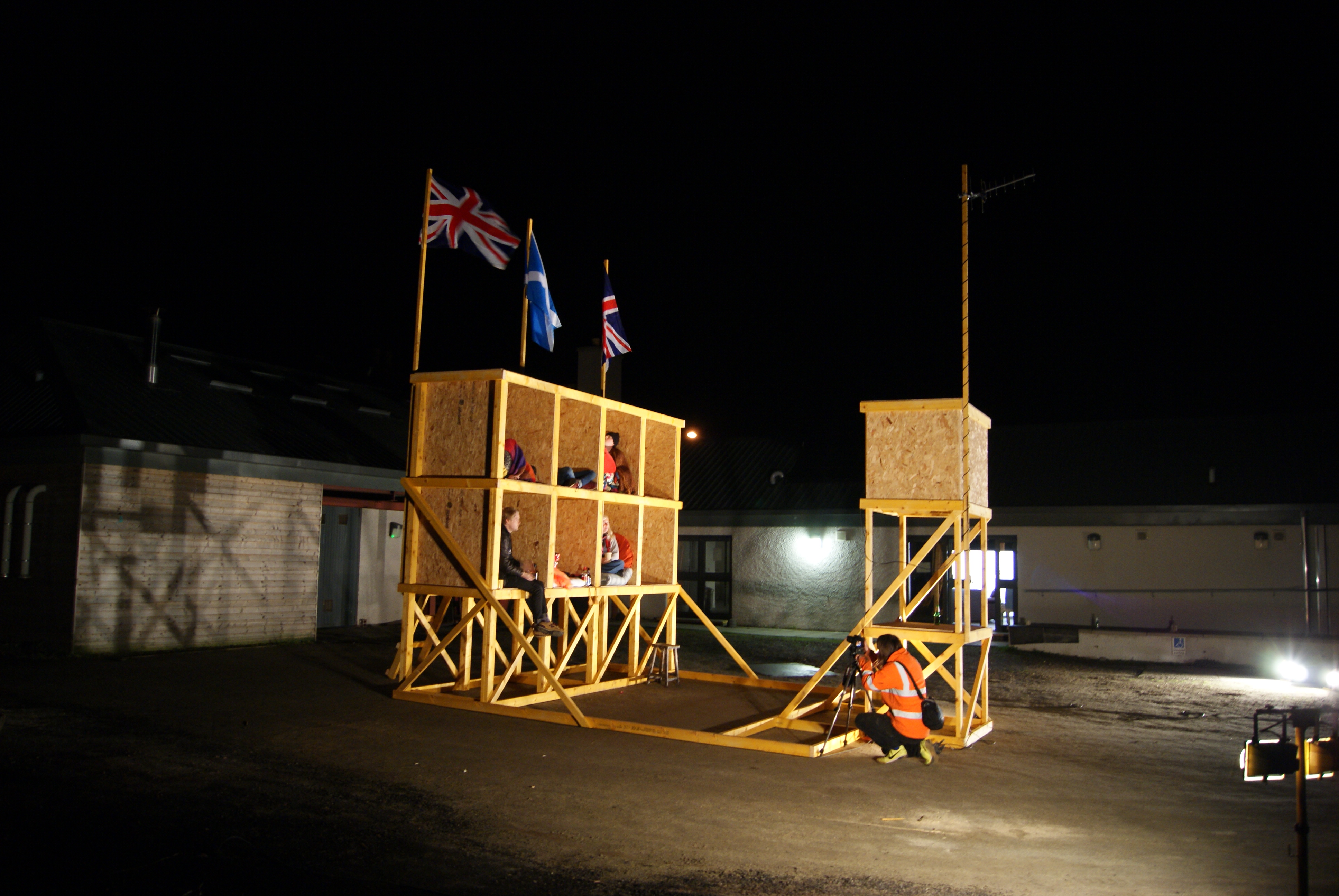 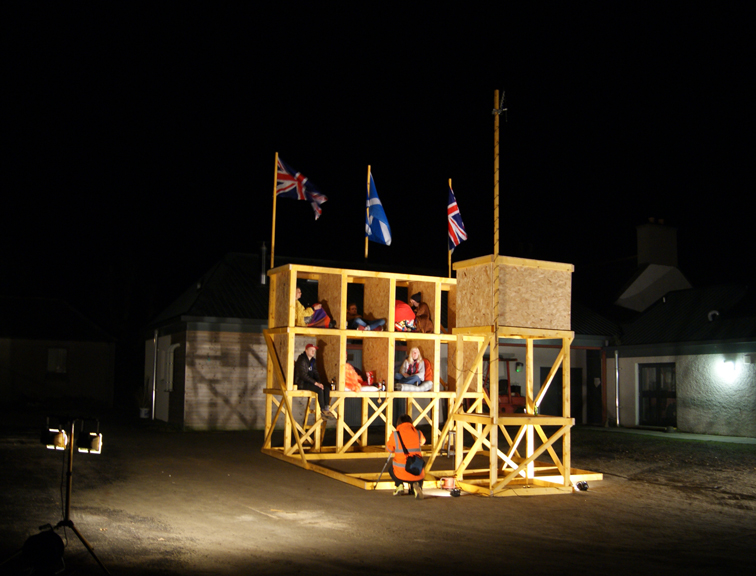 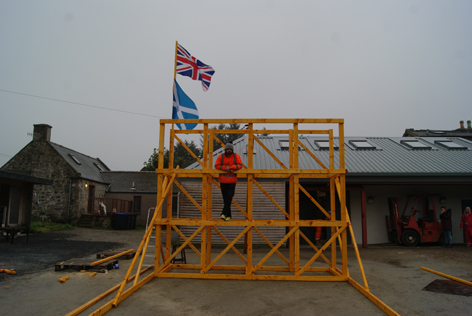 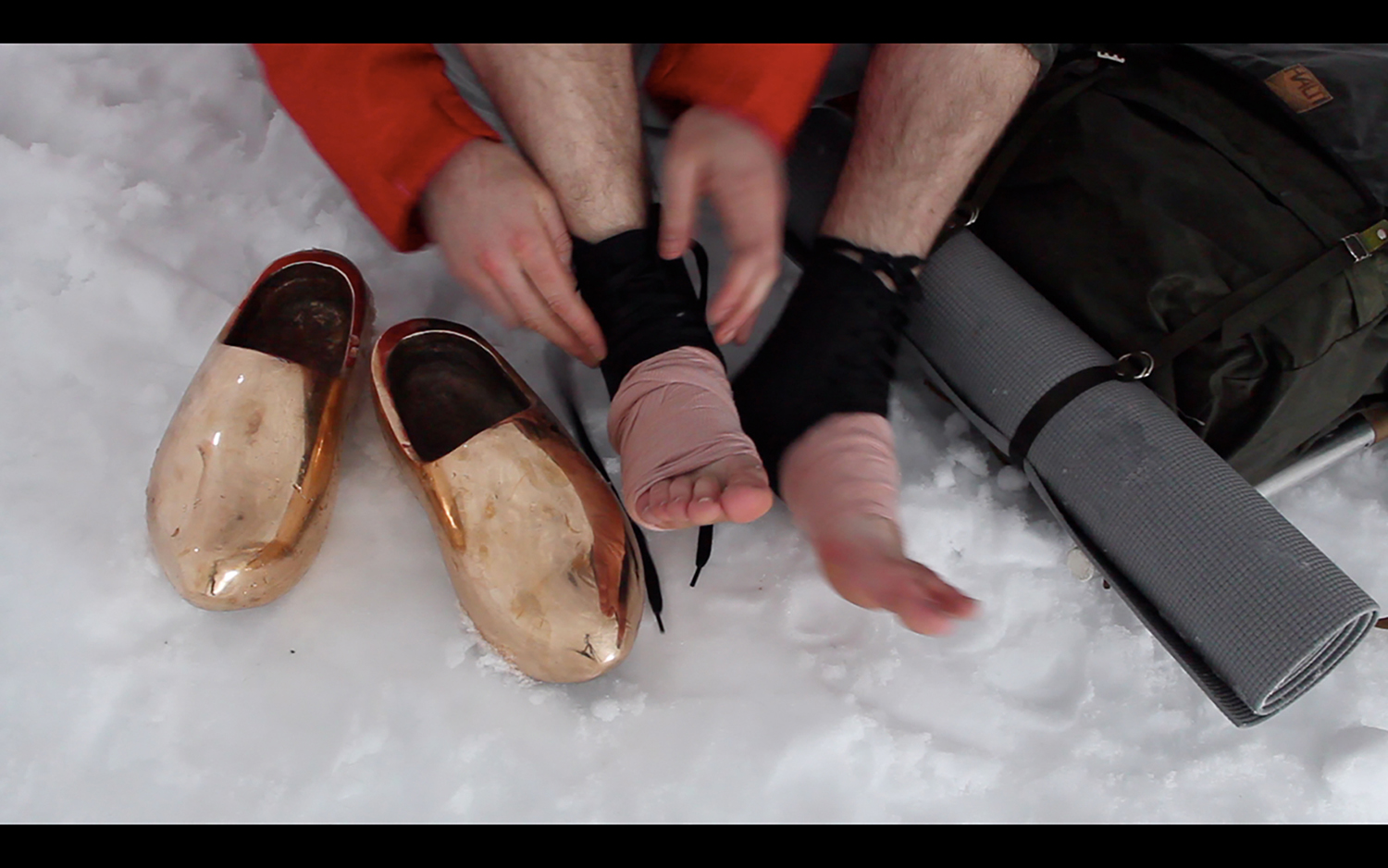 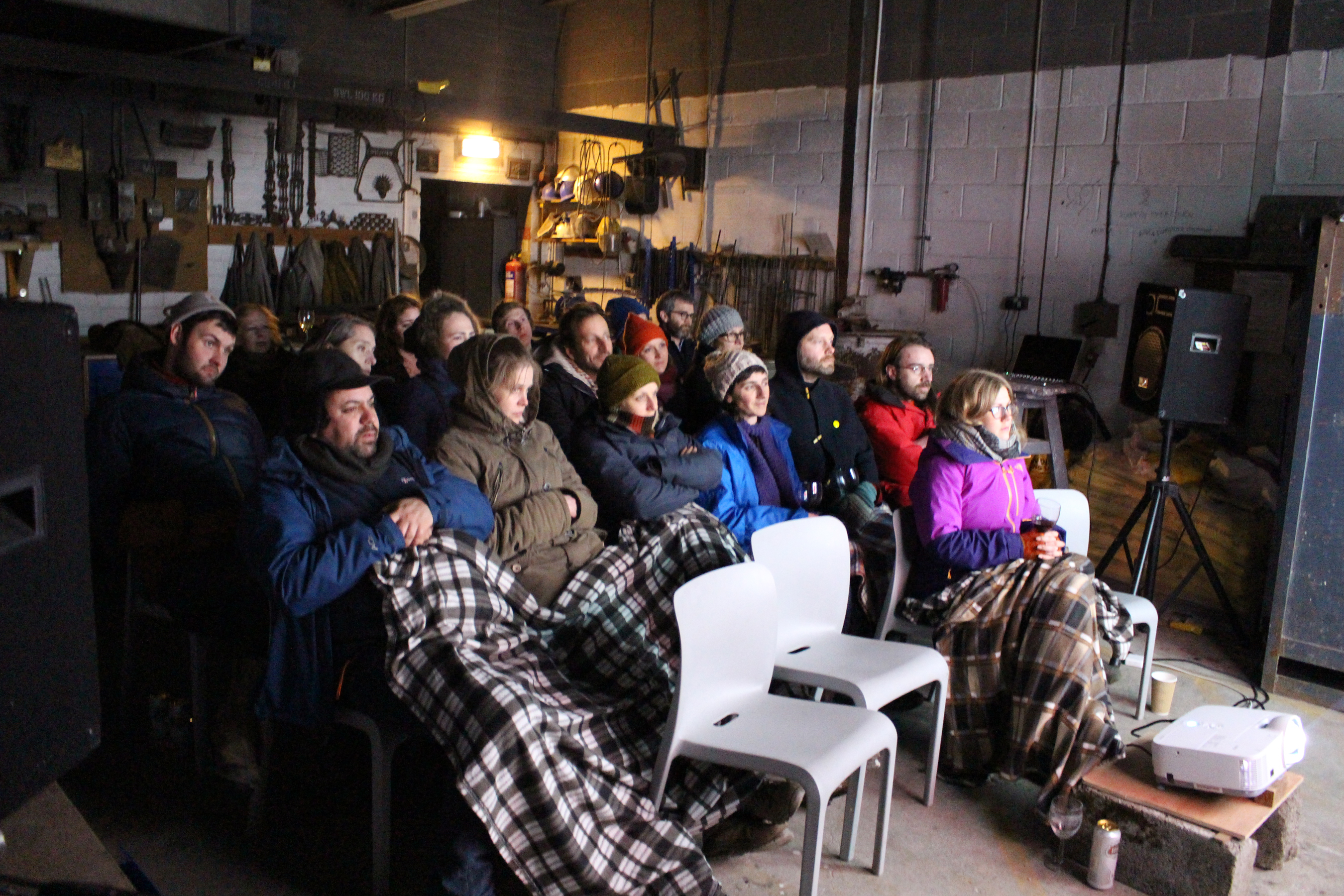 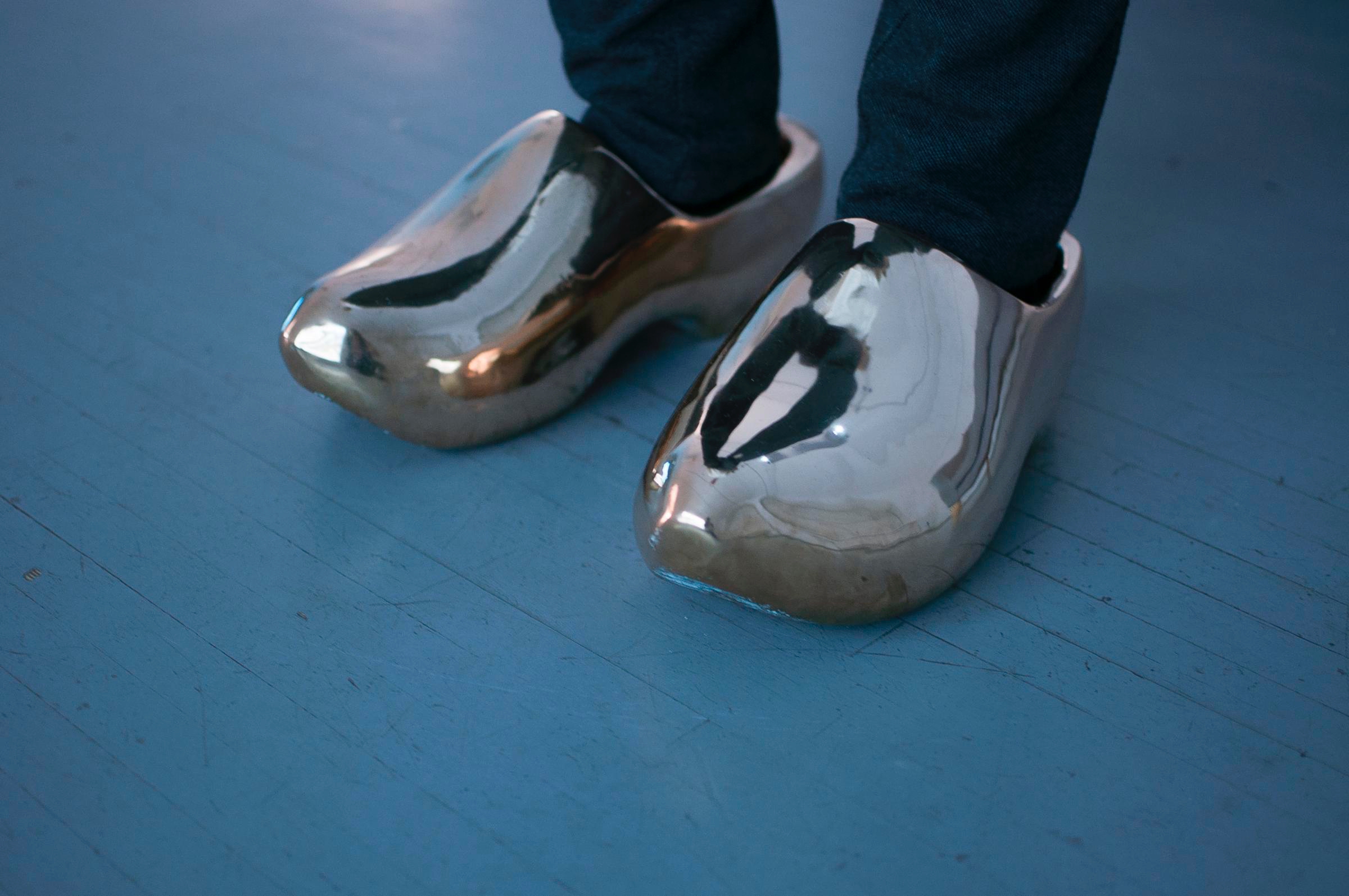 Carl Giffney‘s work as a visual artist investigates social capital through empirical and performative research, carrying out activities like mining, beekeeping and modifying cars. He works in eclectic settings which have recently ranged from sea horse farms, to churches to motorways. Physical materials play very important roles in his socially engaged practice.

During his FiR residencies, Carl produced a film entitled I really don’t feel them. Part of this work was filmed during an event at SSW, WATCH THE SCOTTISH INDEPENDENCE REFERENDUM RESULTS WITH ARTIST CARL GIFFNEY.

I really don’t feel them

I really don’t feel them is a feature length documentary in HD + stereo made by Carl Giffney across 2014 and 2015, it is shot in The Netherlands, Scotland, Finland and The Arctic. It spans three FiR residencies at: HIAP, The Scottish Sculpture Workshop + Mustarinda.

“The film is centered around a very special pair of shoes. The film opens in The Netherlands. That’s where the shoes are from- Holland. They are clogs you see, but not just any clogs. We move to Scotland, where the shoes are being made.  They are made of bronze. They are being cast at a foundry. There is a full moon rising. As the bronze and molds are being prepared, the furnace is lit. At the same time in Scotland there is a vote going on about National Independence from Britain. We see the votes being counted and the results collated on live TV. A small crowd watches the results. The bronze is poured. The vote turns out to be a ‘No to Independence’. The shoes are cast. The full moon retreats. The crowd disperses.

So that’s how these shoes become so special. They come to embody an event of collective dependence, as apposed to independence, through means usually associated with mythology or witchcraft, a theme that runs through the video. The dependence that the bronze shoes embody through their sheer physical make up is also quickly clear. They weigh in at 27 KG, so are difficult to lift, let alone to wear. They are polished to a golden mirror finish and reflect everything. They are cold and slippery and beautiful. We move to Finland, where we see them being worn by me on a winter journey North into the Arctic in search of the Saami people. I am hitch hiking, bussing and driving over 850 kilometers. My aim here is to ask these people, who I imagine have very specific opinions of independence, what they think of the shoes that I am wearing.

That’s essentially the experiment of the film- to make a pair of ‘dependence shoes’, travel up Finland in them, and ask the Saami what they think of them. Its central concern is in how we place ourselves, or lack to place ourselves, within traditional and new social contexts to do with independence. How do things happen around us? Things that are much larger than us and we have little connection to. It’s a documentary film that follows a series of performances that all probe those issues within a European framework.

In many different ways it asks, how does dependency work in a collective sense? It asks these questions, as questions that are broad, but are also ones that are essential to understanding climate change- things to do with dependency and big scenarios happening that involve so many people. I feel an impeding motion through the film- one of huge things happening in front of us -as if we watch. This inability to place ones self within a social capital is at the core, but it’s a positive film too. We see young people taking up old and new pursuits. Musically, it features some Saami rap, psychedelic house and rune singing. A sense of generational shift is strong, one that does continue tradition but only some parts.”

View ‘I really don’t feel them‘ in full: here