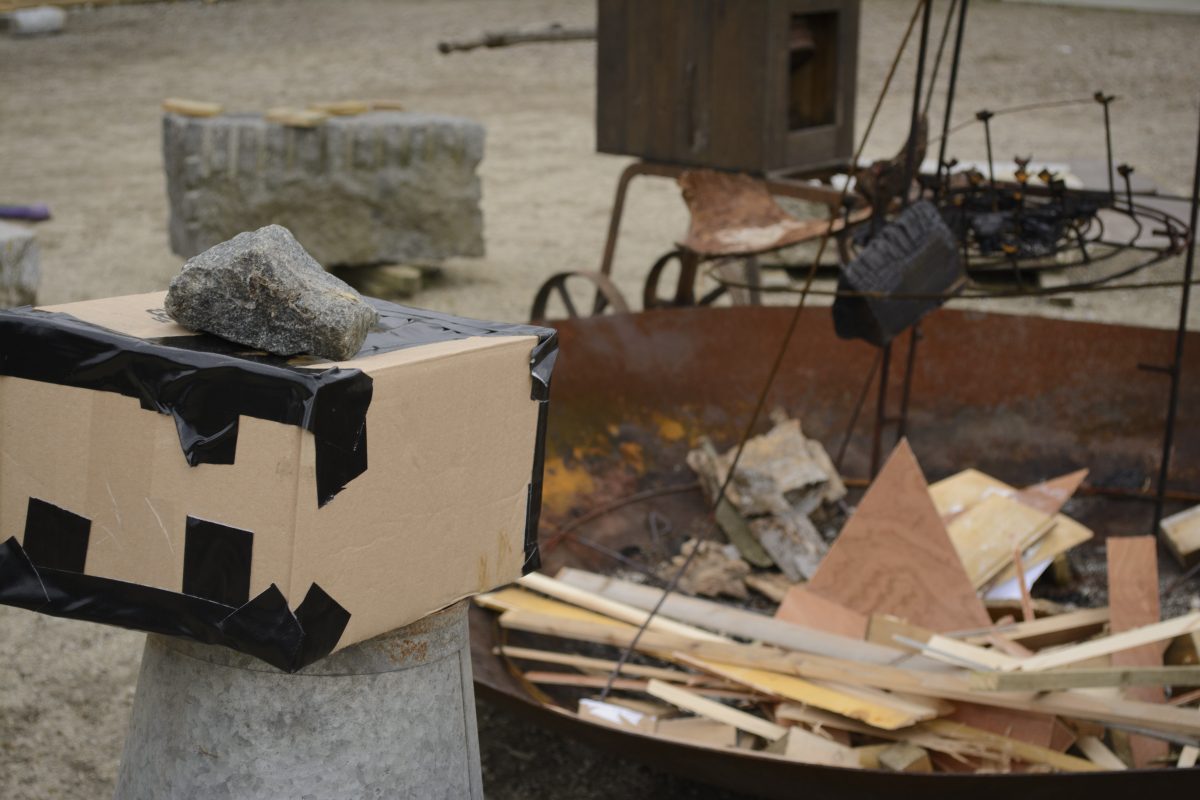 The third instalment of our Artist-Led Activity: Exchange Residency programme this year took place in August.

Over the month, Kelley O’Brien explored the myths and folklore of the Scottish forests, hills and soils, noting where terrain has been worked by human hand and where wilderness has left room for imagination and future mythologies.

Kelley then led a workshop with the Lumsden Community on the 16th August. Together, the group made their own pin-hole cameras in order to capture the village. Upon their return to SSW they developed their images and wrote their own future mythologies inspired by their photograph, no matter the outcome of the image, to share with the group.

Kelley O’Brien has wrote a piece summarising her research of forklore and mythologies within the Scottish landscape in more detail:

The Scottish landscape is ancient and affected by thousands upon thousands of years of human intervention. It is a place of magic, madness, reflection, hubris, and mankind’s vain attempts to thwart death. With most of its terrain farmed, carved, cut or grazed by the Scots there are few remnants of a time in which the woods and mountains reigned king. The landscape can be best understood through three main aspects: the mountains, the forests and the soil.

The Cairn Gorm Mountain range looks more like small hills, worn down by centuries of souls wandering through their peaks and valleys seeking truth and inspiration. Formed over 40 million years ago before the last ice age pushing past histories to the surface these mountains reveal more about what came before them than the present. Found only around the base of these mountains is a stone prized for its color and storytelling techniques. The Rhynie Chert is 410 million years old and their exceptional ability to preserve the fossilized remains of plant matter and bacterias makes them treasure to scientists.

The Scots Pine travelled to Scotland 9,600 years ago and took root to produce some of the most dense, beautiful and mystical forests on earth. The prophet, madman and wizard Merlin found refuge (some would say punishment) in the Caledonian Forest after watching his lord killed before him in battle and sentenced himself to a lifetime of wandering the wilderness. Though now these woods have been depleted to 38 small slivers, representing 1% of the original forests, they have become a space for reflection and short easy hikes, their magic remains in the few ragged trees unaffected by human intervention.

Am Monadh Ruadh, or The Red Hills, the Gaelic name for the mountains speaks more of what’s found within than above. The red soil of this land contrasts the mountains sharply while providing the nutrients that would lead to the landscape’s demise. This land was quickly settled and shaped into the inauthentic experience sought after by highland tourists and cultural preservationists. Humans have attempted for thousands of years to domesticate and organize the Scottish highlands leading to constructed landscapes that are equally unnatural and bowing to the forces outside of our control.

We as humans continue to systematize our environments in a vain effort to exert some sort of control over the uncontrollable. In moments of panic we resort to these methods to bring order to the chaos that is the world around us. The work produced during my month long stay at SSW is a compromise with the systems we are entrenched within. One through which we can relinquish control when we can and feel empowered when we need to.

The reconstructed landscapes I produced take their form from Merlin’s (as well as other mythological stories’) descriptions of the valleys, mountains, and mystical forests in an attempt to find truth and understanding through reenacting and experiencing history. My practice is an on-going attempt to rectify our understandings of history and mythologies as directly impacting the present. Myths play an important role in the ever-present need of man to organize and systematize our environment to explain that which is beyond our comprehension.

Through the participation of local individuals the workshop, Myths in the Making, focused on relinquishing control in the process of documenting our world through pin-hole cameras, then attempt to articulate the unidentifiable through the constructions of myths related to each image. The myths written from participants ranged from the naming of Lumsden, the lore of an infamous cat lady, how the mist is cleared after a storm, and a portal to the undead who feed on our loneliness. These myths of a current era can provide a new perspective on how we view our environments, our community, and our world.

I thank all who attended, participated, and helped make my residency an amazing experience. Special thanks to Sam, Yvonne, Andrew, Eden, Uist, Vivian and the Joes, for all their assistance in organizing, producing, ideation, inspiration, and experiences.