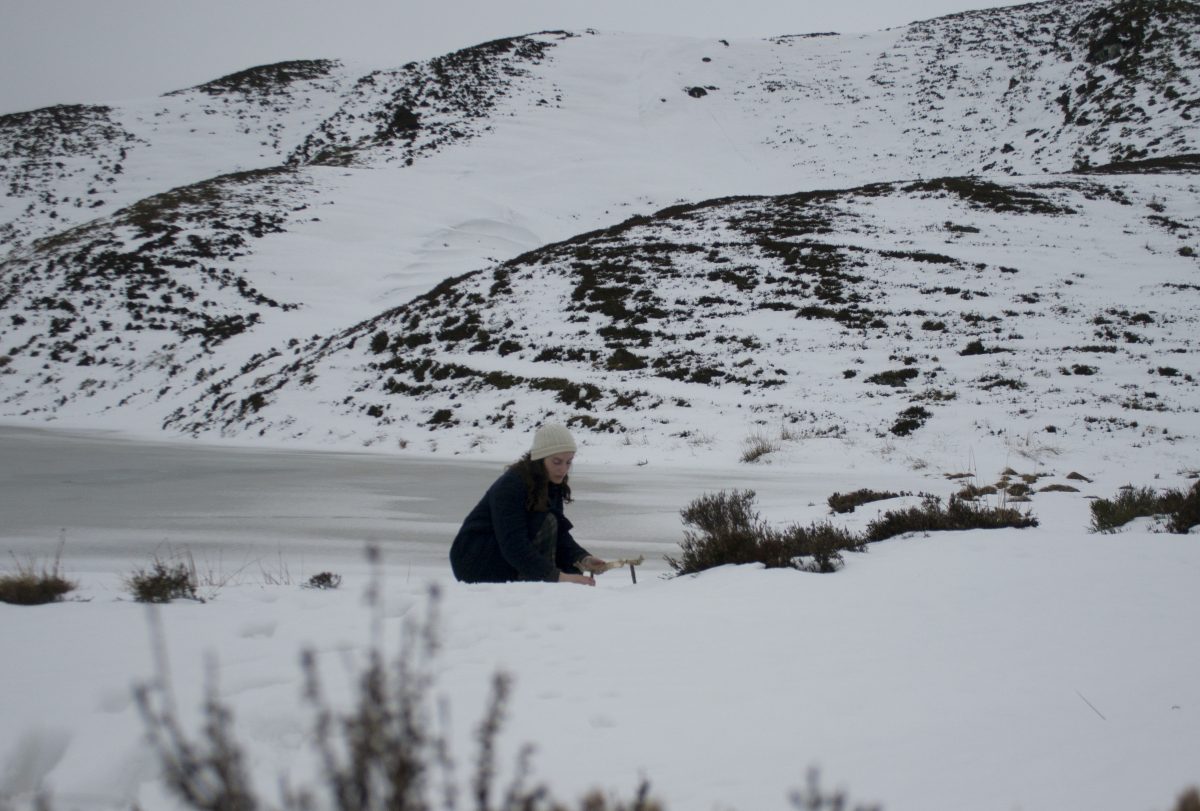 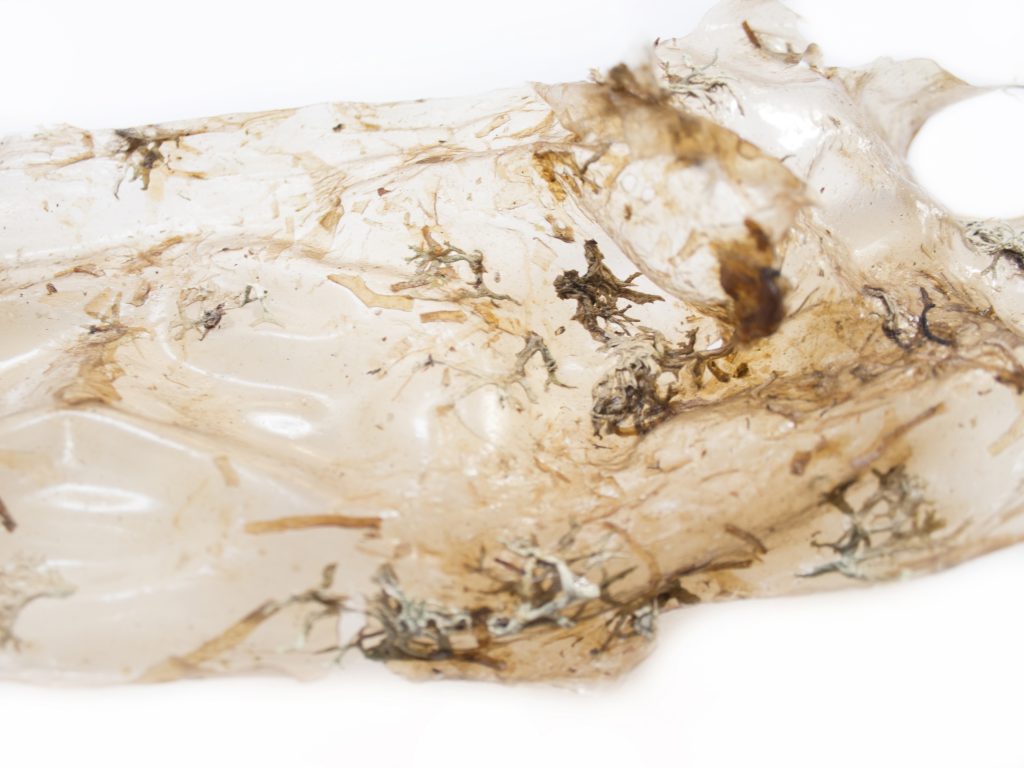 An attempt to interact with the local environment of Northern Scotland and its different species through the medium of bioplastics.

In the current atmosphere of realisation to what extent our impact on the planet has been destructive, the need to explore an alternative lifestyle, both through our use of everyday materials and our psychological approach to our environment is urgent. Although bioplastics are becoming a popular material for designers to explore, it is still a little slow to enter the fine art world. Yet as an artist concerned with our place within the environment it feels apt to incorporate in my practice new materials which take into consideration natural welfare. In Donna Haraway’s words:

The Elements:
– Bioplastics. Made using a very simple recipe with algae. Elements from the local environment were included in the recipe to add texture and colour, such as the Scotch broom plant which yielded a dark green dye. In order to reduce the recipe footprint, Irish moss algae, which grows in the UK was also included as a biopolymer. 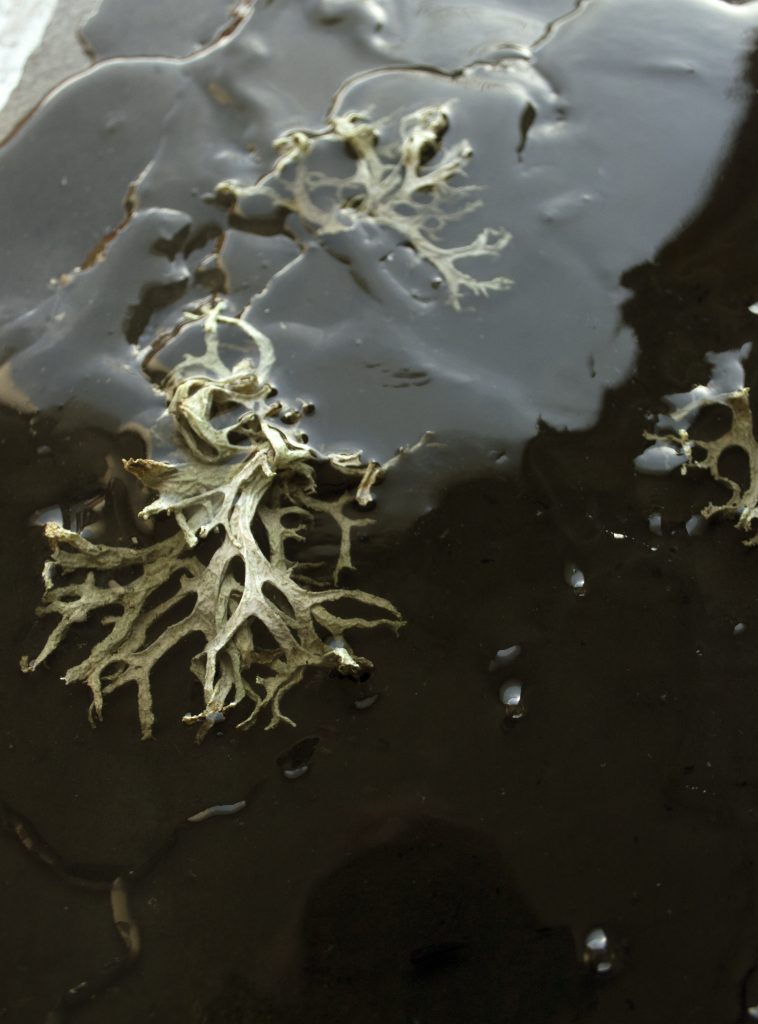 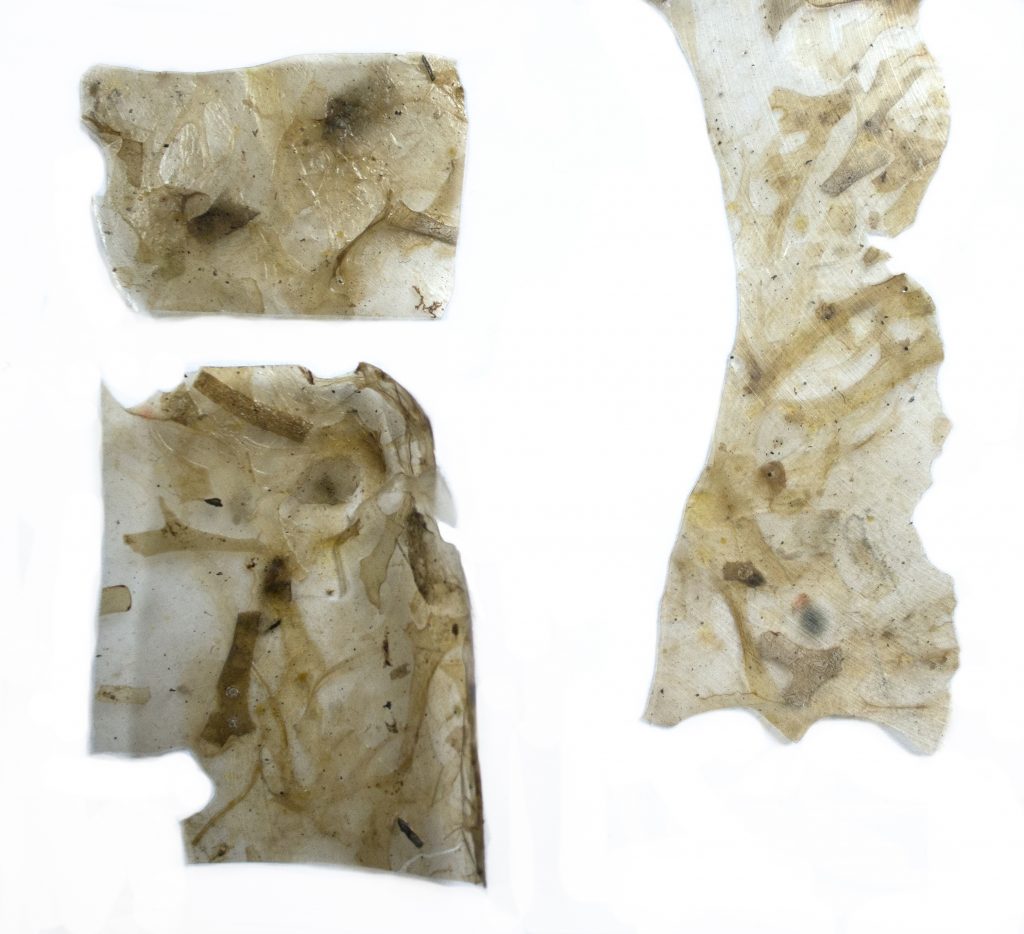 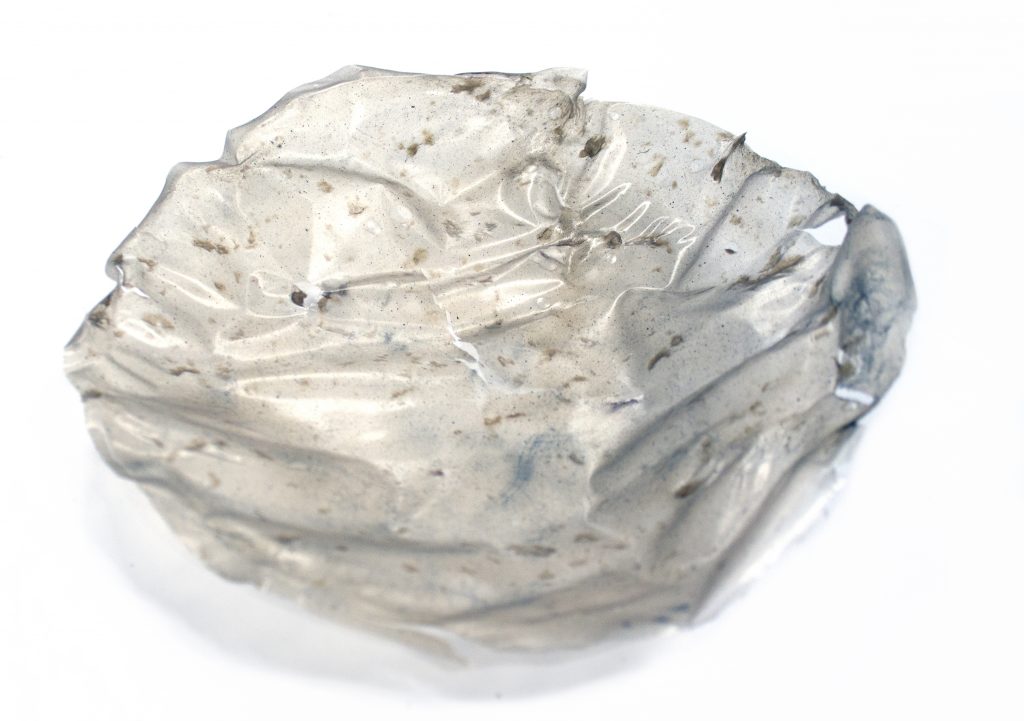 – Lichens. These became a major part of the research. Struck by the abundance and variety of species locally, I also found out they are eaten by an array of animals, such as deer and the larvae of a number of Lepidoptera species (butterflies and moths), they are also used as nest material for a variety of birds (such as the long-tailed tit), and certain  species of lichen yield different colour dyes too. Finally, they represented to me a multi-species world in which the poetics of sympoiesis (2) captivated me. 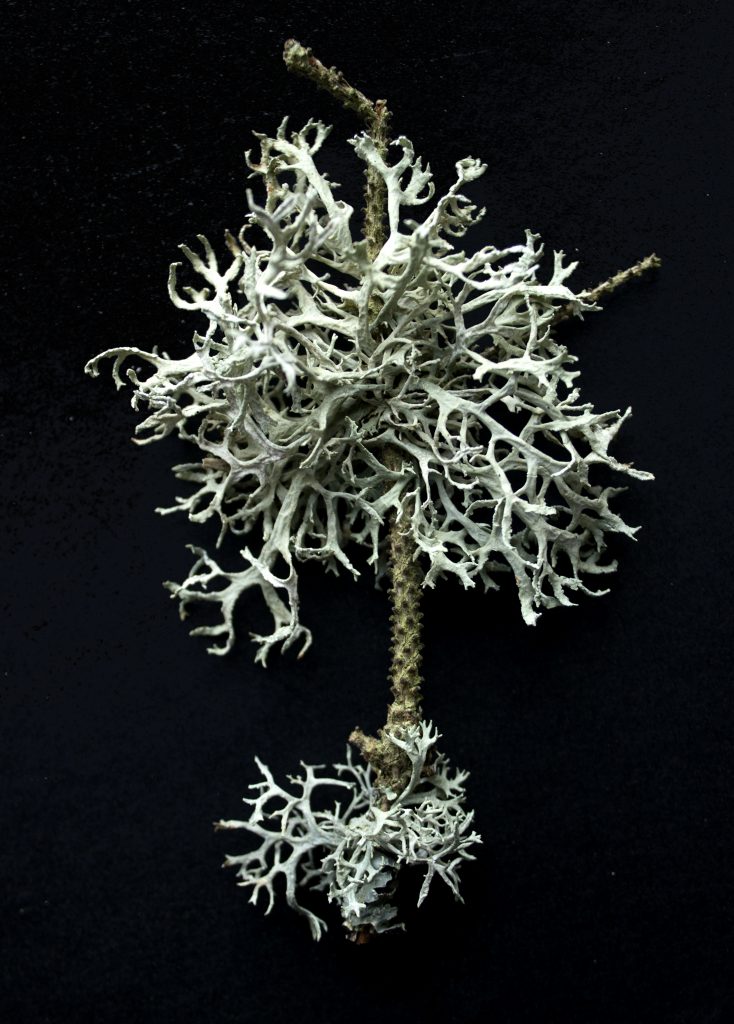 “What was once thought to be a mutualism involving two species may be an entangled symbioses of thousands of species, interacting in every conceivable fashion… while we are far from a perfect understanding of the natural history within lichen, it is clear that
lichens are worlds into themselves.”(3)- Bodies of water. Points of water were chosen to leave the bioplastic next to – as their environment is rich in vegetation and animals tend to come by to quench their thirst. There the bioplastics were left for a night or two with a wildlife camera trap to monitor how the plastics interacted with the environment. A lowland lake was chosen as well as a highland lake/tarn, in order to compare the different biomes (4) and how the plastic was impacted by them.

The Outcome:
An unexpected weather turn during the residency limited the outdoor work. A cold spell dubbed ‘the Beast from the East’ brought icy winds and snow from Siberia. All bodies of water froze and the installation of bioplastic pieces became difficult. Some attempts were however still made, with nevertheless interesting results. During the first attempt by a lowland lake, the camera, attached to a tree trunk, slightly shifted (probably due to wind) and recorded tree branches moving slowly with the wind.

On the second attempt the camera was secured lower to the ground, and many species were recorded going past, such as pheasants, pigeons, and a red squirrel. Then jays came and ripped the bioplastic embedded with seed to access the food. The bioplastic when
collected had become wet from the sleet, and was found in various small pieces on the ground. It has served a purpose of feeding wildlife and started its decomposition process.

The tarn experiment was a different challenge. Knowing deer roamed around that area I used a lichen embedded bioplastic piece with the addition of extra lichen on top when installing it to attract the deer (as lichen is winter food for them). Two days later I returned and found the camera lying in the heather. Footage shows a wild rabbit coming and going in the first hours, then a 40mph wind rose. The camera fell on its side, away from the bioplastic piece, and recorded hours of heather dancing in the wind with the top of the hill as a background. These findings were at first a little disappointing. The lichen-bioplastic was set up to attract the charismatic deer, and the camera was supposed to record them sniffing or gnawing at the bioplastic. But the more the heather was dancing on the computer screen the more it became evident this recording was still an important part of the setting. The weather and the heather are key players in the tarn environment and deserved to be recorded as such. When the bioplastic was collected it showed tears and strains from the weather. It had lived two nights in the highlands with a 40mph wind. This experiment was in collaboration with nature, on nature’s terms. 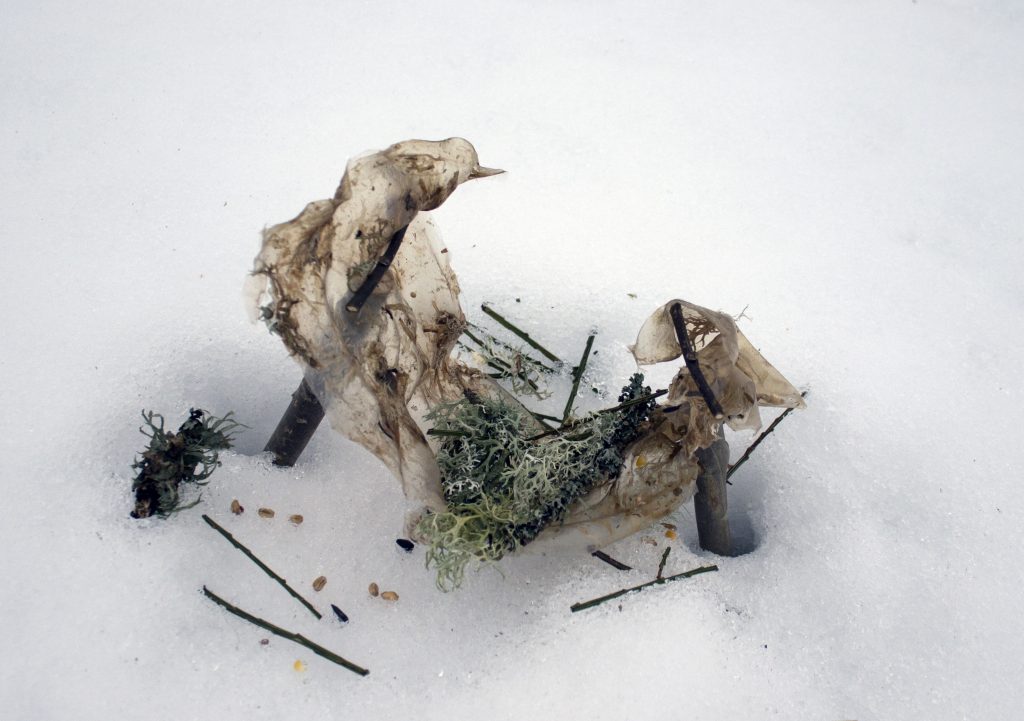 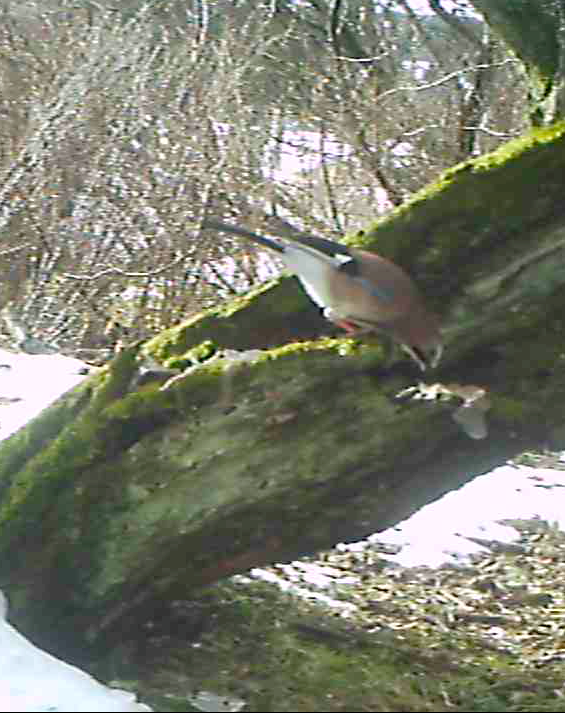 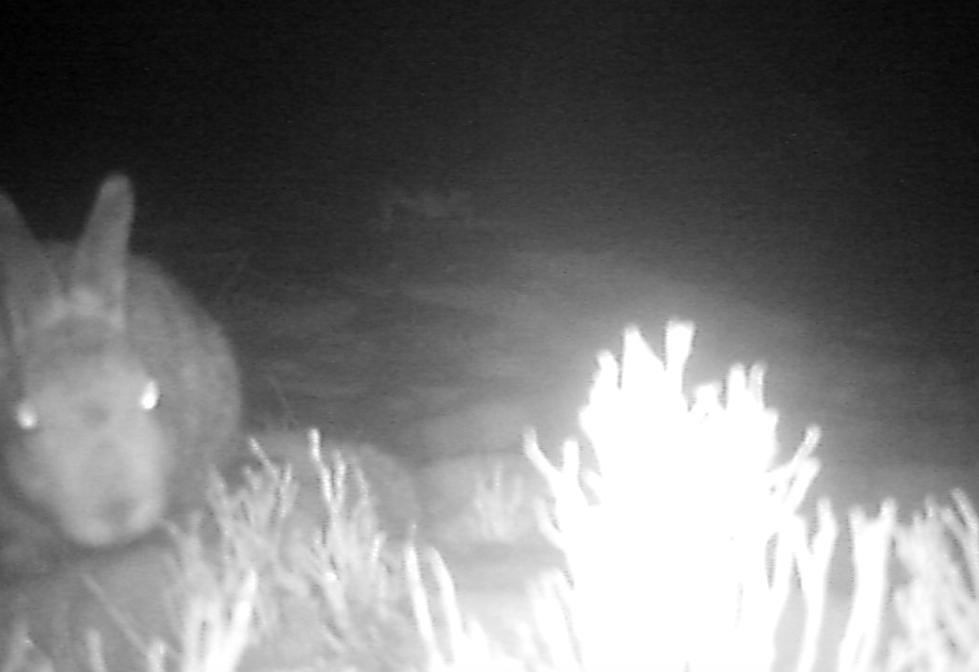 (1): Haraway D. (2016) Staying with the Trouble: Making Kin in the Chthulucene, Duke University Press.
(2): Sympoiesis definition: collective creation or organisation (wiktionary), making-with (Haraway).
(3): Pringle, A. (2017) Establishing New Worlds, The Lichens of Petersham, Arts of Living on a Damaged Planet, University of Minnesota Press.
(4): Biome definition: community of plants and animals that have common characteristics for the environment they exist in (wikipedia).