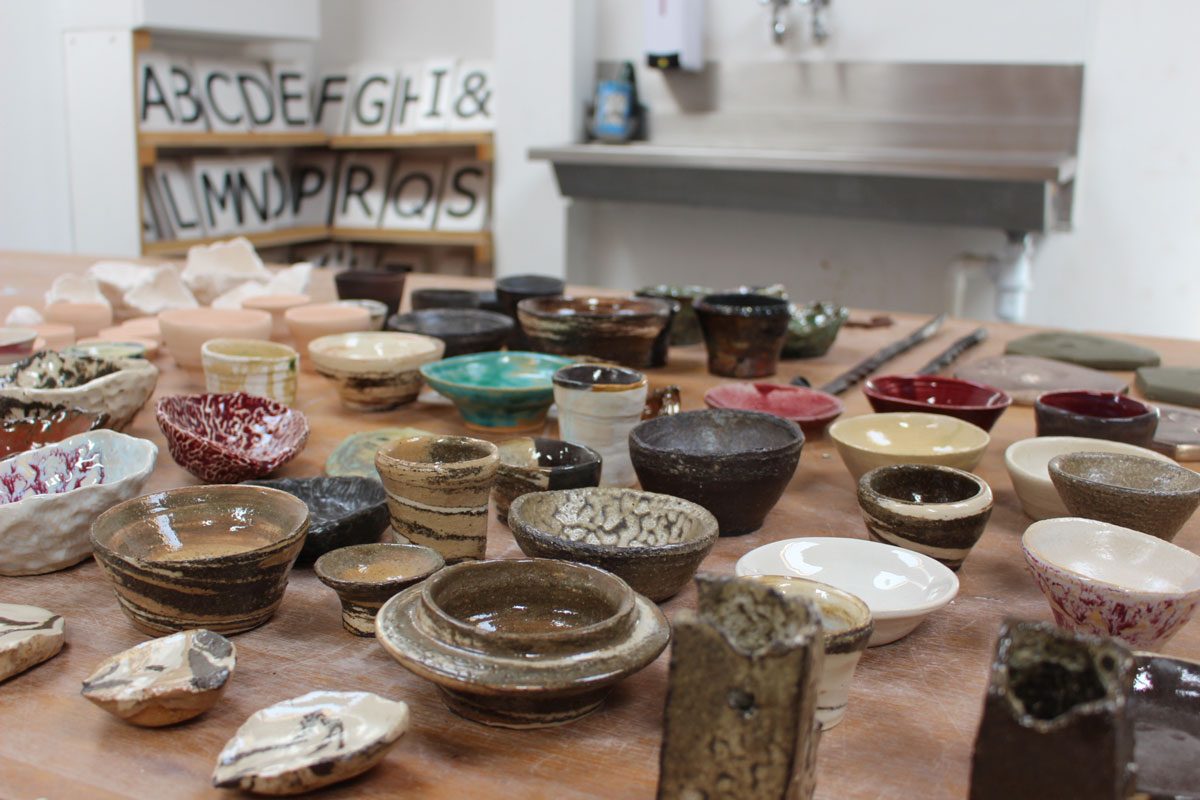 In June this year we were glad to welcome the first of our 2020 Summer Residency artists, Robert Foster and his family, one year later than originally planned due to COVID-19. Here Robert writes about his experience on residency at SSW, including being an artist-in-residence with a young family and his experiments in the ceramics workshop.

Thanks for sharing this Robert, and we look forward to seeing what comes next for you all!

For the month of June, I was in residence at SSW accompanied by my partner Becky and our 8-month-old daughter Olwen. This was our first residency together as a family, having been deferred since 2020 due to Covid-19, and brought an element of the unknown as we worked together to discover how best to juggle work, childcare and other commitments during our time on site.

My work focussed largely on ceramics and the process to create Agateware, pottery formed by marbling together different clay bodies, or coloured clays. The SSW ceramics studio provided an ideal space to learn and experiment, helped greatly by the advice and guidance of ceramics technician Beth, allowing me to develop a better overall understanding of ceramics, as well as some of the nuances of glazing, throwing and hand-building.

Through the various experiments, I allowed myself to be influenced by the vivid surrounding landscape, resulting in a series of organically shaped and methodically carved out hand-built vessels, which I will be keen to expand on in the future once back in my studio at Wysing Arts Centre.

In my final week on site, I was fortunate to take part in a Raku firing, a process of smoke firing ceramics, leading to beautifully organic and unpredictable results. This was a real discovery for me, both in the performative actions of the process of the firing itself, but also in the limitless possibilities that Raku offers.

During the residency, I was able to explore the other facilities on site, trying my hand at some blacksmithing in the forge and, thanks to technicians Eden and Michael, was taken through the process of bronze casting in the foundry; both completely new ways of working for me. I was struck by the primal nature of the process of transforming metal, which seemed to evoke a connection to the archaeology of the surrounding area and the ancient communities whose trace is still so present locally.

From the moment we arrived, we were welcomed whole-heartedly and made to feel part of the wonderful community on site. Now back at home in the rolling, pastoral countryside of Suffolk, the rugged and elemental landscape of Aberdeenshire seems a distant memory. However, our time at SSW has left an indelible impression through the exchanges and new experiences made possible by the support and guidance of the team, providing lasting inspirations to carry forward.