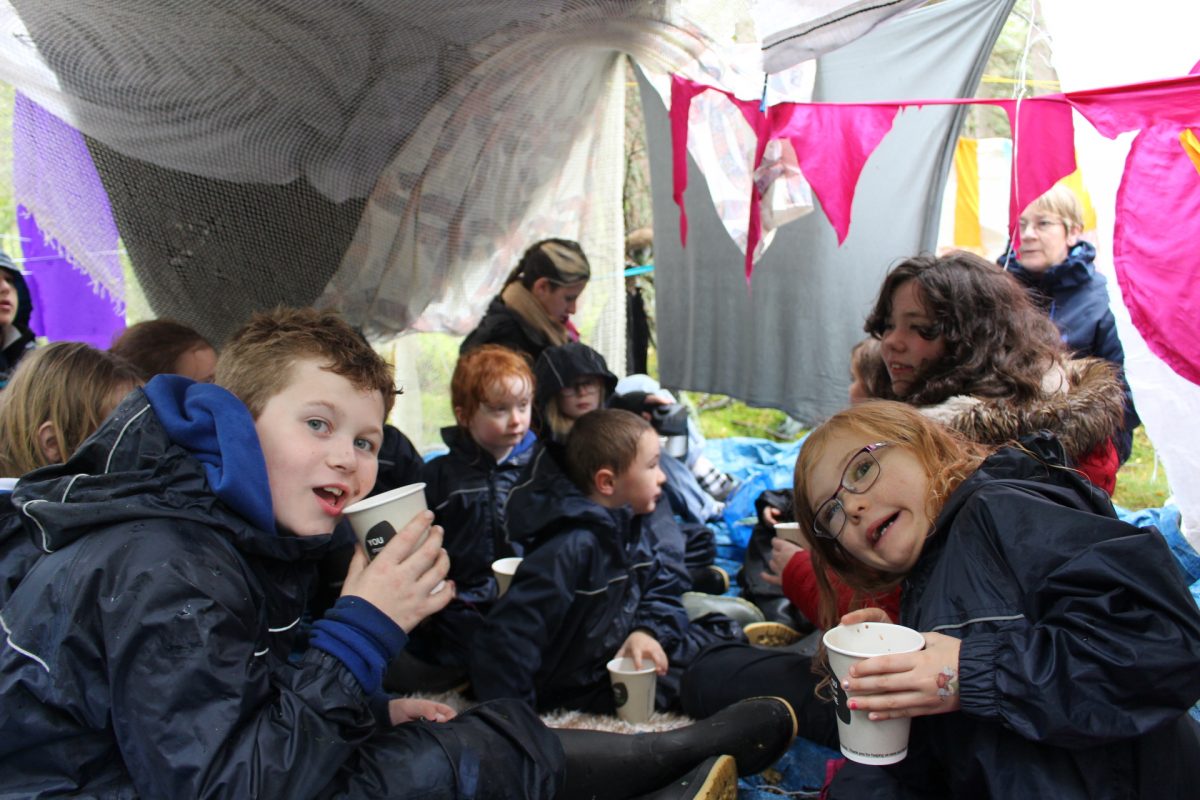 Our third Lumsden Residency artist of 2019 is Eothen Stearn, whose practice roams between the intimacy of personal relations, the details of everyday life, music, feminism and science fiction. Bringing these diverse interests to SSW, Eo worked together with the pupils at Lumsden Primary School to build a den, thinking about it as collectively making a multi-sensory environment, or installation, in the local woodland.

Eo joined us in September 2019 for a month-long residency alongside the last of our Summer Residency groups this year. Throughout her time on residency, Eo wrote a diary. Here we share some of Eo’s diary entries with photos of the workshop.

Eo will return to SSW in November to share some outcomes of this workshop alongside Lumsden Primary School students at our 40th anniversary celebrations.

“The 12 children paired off to walk along the road holding hands. An older member with a younger. I felt bad as the youngest got tired on route, what seemed not so far to me was a real distance for his little legs. He was also jumping into every puddle on route burning more energy. At one point he tripped up and his older sister yelled from the back of the line YOU OK?!?!?!? I thought about how we learn to preserve our energy in relation to daily tasks.

We began to build the Den it was hard fighting against the rain. When we did eventually make some headway the youngest grabbed this small fluffy sheep skin and curled up in the middle saying he was going to go for an immediate nap. I felt bad for tiring him out, but also amazed by this tender gesture. He was like a baby Messiah or something on this swaddling. He was so cute, but I also worried I’d pushed him too far.

I had previously set up a metal senses mobile (plasma cut eye, nose, mouth, hand, and ear) in the forest nearby it was balancing by suspense rocks and 2 mic stands, getting rusty with the rain.

When making the Den, one of the first instinctive things that the children did was to make their own flags. An unprompted act.
The children said the space reminded them of SHELTER, SAFETY, SUPPORT, STRUCTURE, ART & MAGIC but also territory lines.
To many their flags symbolised a Nation, albeit communal, a kind of ownership.

We began to make some music. Passing random percussive instruments, swapping halfway. One girl did an Elvis cover of “Blue Suede Shoes” it was so good. Really wonky with the rest of us. I appreciated her bravery in singing out. She later wrote a song about the rain with that excellent imagination of hers….
We had hot chocolate and I spoke briefly about den building in relation to installation art. They all said THANK YOU EO! And my heart melted.
On the walk back one girl said she was going to build our den on the video game Minecraft. This felt very conceptual to me and not in my thinking trajectory at all!

I went back alone to pack it down. I filmed and photographed the den. The rain played on the skin of a drum. I lay under the shelter and looked up at the fabric and clearing. I was soaked through, but something was slowing me down telling me to spend time in this charged space. All of the fabric was so heavy from absorbing the rain. It felt so different without the wild childlike energy. The space had become more sinister.

Untying, untangling and unwrapping all of their doings made me think about about my own childhood growing up in the countryside in a village smaller than Lumsden. Moreover, remembering being small and the joy of experiencing things for the first time. How childhood nestles in our brains throughout life. Accompanying present time, passing. Our bodies move forwards but time is not intact. The threads around the trees made me think of non-linear monetary time and futurity.”
* * 18th September 2019.

Eo would like to say special thanks to the kids and teachers of Lumsden Primary School and all at SSW.