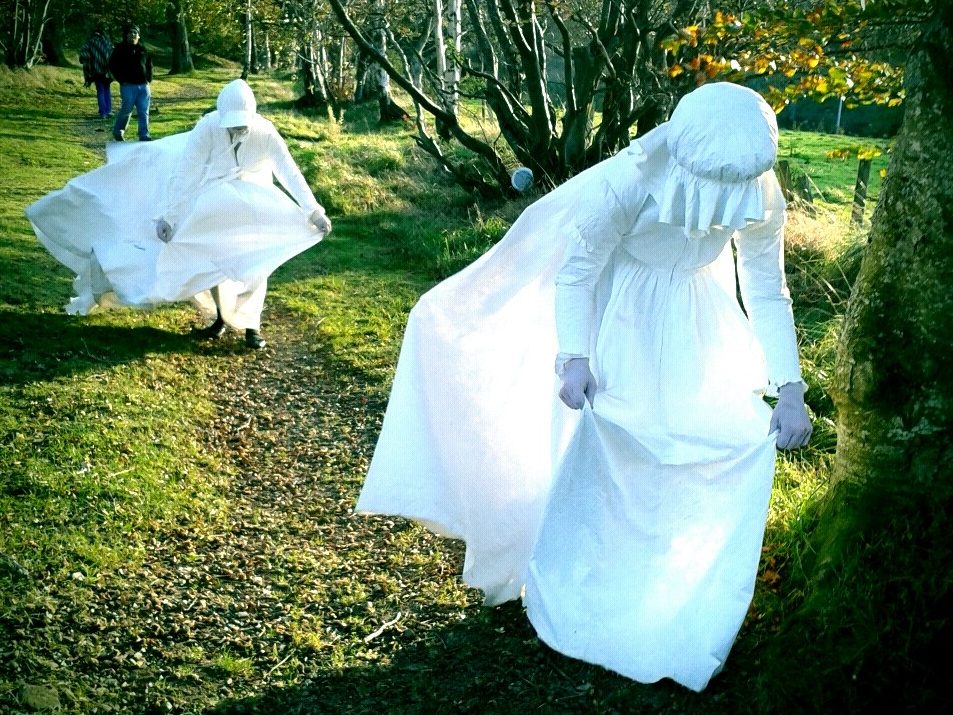 On Saturday 25 October 2014, SSW hosted the first performance event at the former Lumsden Sculpture Walk. Led by Dudendance Theatre, the dramatic performance was an adaption from their Borderlands project, utilising the beautiful backdrop of the Buck, and exploring the site of the walk, including the Neolithic burial mound at the southern end.

The performance was part of the Sculpture & Landscape enquiry, an investigation into sculpture trails and walks, and public art practice in the 21st century. This included looking into the rejuvenation of the Lumsden Sculpture Walk into a community green space, and the re-envisioning of how a small stretch of land along the edge of the village could become an open resource for all members of the community, including the artists in residence at SSW.

Dudendance brought together performers and participants from the local community for the event, creating a highly visual landscape theatre, with costumes designed by Heather MacCrimmon. Dudendance create site-specific dance theatre, which has recently included socially engaged work in the landscape. Borderlands work focused on the exploration of borders, disputed lands and visual interpretations of invasion and conquest.

In the context of Lumsden, the focus shifts to a land that has been inhabited for countless generations, with the final settlement of Lumsden in 1825. This present landscape has been formed through these generations stretching from the stone-age, through the invasion of the Romans to the Pictish kingdoms of approx. 600-900 AD.  More recently, the landscape was contested through the Highland Clearances, which brings us to the present day initiation of the Land Reform Act.

Inspired by paintings of the Renaissance, the costumes by Canadian designer Heather MacCrimmon are stylistically a combination of ecclesiastical wear and armor – designed for shape shifting and flow of movement. The slow meditative pace and sculptural quality of the performance unfolds around the audience.