Looking back at the Darkness and Isolation Residencies 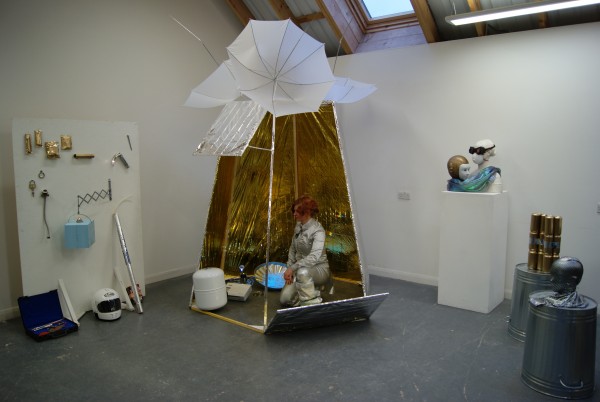 Artists Helle Bjerregaard, Jane Brucker, Catharina Golebowskie, Petra Vergunst, Jack Vickridge and Harriette Yarrington joined us for the Darkness and Isolation Residency, which ran from January to February this year.

While Mars might seem literally light years away from us, Aberdeenshire is actually home to the only known source of Macaulayite in the world. Macaulayte is rich in iron, with a distinctive red colour, and is being studied by NASA as the most closely related to mineral to those on Mars found on earth. Inspired by the call out for Mars Big Brother, Catharina shows us her new space pod, fashion wear and accessories.

Harriette spent six weeks working meticulously on recreating the skulls of a number of species facing extinction, including the Scottish wildcat and Capercaille black grouse, to be cast into bronze in the SSW foundry.

Helle Bjerregaard is a recent graduate of the Royal College of Art. Using the space and freedom of SSW, Helle concentrated on a body of work using raw leather.

Here are Catharina, Helle and Jack, relaxing after the artists presentations. We started with a Valentines Day pot luck lunch, and finished with a presentation from Jane.
Jane works with the Alexander Technique, and in collaboration with Petra, they led a workshop at the Alford yarn shop Albayarn. Unravel is a workshop Jane has held in various locations throughout Europe and the US, and using the principals of meditation, it focuses the processes of doing, un-doing and re-doing. Petra presented poetry that she had written especially for Unravel while the group worked on unravelling and spinning.